But with experts predicting 90 per cent chance of El Niño, uncertainty looms over monsoon’s progress

But with experts predicting 90 per cent chance of El Niño, uncertainty looms over monsoon’s performance 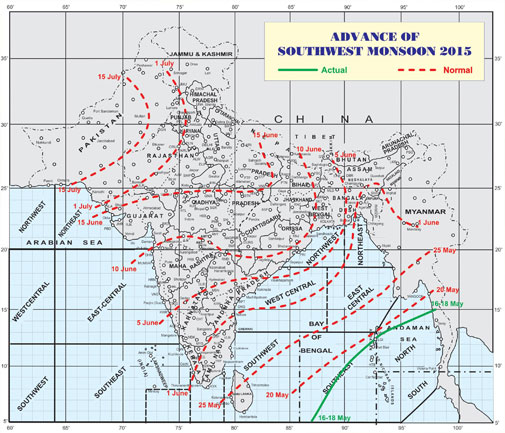 India’s much-awaited annual visitor, the south-west monsoon, has arrived at its first destination—Andaman and Nicobar Islands. On Saturday, May 16, the India Meteorological Department (IMD) announced that the monsoon advanced over south Andaman Sea, Nicobar Islands, some parts of south-east Bay of Bengal, north Andaman Sea and Andaman Islands (see image above). As per IMD, as of May 18 afternoon, the northern limit of monsoon continues to pass through 05.0°N/ 86.0°E, 10°N/90.0°E, Long Islands and 15.0°N/98.0°E. Usually, the monsoon reaches south Andaman Sea by May 15, and hence, as expected, it has arrived on time in Andaman and Nicobar Islands region.

For declaring the monsoon onset in Andaman Sea and Andaman and Nicobar Islands, IMD considers some basic conditions such as rainfall in these areas and direction of near surface winds. A nice flow of the near surface winds has been established between the southern Indian Ocean and northern Indian Ocean (particularly, Bay of Bengal). In a previous blog I had explained how the monsoon winds originate in the southern hemisphere, cross the equator and then move towards India. Such a textbook flow is called cross-equatorial flow which is well established now and will be strengthening in the coming days. This will enable the monsoon to cover more parts of the Bay of Bengal region in the coming three to four days.

On May 14, IMD issued a press release  on monsoon’s onset in Kerala. The Met officials are expecting the monsoon’s arrival in Kerala on May 30 (onset window between May 26 and June 4). For declaring the monsoon's onset in Kerala, IMD has well-defined criteria. As per the present situation, the wind field parameter isn’t in the acceptable range till May 30. But, the long range weather models indicate improvement in the situation from around June 1. Hence, if IMD decides to strictly follow the onset parameters, onset in Kerala would be declared by June 4. However, a weak onset phase is anticipated in Kerala and nearby areas.

Weak to moderate El Niño conditions are well established now in the equatorial Pacific Ocean as per Climate Prediction Centre (CPC) of USA’s National Centers for Environmental Prediction (NCEP). As per Bureau of Meteorology of Australia, early stages of El Niño are appearing. Unlike last year, the Pacific Ocean and atmosphere above it are “in sync” now. Both Australian agency and CPC-NCEP agree on this.
The sea surface of equatorial Pacific Ocean has been warmer than normal (positive sea surface temperature anomaly), mostly since last year. But the present temperature anomalies are greater than that of previous year.

The image below shows various projections of the sea surface temperature (SST) anomalies in the Niño 3.4 region in the coming months. Niño 3.4 region lies between 120°W-170°W, 5°N-5°S and sea surface temperature anomalies for this region are mainly considered in ENSO forecasts. On the vertical axis, SST anomalies in degree celsius for this El Niño 3.4 region are represented and on the horizontal axis, groups of three months (for example, MJJ stands for May-June-July). Various curves indicate projections of various models (listed on the right side in the image), which are of two types—dynamical and statistical. Dynamical models are based on the usage of present weather conditions for forecasting. Statistical models give projections by applying statistics to past observations. Hence, dynamical models perform better than statistical models for ENSO forecasting.

As per the image, most of the models (both dynamical and statistical) are in agreement of warmer than normal SST in the Niño 3.4 region. Most of the curves tend to increase in the coming period, which means a possibility of strengthening of El Niño conditions. The average of dynamical models (shown as thick yellow coloured curve) shows that the SST anomalies in Niño 3.4 region would be between 1°C to 1.5°C in the coming period. That’s why such a high percentage of possibility of El Niño conditions has been forecast for the coming months. 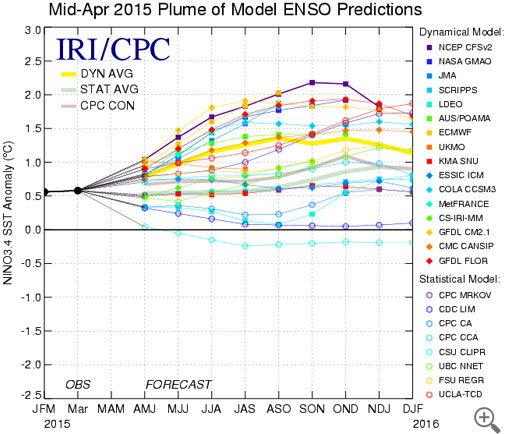 But there is catch, and it’s due to the ongoing spring season. At this time of the year, seasonal transitions take place (like summer to monsoon for India). Likewise, a transition in the phases of ENSO also takes place in the Pacific Ocean. The phases like El Niño/ La Niña peak during Northern Hemisphere’s winter season. During next year's spring season they are in transition. Suppose that we had an El Niño/ La Niña which peaked in the previous year’s winter, then at present El Niño/ La Niña conditions would be weakening in the Pacific Ocean. Even an El Niño might be under the development in this period and hence there is a huge uncertainty in what the models expect about the status of ENSO in the coming months. Technically, this spring period in which models have a tough time in making forecasts is referred to as “spring predictability barrier”. The discussion of CPC which has given a high percentage for El Niño conditions also mentions “there remains considerable uncertainty about how strong the El Niño event may become”. 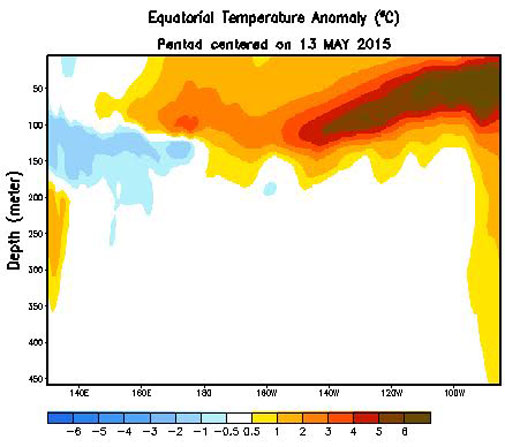 India’s summer monsoon season will be officially commencing from June 1, 2015.The Indian Ocean Dipole is anticipated to remain in the neutral stage as per Bureau of Meteorology, Australian, and this definitely wouldn’t be a good news for the monsoon. Also, it is certain that El Niño or El Niño like conditions will be present at least till the half of the monsoon season.

The above image shows the location and depth of warm water in the equatorial Pacific Ocean. Yellow/orange/red shades indicate warmer water and the depth scale is given on the vertical axis. It is clear that a large pool of warm water has spread till a depth of about 250-300m in the central Pacific Ocean. It is even deeper in the eastern equatorial Pacific Ocean (east of 100°W). So, even if we assume that in the coming months no fresh heating of the surface water takes place through direct ways, this pool of warm sub-surface water will in itself be sufficient to keep the surface water of Pacific Ocean warm in the months to come. This would keep the atmospheric circulation affected and hence the monsoon also would remain affected.

In a nutshell, as per the present scenario, a weaker than normal monsoon is expected in at least first half of the monsoon season. Rainfall situation wouldn’t be good in areas of Maharashtra like Marathwada.