The 2014 south west monsoon season is in its last lap, rather it’s counting its final hours in the north-western part of India. The official announcement of the retreat of monsoon from north-west India, especially Rajasthan, is likely to be made the by India Meteorological Department (IMD) this weekend or latest by Monday.

The withdrawal of the monsoon is considered after September 1 only, as per the guidelines set by IMD, and it brings a major transition in the weather of India. The withdrawal will be declared only when a few meteorological conditions are met.

If after September 1 rainfall activity ceases in an area for continuous five days in north-west India; there is an establishment of an anticyclone (high pressure region) in the atmosphere at about 5,000 ft above sea level and ground; and there is a considerable reduction in the moisture content in the atmosphere as inferred from the water vapour images (from satellites) and tephigrams (a diagram representing the temperature and energy state at various layers of atmosphere), then the first withdrawal of the monsoon is announced.

The above image shows daily mean rainfall in north-west India (which includes Uttar Pradesh, Uttarakhand, Jammu and Kashmir, Haryana-Chandigarh-Delhi, Punjab, Himachal Pradesh and Rajasthan) plotted on vertical Y axis and days on horizontal X axis. Red curve represents normal rainfall (calculated between years 1951-2000). One can see that the rainfall has substantially decreased from around September 13. Weather models indicate almost no rainfall in north-west India in the coming days. 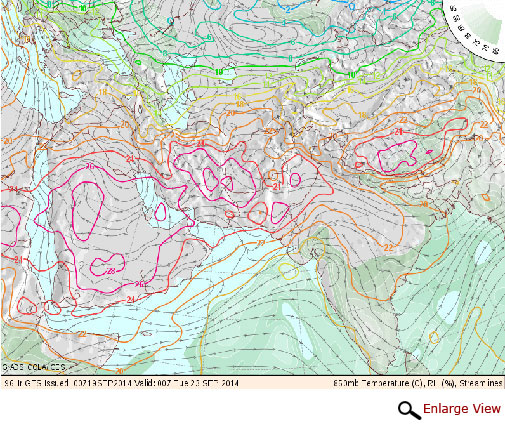 Above image shows the conditions at 850 millibars (or at about 5,000 ft above sea level) on September 22. Green shades indicate moisture (relative humidity at that level) as per the scale on top right of the image. Arrows indicate the winds at that level. The winds at this level will be blowing from Pakistan into India—from north-west to south-east. Usually, these winds are blowing from south-west during the monsoon season. Formation of an anti-cyclone at this level isn’t that clear as of now but the wind tendency does indicate its presence.

Such a reversal of winds, which the models indicate will continue for a longer period, indicates a transition in the season. 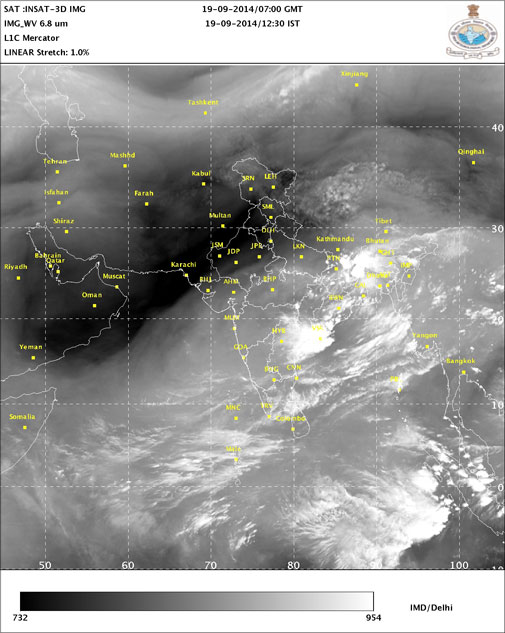 The Water Vapour image of India from INSAT 3D satellite  shows the water vapour content over India during the afternoon of Friday, September 19. Black/dark shade over Rajasthan, Delhi, Punjab and Haryana indicates almost dry air. Some moisture is still persisting in rest of India (areas from south of Jodhpur, Jaipur, Delhi), indicated by whitish patch.

Hence the conditions are almost in place for the withdrawal of the monsoon from western Rajasthan this weekend.

Monsoon’s withdrawal in the past four years 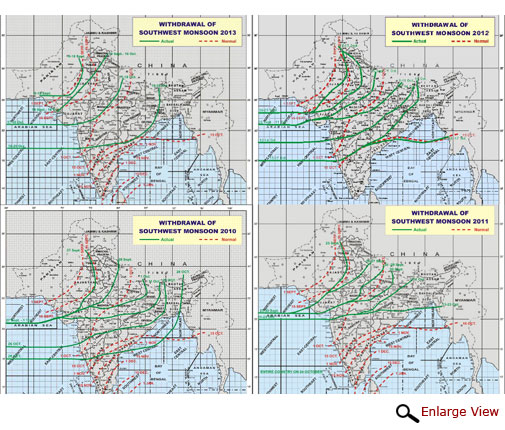 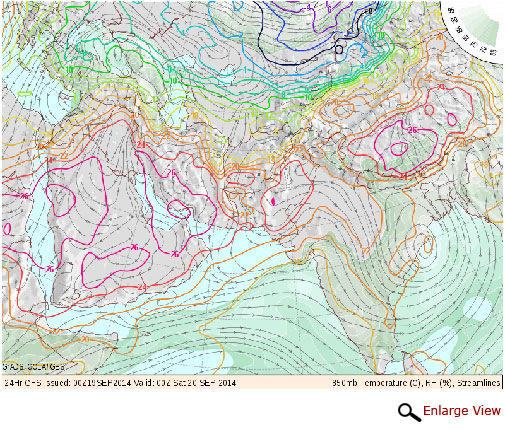 Apart from the winds coming from north-west direction, there is another feature. Anti-clockwise winds can be seen near eastern coast of India. This is a low pressure at 5,000 ft above sea level coming from Bay of Bengal. Due to this low pressure, heavy rains will be witnessed in Odisha on Saturday.

Under the influence of this low pressure, heavy rainfall will spread in Jharkhand and Bihar on Sunday and Monday. This may cause some localised flooding in these areas. However, the rivers in Bihar are flowing below the danger level, except the Bagmati river in Darbhanga district of Bihar. Heavy rains will also spread through foothills of Nepal in eastern part of the country on Monday. People in Bihar should monitor the river status here due to this heavy rainfall event.

Along with Bihar, heavy rains causing localised flooding will be likely in Assam (particularly western parts) and Meghalaya on Saturday. Heavy rains will also be witnessed in Sikkim and northern West Bengal on Sunday and Monday. This may pose landslide threat in Sikkim. From Tuesday, rainfall will be substantially decreasing in north-east India.

Southern parts of India will continue to get thundershowers. Good rainfall can be expected in southern interior Karnataka, Andhra Pradesh, Northern Kerala and Tamil Nadu from Tuesday. 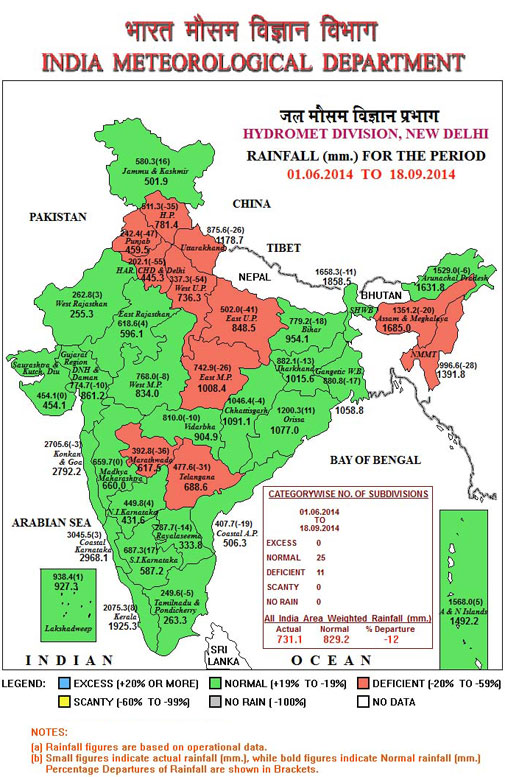 All India rainfall departure (from normal) from June 1 to September 18 has been -12 per cent. Twenty-five  out of 36 meteorological subdivisions are reporting normal rainfall, 11 are reporting deficient, whereas no subdivision is reporting excess or scanty rainfall.

Possibly, there will not be any signifiant change in this figure in the remaining days of the season till September 30.