September 30 this year will be an ordinary Tuesday for most people but it will be a special one for the southwest monsoon. Monsoon’s epic journey, which started around mid-May this year, will be coming to an end on September 30 as the season officially ends that day. All India rainfall during June 1 to September 4 is 14 per cent less than the normal rainfall. Believe me, it’s a pretty satisfactory number unlike what was being anticipated when the season commenced amidst an El Niño buzz. The El Niño which was supposed to shape rainfall pattern in these months didn’t turn up, but the monsoon which was supposed to fail in its performance performed very well.

Let’s have a look at the monsoon’s performance over the three months. 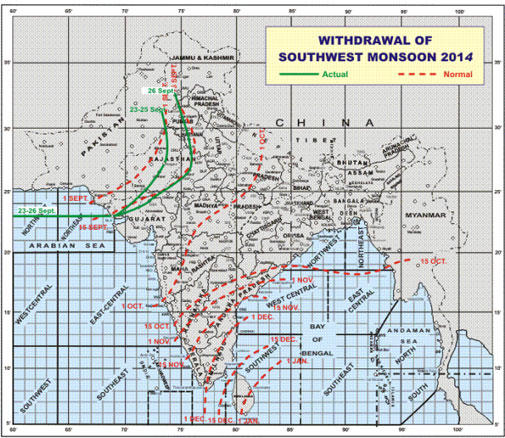 However, a low pressure region developed over Rajasthan that triggered thunderstorms and rains along much of north India that highly improved this situation. Jammu and Kashmir, due to heavy rains which created flooding in the western part of the state, plunged into the “normal rainfall” category from “deficient” along with western Rajasthan. Rains in Punjab also improved as the state entered the “deficient” category from the previous “scanty” category. Rainfall couldn’t improve the situation that much in Delhi-NCR region.

In my blog published in early August, titled "Monsoon data’s departure from reality", I had mentioned, “ideally, the southwest monsoon withdraws from Rajasthan and parts of Punjab by September 15, but there has been some delay in this process the past few years because of which monsoon withdraws completely from north India only by end of September. Due to this delay, the monsoon withdrawal is delayed in Rajasthan as well.”

Indeed, we see that happening now. Monsoon hasn’t withdrawn yet from Rajasthan and this means there is a delay in the monsoon withdrawal process in this year. So the monsoon has forgotten its timetable again.

This year for most of the places it didn’t arrive on time and now it isn’t leaving the nation on time.

From this weekend, there will be a significant reduction in the rainfall in north India and the maximum temperatures will jump back to 35°C and above. Long range weather models (predicting the weather for more than five days from now and which are not so reliable) are indicating a decrease in the moisture in north India at 850mb level (at 5,000 ft above ground) from around mid-September. IMD says: After September 1, monsoon withdrawal can happen from the western parts of Rajasthan or Punjab (Referred as extreme NorthWest India) if: 1) No rainfall is reported for at least five consecutive days in the region; 2) moisture content in the troposphere (lowermost part of troposphere where the weather systems exist) decreases; 3) a high pressure system is established between ground level to 5,000 ft above ground.

So, if the long range weather models are to be believed, monsoon withdrawal will likely begin around mid-September from western Rajasthan. It's too early to say when the southwest monsoon will completely withdraw from India.

A fresh low pressure from Bay of Bengal is expected to travel through southern parts of central India this weekend. This will bring heavy rains in Odisha and Chattisgarh on Saturday; and northern Telangana and northern Karnataka on Sunday. Vidarbha (southern Maharashtra) will be getting good rainfall along with Madhya Pradesh in this period. Heavy rains will be spreading into western, southern Maharashtra and western Madhya Pradesh on Monday. Eastern coastal areas of Gujarat like Surat and, possibly, Mumbai will get heavy rains around Tuesday-Wednesday; so, people in these areas should follow the weather. Excluding these areas, rainfall will be on a decline in rest of India.

As a result, the all India rainfall situation will further improve in India and the rainfall departure of India and central India division will come down.

Punjab will once again plunge into “scanty” rainfall category and don’t expect any further improvement in the rainfall in north India, including the subdivision Haryana-Chandigarh-Delhi. This subdivision is likely to end up as the region that received the worst rainfall in India this season.

*Note : The rainfall figures given in the blog were obtained on September 4 and they will vary with time. For the latest rainfall statistics, click here