Moody monsoon has given a perfect example that a diversity exists not only in food, religion and lifestyle in India but also in rainfall.

The past week saw a lot of swings in the monsoon’s mood in the east, north-east and north in India. As expected, numerous landslides happened in Nepal after August 13 because of heavy rains and this led to a surge in water levels of the rivers Karnali, West Rapti, Narayani, Bagmati and Kosi. Some of these were flowing above their respective danger levels. The rivers flowing in spate, like the Rapti, have severely impacted about 1,500 villages of Uttar Pradesh and has affected at least 600,000 hectares of land as per news reports.

Bihar is witnessing the worst. Nearly 500,000 people have been affected by the floods as many breaches were reported in the embankments of the rivers Kamla Balan and Gandak, which affected Bihar’s Darbhanga, West Champaran and Nalanda districts. The havoc unleashed by rainfall and flooding has spread even in Assam; after the heavy rainfall from August 13 to 16, the river Brahmaputra swelled and overflowed, inundating 80 per cent of the famous Kaziranga National Park.

As the rainfall has reduced in Nepal, the water level in the rivers have also reduced and, as of now, no river is flowing above the danger or the warning level in Nepal. However, as per the update  by the Flood Management Information System (FMIS) of Bihar, the rivers Bagmati, Kamla, Kosi and Mahananda continue to flow above the danger level as of the evening of August 18. As no fresh heavy rains are expected in Nepal or Bihar this week, the flood water will be slowly receding in Bihar but it will take time given the present status of the rivers.

In the period between June 1 and August 18, Punjab and Haryana-Chandigarh-Delhi subdivisions have recorded a strong rainfall departure of -60 per cent, which have placed them in “scanty rainfall zone”. Blame the monsoon and IMD for this—monsoon, because it hasn’t actively turned up since many days, and IMD, for unnecessarily putting Delhi in the scanty rainfall zone. Let's see why I say so.

Since June 1, till the morning of August 18, Delhi’s Safdarjung observatory has recorded a rainfall departure of -38 per cent and Palam observatory recorded a departure of -40 per cent. Ideally, this should place Delhi in the “deficient rainfall” category (see the range below) but thanks to the widespread scanty and deficient rainfall in Haryana and Chandigarh, Delhi has earned a bad name for a poor monsoon show. The image below via IMD shows lots of yellow (scanty rainfall regions) and reddish (deficient rainfall regions) in Haryana for the period June 1 to August 16. Rainfall departure in Chandigarh is about -61 per cent at the moment. 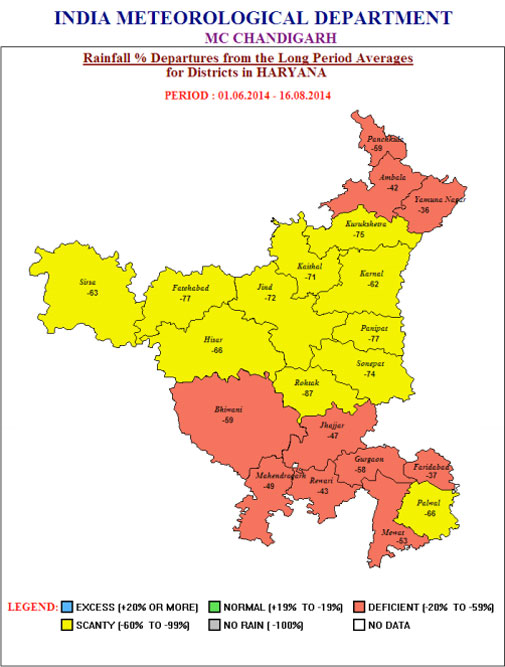 Hence, Delhi is far from reaching the scanty rainfall category but still it's jointly coming under it due to IMD’s rules which make no sense in such a case. Delhi must be evaluated independent of Haryana and Chandigarh. 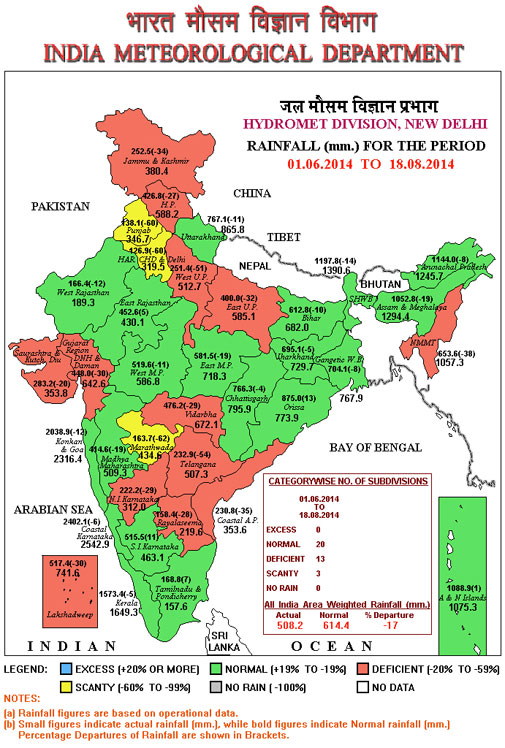 Monsoon data’s departure from reality  is even more clear now. During the period June 1 to August 6, the all India rainfall departure was -18 per cent whereas for the period June1 to August 18, it is -17 per cent. This indicates an improvement in All India rainfall by 1 per cent and as per IMD, the rainfall is in the “normal” category. Let's have a look at how “normal” the rainfall is and how much it has improved. The table below itself speaks. 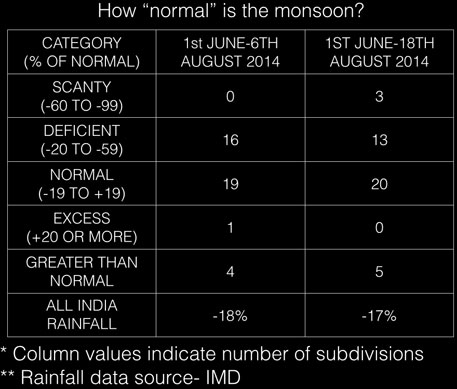 This is how statistics are misleading and the methodology is bluffing when they speak about the rainfall of India as a whole. There is a strong need to replace this IMD definition of “normal rainfall” and increase the number of subdivisions for better monitoring of the rainfall in India.

The weather this week in India

No good news for north India to begin with. The dry winds (blowing between surface and till at least 20,000 ft above ground) in north India are expected to blow from north-west, from Pakistan, and this will keep the monsoon winds away, leading to dry and hot weather. Maximum temperatures are once likely going to shoot up in north India plains like Delhi NCR, Punjab, Haryana, Chandigarh and they should be settling close to 38-40°C, mostly. The situation will be same in Rajasthan also. Gujarat will also get dry weather this week with maximum temperatures rising.

Rainfall will disappear from the hilly areas like Uttarakhand and Himachal Pradesh. Such a wind pattern and rainfall disappearance often hints towards the monsoon withdrawal  but it will be too early to comment on it. Nevertheless, north India has less than a month of monsoon season remaining. 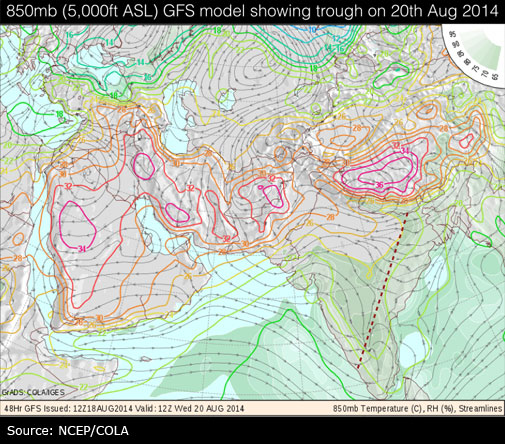 The above image is of a Global Forecast System (GFS) weather model showing the atmospheric conditions at about 5,000 ft above the ground over India. Green shade represents the relative humidity or RH (more green means more RH) at that layer. One can clearly see the winds over north India which are coming from Pakistan and the absence of green colour over north India is hinting at dry and hot weather.

The red line (dashes) in the image represents the axis of trough  (or elongated low pressure region) at that level. Weather forecasters are in search of such troughs as they destabilise the atmosphere due to which thunderstorm/rainfall chance increases. A trough is expected to form at this level which will bring thunderstorms in central India from Wednesday (although thunderstorms are expected on Tuesday also). Widely scattered thunderstorms will also be a common feature in eastern India like the areas near the red line. This mostly includes Jharkhand, Chattisgarh, some parts of West Bengal, eastern Madhya Pradesh, eastern Maharashtra and Odisha. As thunderstorms would form during the noon hours, maximum temperatures is likely to stay high here due to the morning sunshine.

From Wednesday till Saturday (August 20 to 23) this trough will bring good rainfall to the interiors of Maharashtra (southern parts), Karnataka, Telangana and Kerala. This rainfall will be a kind of boon to Marathwada which is experiencing water crisis. It's also possible that the rainfall will turn heavy in Kerala this weekend.

*Note : The rainfall figures given in the blog were obtained on August 18 and they will vary with time. For the latest rainfall statistics, click here