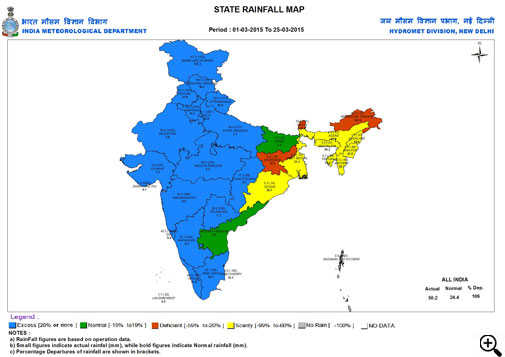 In India, the summer season is so intense that not many people welcome it. However, it might be for the first time that this unpleasant season has the making of turning pleasant, especially if one compares it with the severe weather rounds that lasted for half of March. India has reported a strong 106 per cent departure (from normal) rainfall between March 1 and March 25, which has damaged crops on over 10.67 million hectares, as per the agriculture ministry. Blue in the above image shows excess rainfall states and it’s clear that excluding east and Northeast, rest of India got excess rainfall in this period. Strong rainfall departures (greater than normal) have been recorded in Rajasthan, Daman-Diu and Goa.

As was expected, the disturbances from west ceased after mid-March, giving way to the heat. Maximum temperatures at many places in India, particularly in Gujarat and Maharashtra, are in the 40°C range now. After witnessing many cold days, plains in north India are now finally reporting warm days. But the calm weather is not going to continue for long as the “western disturbances” are anticipated to bid farewell to March and welcome April.

The Global Forecast System (GFS) weather model shows the movement of another upper air trough and “western disturbance” in India from Sunday, March 29. People might get a sense of déjà vu on reading the two terms “upper air trough” and “western disturbance”. But the intensity of the upcoming weather events is going to be very less as compared to the past events that rained troubles 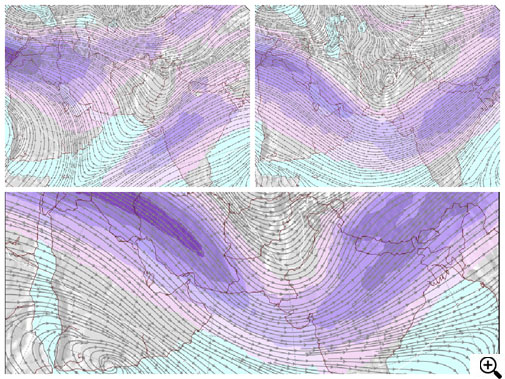 Shown above is a comparison of upper air conditions, say at an altitude of around 10,000 metre above ground, during three periods—March 29; March13 that produced the mid-March rainfall event; and March 1 that produced the early-March rainfall event. The arrows in the images represent the flow of subtropical jet streams (west to east) and shades represent their wind speed. Areas of stronger (more purple) shades represent jet streaks regions where the wind speed is greater. Appearance wise, the more the ‘U’ shape of these winds, the higher is the intensity of troughs observed. More intense trough means more severe weather. The ‘U’ shape appears more pronounced over north-west India/ Pakistan in the bottom image (during early-March rainfall event) when compared to the two images above. This is why the early-March rainfall event will be the strongest amongst the mid-March events and the upcoming event. 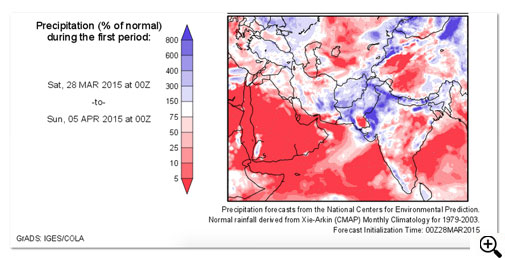 Wet March-end
From Saturday (March 28) night, rainfall and snowfall (at higher reaches) due to the approaching system will commence in western Jammu and Kashmir. Rains expected in Srinagar. Moderate snowfall and rainfall is expected on Sunday in Himachal Pradesh along with western Jammu and Kashmir. Later on Sunday, severe thunderstorms are expected around Punjab, Haryana, western Rajasthan which would be bringing rains (possibly some hails). Other areas such as Delhi-NCR will also get rains. Apart from this, western Madhya Pradesh and south-eastern Gujarat will also get thundershowers. Light rains possible in northern Maharashtra and some parts of West Bengal.

Rains will be spreading eastwards on Monday. Light rains expected in north India plains (excluding most of Rajasthan), most of Maharashtra, some parts of Chattisgarh, Madhya Pradesh, Odisha and northern Andhra Pradesh. Heavy rains likely in Sikkim, Meghalaya, Assam.

This rainfall event will keep a lid on the maximum temperatures to some extent but will not be able to give much relief from the ongoing heat.

Weather will clear up for a while in north India from Tuesday. It will completely normalise for rest of India.

Wet beginning to April
It’s going to be a double treat for north India. Another and perhaps a stronger western disturbance is approaching towards India but its impact will be experienced only in north India. The plains will get rains from around April 2, which will continue in periods till around April 5. In this period, heavy snowfall will also be experienced in higher reaches of J&K and Himachal Pradesh.

As per the present estimates from weather models, this system may cool down north India slightly but it is too early to believe the models. Hence, people in north India must follow weather updates.