Bhubaneswar Bindhani has not heard of a UNDP Human Development Report Paper, ‘Migration and Human Development’. It is quite likely the authors of the 2009 report did not take note of the fortunes of this resident of Nuagaon village in Odisha’s Nuapada district when they wrote, “migration fosters development of the migrant people.” They also perhaps did not take note of many other people from Odisha’s western districts who migrate every year to work in sub-human conditions at brick kilns and construction sites in Andhra Pradesh, Tamil Nadu and Karnataka.

In 2010, eight members of Bindhani’s family sought work in different parts of Andhra Pradesh to return a loan of Rs 27,000. Non-profit ActionAid’s statistics show 200,000 people migrated from the western districts of Odisha to work in the brick kilns of Andhra Pradesh. Data compiled by another non-profit, Migration Information and Resource Centre (MIRC), shows 150,000 people migrated from Balangir district in 2009-2010. According to this non-profit, most migrants are landless or small or marginal farmers, and belong to the Scheduled Tribe and Scheduled Caste communities.

The condition of the migrant workers of this area is well encapsulated by the Inter-state Migrant Workmen’s (Regulation of Employment and Conditions of Services) Act, 1979. The Act’s preamble reads, “At the time of recruitment, sardars or khatadars promise that wages calculated in piece-rate basis would be settled every month, but usually this promise is never kept. Once the worker comes under the clutches of a contractor, he takes him to a far-off place on payment of railway fare. No working hours are fixed for these workers.”

Miriki Tandi of Balangir district, who worked at a brick kiln in Andhra Pradesh’s Nalgonda district, told this writer that brick kiln workers labour for 18 hours a day throughout the season (October/November to May/June) for a weekly allowance of Rs 300. A typical labour unit constitutes two adult members and a child. This unit is supposed to make 150,000 to 200,000 bricks in seven months. The families usually eat broken rice (chicken fodder) with dal and sometimes a little curry. “A good meal at a brick kiln is a dream for us,” lamented Tandi.

An MIRC study notes that more than 80 per cent of migrant children work with their parents. The study also notes that 10 per cent of the total migrants are in the age group of 6-14, who lose education for seven months in a year. It points out that 49 per cent of such children go to schools when they are not labouring in other states; the rest are either dropouts or never enrolled in the school due to uninterrupted migration. In the destination areas only a handful of children get education in schools run by NGOs.

Very often, the workers are tortured by employers. In April 2010, newspapers in Odisha reported the death of a migrant worker from Balangir, Rupadhar Bariha. Kept as a bonded labourer along with his family at a brick kiln in Nalgonda district, Bariha was beaten to death by kiln owner Jagan Seth. Last year, the Balangir administration had to rescue people from the district working as bonded labourers in brick kilns in Andhra Pradesh’s Ranga Reddy district. Most brick kilns in Tamil Nadu, Andhra Pradesh as well as in parts of Odisha are not registered under company laws and are rarely monitored by labour departments.

The Mahatma Gandhi National Rural Employment Guarantee Scheme could have helped the migrants. But the scheme has not really worked well in Odisha. In Balangir, for example, 61,000 of the 245,000 job card holders were covered under the scheme in 2009-2010. These job card holders have got an average of 43 days of employment, as per official figures. In Nuapada district only 18 per cent of the job cards (108,000) got an average of 27 days of employment in 2009-2010.

The author is a freelance journalist based in Bhubaneswar. He can be contacted at 2006pradeep@gmail.com 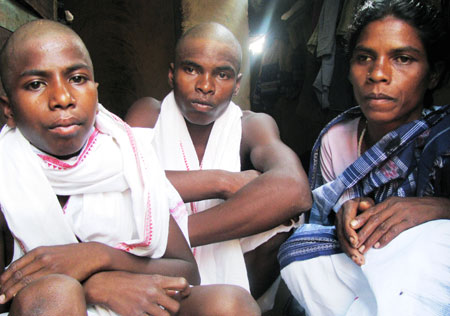