Mucking around the Taj

Is there any point in keeping an architectural beauty radiant while the rest of the city goes to pot? 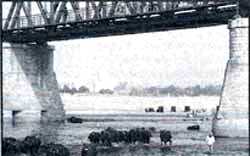 THE 12 million-plus population in the one-time Mughal capital of Agra is rather bemused by the brouhaha over the decay of the Taj Mahal. Naturally, while the city in which they live is choked with smog and its streets littered with filth, the preservation of natural heritage is the last thing on their minds. Besides, the considerable contributions made in the last 47 years by the tourist capital of the country to the national exchequer's kitty have hardly been pumped back into the city.

In a city where administrative presence evaporated many years ago, civic amenities virtually do not exist. Water- and air-borne diseases, as well as lung ailments due to the city's foul air, claim scores of lives every year. Unemployment is rampant. The crime graph inches farther up every year.

The population has almost doubled over the past 10 years; settlements have mushroomed in every nook and cranny; officials admit that almost 50 per cent of the city's dwellings are unauthorised, and that the number of planned colonies can be counted on 2 fingers. The mantra for the civic bodies is angled at keeping the Taj groomed and glowing and satisfying VVIPs. For a city of over a million people, there are only 7 trucks that lift garbage off the stinking streets. Barring the colonies that have come up over the past 5 years, all others are without any kind of sewage disposal system.

The last time sewer lines were laid was in 13 colonies in 1977, financed by the World Bank. But the flash floods in 1978 in the river Yamuna choked both feeder and trunk lines. After dragging their feet for years, municipal engineers found a ready solution: they disconnected the trunk lines and connected them to scores of open drains. The city reverted to its old and leaky drainage system which is now spilling over.

These drains offload untreated waste from the city's residential areas, the hundreds of tanneries, and other industrial units lining the Yamuna. At almost any time of day, noxious fumes can be seen writhing up from these drains. Forty-three open drains vomit into the river all along its 7 kilometre run through the city. The problem is compounded by the fact that the river already carries hundred of tonnes of effluents regurgitated by nearby Delhi. Such is its trauma that the city that attracts tourists and dollars by their thousands now awaits a Rs 5 crore World Bank largesse for clearing and repairing the sewer system. Plans for a waterhead and water treatment plant are trapped in a web of vested interests.

Little has been done to improve the supply of electricity. In the fierce summers, when demand peaks, thousands of noisy diesel generators add to the pollution level, neutralising the substantial benefits of closing the city's only power station in 1977. A majority of the population has no access to efficient fuels or cooking methods, and choolahs using firewood add to the daily smog.

The city's foundries have been belligerently blamed for the high pollution levels and their chip-and-destroy effect on Taj over the past decade. But little has been done to understand why the number of foundries and tanneries grew so vertiginously. After Independence, the major sources of livelihood were carpets and handicraft. Through the first 4- and 5-year-plans, industrialisation and its consequent mayhem was encouraged. The carpet and handicrafts industry, faced with dipping revenues, lost ground to brazenly polluting tanneries and foundries, which emerged as employment havens. Lured by the glitter of a tourism-oriented industry, thousands of families turned away from their traditional professions.

The closure of tanneries and foundries has achieved little as far as saving the Taj is concerned; over the past 3 years, a 100,000-odd labour force has been laid off without a source of livelihood; the number of vehicles shot gone up by 400 per cent during the past 10 years; the frenetic National Highway 2 that runsg through Agra carries over 30,000 vehicles each day; there is just one pollution-level testing unit in the city; a high-powered government thinktank has failed to come up with ideas about creating a public transport system which is less-polluting than the noisy Vikrams 3-wheelers that rocket down the narrow streets.

Oldtimers strongly feel that nothing can save the Taj if the indifference towards the city's socioeconomic cul-de-sac continues. The "conservation of the heritage" is being attempted at the cost of the people, ignoring the fact that the Taj has no business bleeding the city.