National Air Quality Index: A solution with too many problems

Due to lack of monitoring and maintenance, most of the authorized centres have failed to record real-time data on air pollution

Due to lack of monitoring and maintenance, most of the authorized centres have failed to record real-time data on air pollution

On April 6, 2015, India had launched its first ever National Air Quality Index (NAQI) and acknowledged the problem of its incessantly rising air pollution. This index was launched by Prime Minister Narendra Modi in New Delhi, starting with 10 cities inthe first phase. The cities include Delhi, Agra, Kanpur, Faridabad, Lucknow, Varanasi, Ahmedabad, Chennai, Bangalore and Hyderabad. While this was definitely a good move, we still need answers on how to tackle the bigger problem of our deteriorating air quality and protecting the health of citizens from its ill effects.

How the index works
NAQI is tool that uses numbersto simplify air quality data by classifying pollution levels into 6 categories—good, satisfactory, moderate, poor, very poor and severe—and denotes a color code on the basis of how harmful the pollution in a specific area is. Each of the pollutants—PM2.5, PM10, NO2, CO and Ozone—are assigned an air quality index (AQI) and thereafter an overall AQI is given daily indicating the value of the worst pollutant value for that area. This makes it easier for people to know how bad the pollution in their area is and which places they should avoid on that day. It is certain that awareness will go up with availability of a monitoring tool like this.

But what is missing is that no one knows the next step. The government has not at all talked about an aggressive action plan that can tell people what precautionary actions to take based on pollution levels and how to combat the bigger problem of air pollution. 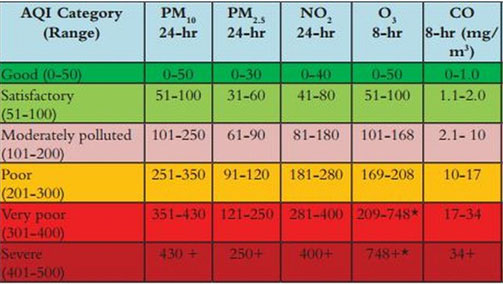 Full of flaws
For this AQI to function efficiently, the monitoring stations in the designated areas need to function properly. While there were many expectations from this AQI, it has already started to show glitches that exist due to improper maintenance. For instance, in Delhi, the pollution control committee has six stations—one each at RK Puram, Punjabi Bagh, Civil Lines, Mandir Marg, AnandVihar and Indira Gandhi International Airport. The Central Pollution Control Board (CPCB) has some other stations in Dwarka, ITO, Delhi College of Engineering and a few other areas. But it is shocking to see the data that stations across India are showing just days after the launch of NAQI.

We could accept a minor glitch if this was limited to one station. But the list just goes on. 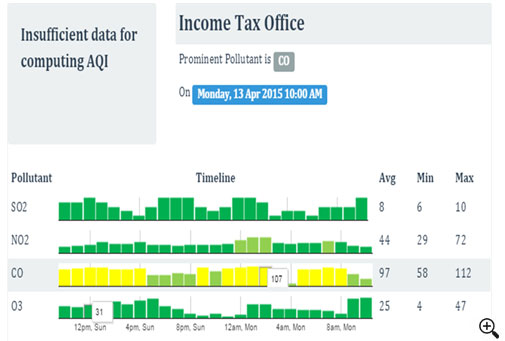 Moreover, some of the stations are also showing data that is three or four days older than the current date. How would the implementation of air quality index succeed if the monitoring stations that should project real time air quality data stop functioning properly? On April 15, 2015, Hindustan Times had reported that out of 28 locations, over half the locations showed “insufficient data for AQI”. Meanwhile, in absence of sufficient monitoring stations, a few cities are being forced to rely on a single monitoring station.

AQI covers limited areas
Last week, I received a query from my friend who stays in Mumbai. He complained to me about the rising discomfort that he faces in breathing lately. He also wanted to access the AQI for Mumbai, especially the area where he stays. Unfortunately, I had to tell him that the AQI programme does not cover Mumbai at present. However, the consulate general for USA measures PM2.5 around the embassy and converts it into an AQI that is calculated over a period of 24hours. This is what it showed on April 15 and 16, 2015.

As per the Indian AQI, these values, on a prolonged exposure, would mean poor air quality and breathing discomfort for people. However, this only covers the Bandra region of Mumbai and is not available for the rest of the city.

In the Hindustan Times article, environmentalist Sumaira Abdulali had said, “There seems to be an absolute inadequacy of data on a real time basis. For a resident who lives on the outskirts of a city, one figure for a particular region does not denote the level of air pollution for the whole city. General index figures are not saying much, until a detailed analysis is shared”.

Experts in Mumbai also believe that air pollution in the city will reduce the life expectancy of its citizens. As per Philip Earis, a scientist and resident of Bandra, an average Mumbai resident is at a risk of losing three years of his life solely due to air pollution. But the sad part is that people are not aware of the severity of the situation, thus leading to lack of thrust in bringing the change.

What could the way forward be?
There is a need to expand AQI and include most of the cities in the list of the air quality index programme so that the citizens all over the country know about the pollution levels in their areas. They should also be aware of the steps they can take to protect themselves.

Globally, the air quality index feature fares very well, along with a health advisory that is issued to public, based on the severity of pollution. But for India which is still struggling to get its data right, this would be a far cry. So, it is to be seen what could be the solution to a problem that was implemented as a solution.