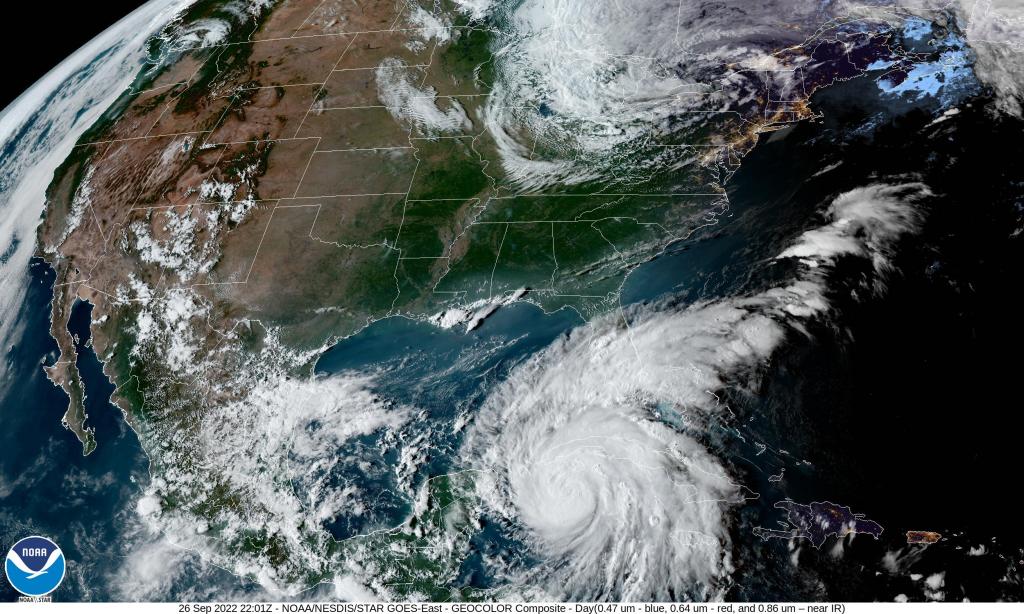 Hurricane Ian gained strength as it headed over warm waters off Cuba on September 26, 2022. Photo: NOAA

Hurricane Ian strengthened as it headed for Florida and was on track to bring a powerful storm surge and flooding rainfall to large parts of the state this week. National Hurricane Center Acting Director Jamie Rhome told CNN that if the storm slowed significantly near Tampa, under the current forecast, it could be “a near worst case” scenario for the region. Several areas were under evacuation orders.

After a slow start to the 2022 Atlantic hurricane season, Ian formed in ideal conditions, with minimal vertical wind shear, which can tear apart a storm, and warm ocean surface waters providing fuel.

Forecasters expect Ian to become a major hurricane — Category 3 or higher on the Saffir-Simpson Hurricane Wind Scale, meaning winds over 110 mph — before crossing western Cuba on Tuesday. Its winds could weaken before landfall in the U.S., but the scale doesn’t take water risk into account, and flooding and storm surge are both major risks from Ian.

As a meteorologist living in Florida, I study tropical storms and hurricanes. Here are three reasons Florida’s Gulf Coast is facing a high risk of water hazards this week.

The rainy side of the storm

Tropical systems are not perfectly symmetrical systems — one side is typically larger. With Ian tracking up the west coast of Florida, the peninsula is expected to be on the “wet” side of the storm. The part of the storm east of the center of circulation generally has more cloud cover and more rain.

The most dangerous side of the storm is its upper right quadrant.

While Ian travels up the Florida coast, these outer bands will stretch over much of the peninsula and produce heavy rain for many locations, beginning as early as Monday night for South Florida and late Wednesday for northern parts of the state.

Some weather models are forecasting 10 inches or more of rain in the region where the storm makes landfall, possibly as high as 15 inches, while other regions could see 4 inches or more.

Regardless of the landfall location, most of the Florida Peninsula will see effects from Hurricane Ian.

As Hurricane Ian continues to track north, it will be pushing the waters of the Gulf of Mexico northward with it. This is storm surge, and it raises the water level, with waves on top adding to its destructive power.

Additionally, the storm’s strong winds will push the water in the same direction the storm is heading. Since land surrounds the Gulf of Mexico, there is nowhere for this water to go but inland.

Locations along the western Gulf Coast could see storm surge heights between 4 and 10 feet, depending on just how close Ian tracks to the coastline. The Tampa area forecast as of Sept. 26, 2022, was for 10 feet of storm surge that could be pushed into Tampa Bay. Up to 3 feet of storm surge is expected for the Florida Keys and South Florida, but these amounts could also be higher, especially as Ian strengthens into a major hurricane.

Due to Ian’s northward track, portions of the Big Bend and the Panhandle can expect to see some storm surge and coastal flooding, especially as the storm nears land, as well as areas along the coast. The Tampa Bay area in particular should be monitoring Ian closely, especially if the center of circulation makes a direct impact or if it remains just offshore.

Mandatory evacuation orders were already in effect Monday for parts of Hillsborough, Pinellas and Manatee counties, and Hernando County had a voluntary evacuation order. Residents were encouraged to check their evacuation zones and identify the closest shelters before the storm arrives.

Another factor to watch is Ian’s size. Size plays a key role in a hurricane’s impact.

A large hurricane, like Irma in 2017, will have more cloud cover and therefore more rain. Storm surge will reach a larger area with larger storms. If the storm is large enough, it could even generate storm surge on the eastern side of the Florida Peninsula, like Irma did along portions of northeast Florida.

A smaller storm, like Hurricane Andrew in 1992, is more of a wind storm and the impacts are in a smaller area. But as Florida saw with Andrew, wind damage can be catastrophic in these smaller systems.

It’s too early to tell how large Ian will get, but the storm is expected to intensify over the Gulf of Mexico. Residents across Florida need to prepare for the risk of heavy rain, flash flooding, storm surge, isolated tornadoes and strong winds.

This article was updated with evacuation orders issued and National Hurricane Center comments about risks to the Tampa Bay area.