India’s urban floods: Why we need to look at nature-based solutions

Solutions to reduce the loss of lives and livelihoods from urban floods; Can be exercised by individuals and local govts 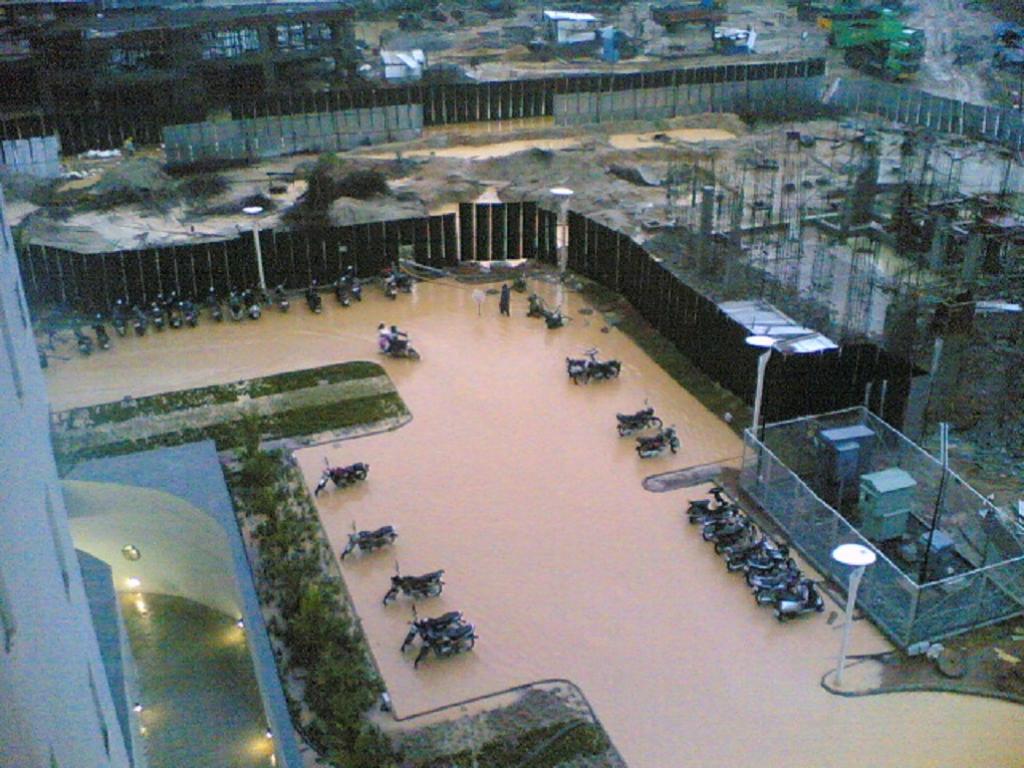 Extensive and recurring waterlogging and floods disrupt life in Indian cities almost every monsoon. At other times, sudden but high-intensity cloudbursts generate substantial run-off from the city’s concrete surfaces that inundate low-lying locales.

To combat such occurrences, to date, cities have mostly relied on traditional approaches of flood management termed ‘Grey Infrastructure’. These often get overwhelmed during heavy downpours due to the reduced capacity of installed pipelines, flood storage, drawbacks in the operation of pumping stations and a general lack of maintenance.

These nature-based solutions are socio-ecologically sound to reduce the loss of lives and livelihoods from urban floods. These measures can be exercised at both ends of the system, from individuals in households to local government bodies.

Though such practices do not have a universally accepted definition, they usually include setting up components like urban forests, terraces and slopes, open green spaces and corridors.

Some other components are urban farming and bio-retention areas, natural or constructed inland wetlands, river and floodplain restoration, riparian buffer formation or rejuvenating and installing mangroves and salt marshes, based on space availability and the nature of the ambient topography, city site and size and its socio-economic profile.

However, some questions that often come to the fore are whether NBS actually works and does it really have viable benefits over grey infrastructure. These queries are examined from a few bases. 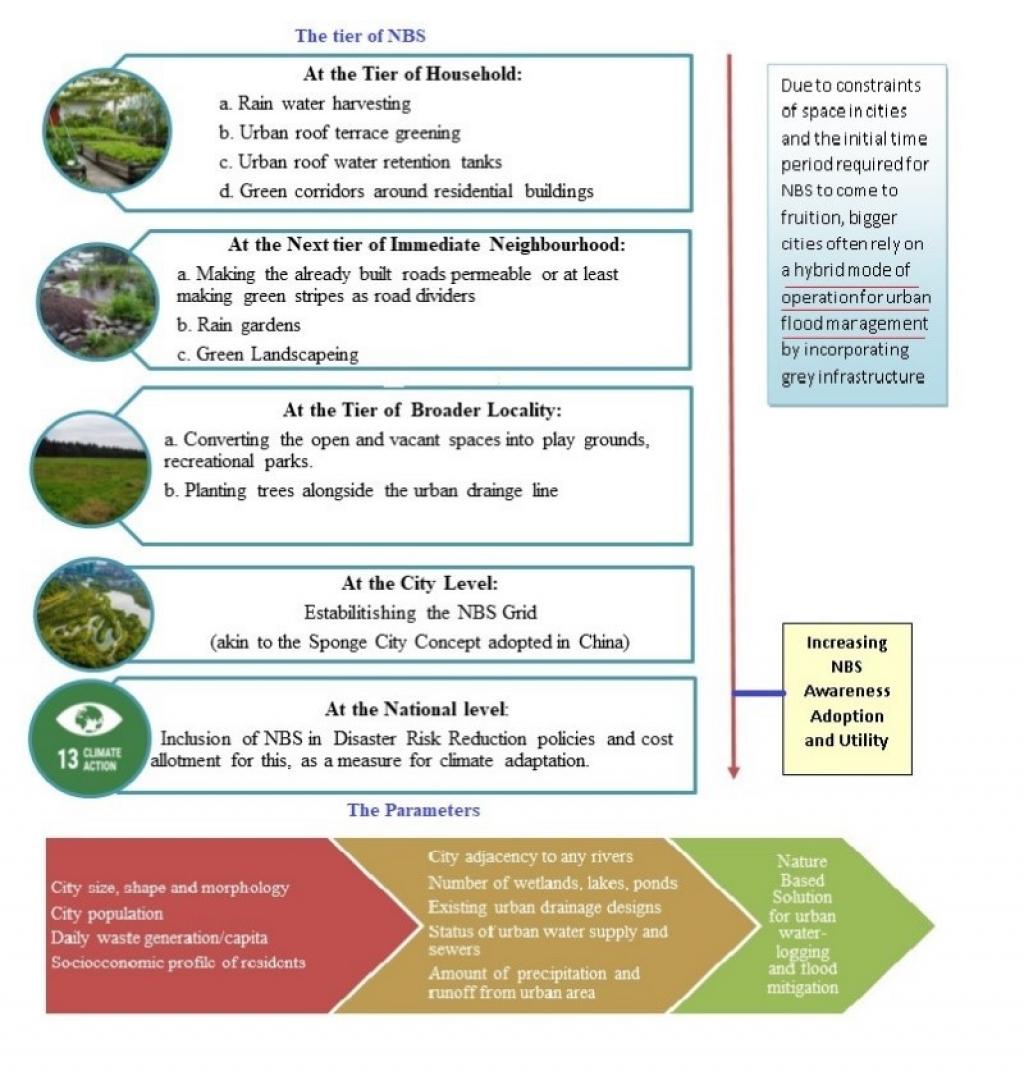 In India, unrestricted and haphazard urban sprawl has been a dominant phenomenon in cities of Jammu and Kashmir, Rajasthan, Gujarat, Maharashtra, Chhattisgarh, Karnataka, Tamil Nadu, West Bengal and Assam.

These cities often expand without considering how many waterbodies are lost within the city boundary and along the peri-urban zone, thus exacerbating future urban flooding issues.

However, some adoptions of the NBS approach have been formulated across the country by involving local communities in different Tier-I, II and III cities, which are listed below: 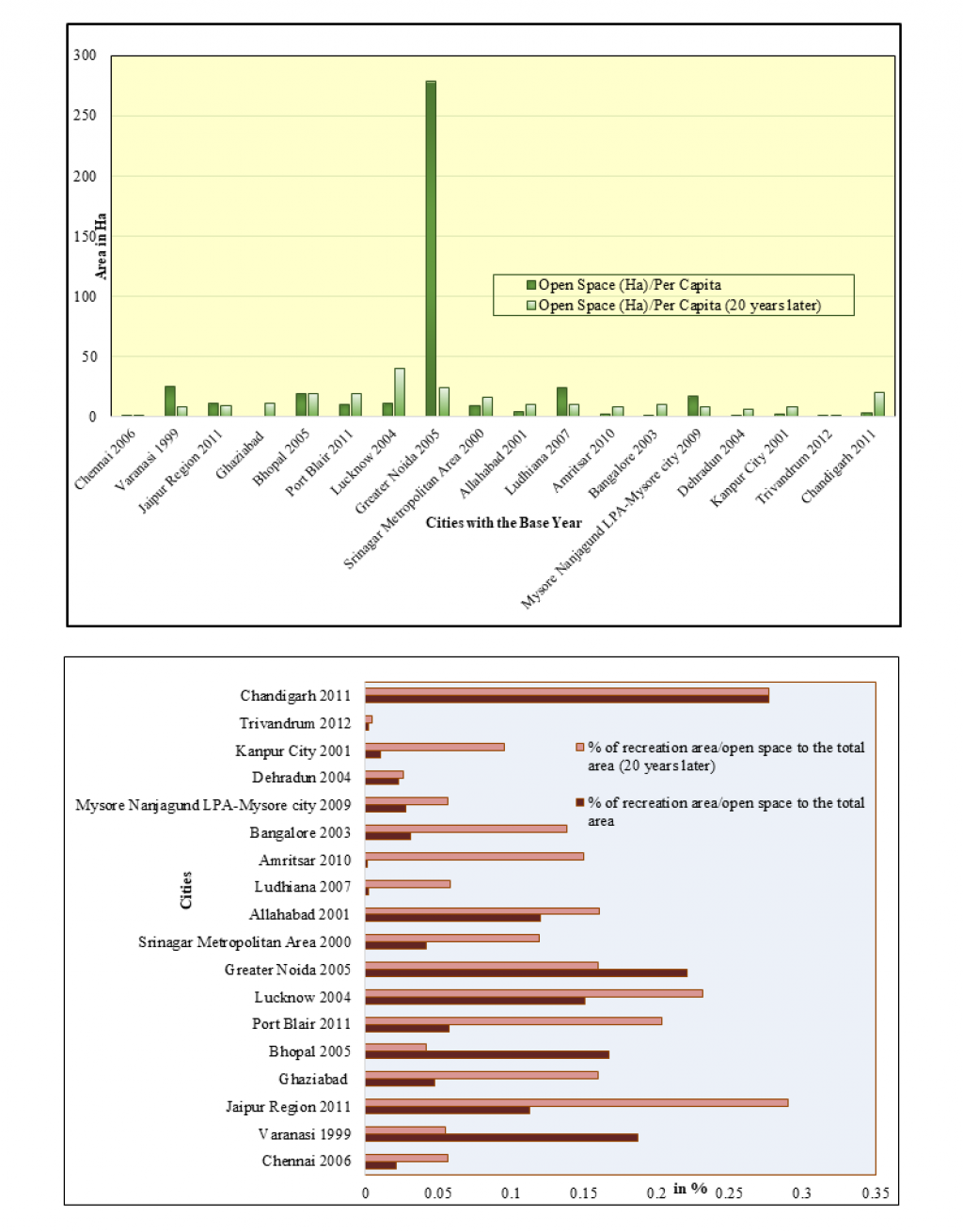 States like Jammu and Kashmir have opted for eco-restoration policies to fight against climate change. Guwahati has emphasised the importance of open spaces within built-up areas, preservation of watersheds and wetlands, reconnecting the floodplains and afforestation.

The continued urban growth of Kolkata has seriously threatened its biggest carbon sinks and natural water retention and drainage zones, the East Kolkata Wetlands and the Rabindra Sarovar.

Many a project funded by the United Nations and the Asian Development Bank, in collaboration with the Kolkata Metropolitan Development Authority, has focused on urban greening, maintaining open spaces and preservation of wetland and waterbodies.

Yet much more remains to be done, given the continued sprawl of the city, the emergence of newer urban centres adjacent to it and the sustained transformation of wetlands to built tracts.

A long way to go

India’s disaster risk reduction policies have usually considered natural assets. However, issues like equal stakeholder participation and shared responsibility among policy shareholders are myths, even where NBS solutions are being implemented.

Miscoordination at various level of planning have often stymied the efficacy and economic viability of NSBs, with more immediate (and high cost) structural measures being pushed through instead of favouring a longer-term, ecologically friendly, community-based cost-effective approach, in combination with already existing built measures.

However, India’s urban population is expected to reach 814 million by 2050, with the addition of four new megacities by 2030. So, there is an urgent need to recognise and advocate the adoption of NBS to mitigate urban flooding and include them as crucial components of city master plans and urban renewal schemes.

The major focus areas of such an NSB-based urban flood mitigation plan would be:

Nature Based Solutions may not provide immediate benefits but are garnered towards yielding greater long-term sustainable advantages in combating fallouts from the ongoing climate crisis.

The inclusion of NBS in disaster and risk reduction policy frameworks has yet to occur substantially in India, even though there are a few missions and action plans that are explicitly comprised of some facets of eco-based resilience.

Intended Nationally Determined Contributions presented by India to the United Nations Framework Convention on Climate Change in 2015 for lowering the nation’s GHG emissions is one more such example.

The central government in India has also launched urban development-specific schemes wherein stormwater drain management and encroachments are addressed. Examples of some of them are the Atal Mission for Rejuvenation and Urban Transformation, Smart Cities Mission and the Swachh Bharat Mission.

On the other hand, corporate houses have also already shown interest in the carbon-offset sector, with promising and increasing investments. NGOs like India Climate Collaborative and the Center for Science and Environment are engaged in creating greater awareness of NBS issues and mobilising plans and resources for their implementation.