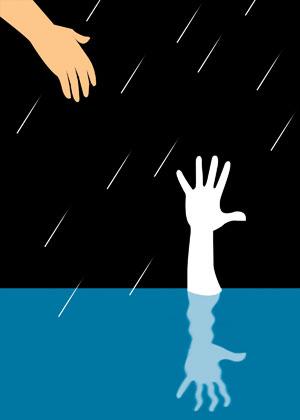 Bihar chief minister, Nitish Kumar, whose state is submerged under water reportedly told the prime minister that he wants to cry. We should add our tears to his. This year’s floods not only have the imprint of our gross and near criminal mismanagement, but also mark the beginning of the world risked because of climate change. This should worry us. In fact, scare us. We need to realise that we do not have the luxury of delayed action and petty party politics. In this climate-risked world, where we are hit by a double whammy, we need to ensure that not only do we get development right, but we also need to do this at a scale and speed we have never done before.

The 2016 floods are huge in its scale—virtually all parts of the country have been hit by devastation. And remember, it is not just about some water that enters homes. Floods claim lives, destroy property and crops. In this way, all the years of developmental efforts are lost in one stroke. It is also clear that we worry about floods only when it affects the urban population. Even during the deadly 2013 Uttarakhand floods, the tragedy reached our television screens only because of the large numbers of people who died or were trapped in the swirling waters. Floods do not, otherwise, get serious media coverage. We do not know how bad the situation is or how it is getting worse. Floods then have become part of the cycle of boredom; they will come every year. So, what is new?

In this issue of Down To Earth, my colleagues have carefully investigated this “newness” in floods. So, on the one hand, floods are destroying vast parts of the country because of how we have mismanaged our floodplains—willfully allowing encroachments on riverbeds, drains and storage lakes. Then we have built embankments and dams for flood protection that are making things worse. This is because by building embankments—walls to hold river water from spilling—the silt accumulates and raises the riverbed. Today when the river has water, it spreads over land, causing floods.

But on the other hand, there is also something new afoot. Extreme rain events. The India Meteorological Department (IMD) divides extreme rainfall events into two categories—rainfall of 124.5-244.4 mm in 24 hours is “very heavy” and rainfall more than that is “extremely heavy”. In July alone, Assam recorded six “very heavy” rainfall days. In Madhya Pradesh’s Burhanpur and Betul districts, in one day—on July 12—it rained to ruin completely. This is because rainfall was 1,000-1,200 per cent higher than “normal”. On August 20, Bihar’s 12 districts recorded “very heavy” or extreme rain events. In drought-hit Rajasthan, in just one day—on August 11—rainfall was 100 per cent above normal. In Pali and Sikar districts of the otherwise dry state, on that day, it rained so much that it broke all records—1,000 per cent above normal. The list goes on and on.

In each case what this has meant is as follows. One, the same region, in one stroke (literally) has gone from extreme and back-breaking drought to extreme and back-breaking flood. Two, in many cases, even when there is extreme flood in the state, the total rainfall received is below normal. In Assam, even when 90 per cent of the state is under water, the rainfall received was 25 per cent below normal. It is important to understand the “newness” in the growing numbers of “very heavy” rain events. The fact is that scientists have long warned that as the planet warms, not only will it rain more, but this rain will become more variable and more extreme. This is what we are beginning to see more and more.

My colleagues have also studied what scientists understand about the nature of clouds, and this points to yet another worrying discovery. It is possible that the air pollution that is choking us in our cities, is also disrupting the nature of cloud formation and leading to extreme rain events (‘On clouds’, Down To Earth, 16-31 August). The interaction between human-made aerosols—tiny organic and inorganic particles—and clouds is changing the nature of monsoon, say scientists. They find that these microscopic pollutants act as sites where water vapour condenses to form cloud droplets. The greater the number of aerosols, the higher the droplets. But then as nature’s interactions also show, the result is not linear or simple. This interaction between aerosols and droplets that form clouds could lead to less rain; it could lead to extreme rain and it could lead to lightening that, in turn, kills and maims on the ground. Despite the uncertainties that exist, what is certain is that change is happening; fast and deadly. It is time we took note of this new extreme reality of floods.