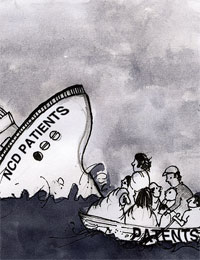 Historic it may be—even if watered down. The unanimous adoption of a “political declaration” by the UN on the need to fight the rising tide of non-communicable diseases (NCD) is a singular development and, as analysts have been reminding us, it is only the second time a health issue has been debated at a special meeting of the General Assembly. The first was when it pledged to take on AIDS a decade ago.

NCDs are infinitely more worrisome than AIDS. These diseases, identified by the World Health Organization (WHO) as heart disease, cancer, respiratory diseases and diabetes, are responsible for three out of every five deaths and afflict more people in poor countries than in the developed world. And the developing countries as we all know are in no position to provide the kind of treatment needed to fight the diseases which will cost the global economy more than US $30 trillion over the next 20 years. So what happens after this heart-warming declaration? Will everything fall into place after this global concord? I wouldn’t want to be a killjoy, but as someone familiar with the problem of access to medicines all I can say is be prepared for the inevitable stumbling block: intellectual property (IP) rights. A clear indication of the turbulence ahead is the omission from the UN document of any mention of the Doha Declaration. This is significant.

The Doha Declaration adopted in 2001 by the World Trade Organization (WTO), and bitterly contested by drug MNCs, amends its agreement on trade-related IP matters, or TRIPS, to allow developing nations to gain access to medicines necessary to fight diseases such as HIV/AIDS, tuberculosis and other epidemics. As a result, pharma companies could be compelled to allow manufacture of generic drugs for use in low-income countries in exchange for a small royalty even before their patents expire. Generic versions of the extremely expensive patented drugs brought the prices down to as little as 10 per cent of the branded drugs in some cases. Reports about the negotiations preceding the General Assembly indicate that developing countries had attempted to include the declaration in the document on NCDs but could not succeed because the US and the EU would not hear of it. The sticking point, it appears, was whether non-contagious diseases could be considered epidemics—the classical meaning of the term is of disease spread by contagion—although the declaration describes them as “a challenge of epidemic proportions”. The careful terminology also reflects the direction of the debate: NCDs should be seen as preventable diseases that result from unhealthy lifestyle rather than as problems requiring immediate treatment through diagnostics and drugs. All the same, the document does mention the “full use of TRIPS flexibilities”, which includes use of compulsory licences (CLs) to override patents. But here too there is a major distortion in the debate. Most IP experts tend to emphasise the point that such licences can only be given by governments in the case of a public health emergency, whereas the TRIPS agreement does not specifically list the reasons that might be used to justify compulsory licensing. Article 31 mentions “national emergencies, other circumstances of extreme urgency and anti-competitive practices”. The other distortion is the US stance: it actively discourages CLs by developing countries while making generous use of it domestically.

But with the declaration being struck out, it is clear the TRIPS flexibilities may be that much more difficult to use. Developing countries, wary of ruffling Big Pharma, have been timorous on CLs even for HIV/AIDS drugs; they are likely to be extra cautious on drugs for NCDs. Developed countries may have avoided any pressure, moral or otherwise, from being placed on their drug companies to cut prices of cancer and cardiovascular medicines as in the case antiretroviral drugs for HIV/AIDS. NCDs offer the most lucrative segment to drug firms because there are more drugs, more patients and the prices are much higher for the treatment.

Here’s what Health Action International, a Dutch nonprofit recognised globally for its advocacy of an equitable medicines policy, had to say in a briefing paper as the two-day UN meeting was getting under way on September 19. It notes the highest drug prices in the world are paid by those who suffer from chronic NCDs, people who pay from their pocket for treatment. “Their situation is dire; life-long diseases that require life-long treatments”, and the prices are such that “even some of the lowest-priced generics are out-of-reach”! Added to this is the “deplorable availability” of NCD medicines in a large number of developing countries. All of a sudden the world has also discovered the virtues of traditional knowledge (TK) and medicines. The declaration says it is important to respect, preserve and promote TK. I wonder what this means.