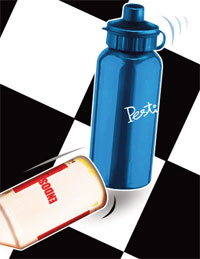 In David and Goliath stand-offs public sympathy—and cheering—is always reserved for the heroic small man who takes on the big bad guy. The David usually represents valour in the face of heavy odds. That is how the Indian pharmaceuticals industry projected itself when it began producing generics medicine at a fraction of the cost of patented drugs from the multinational companies. So when the issue of patent rights of the innovator companies came up, there was huge support for the generics companies turning out life-saving HIV/AIDS drugs from patient groups, lawyers, health activists and politicians.

Now the pesticides industry is positing an imminent ban on endosulfan by the UN’s Stockholm Convention on Persistent Organic Pollutants (POP) as a dubious battle over intellectual property rights (IPR) being waged by the European Commission on behalf of its global pesticides manufacturing giants.

The Pesticides Manufacturers and Formulators Association of India (PMFAI), whose leading lights are among the top producers of endosulfan, claims it is a move to deprive farmers of this cheap generic insecticide so that European multinationals can move in with their expensive new pesticides. The new chemicals, according to the association, cost 10 times as much and “will be damaging to the farm ecosystem as most of these are known to be harmful to pollinators such has honeybees”.

So why is no one cheering the domestic industry? You would expect that farmers, keeling over from high costs of inputs, would be out there on the streets screaming for their endosulfan. Not so. In parts of the country where aerial spraying of this toxic pesticide has probably been the cause for cases of illness, deformities and deaths, the use of this insecticide is banned—as is in 60 countries. Regular readers of this magazine do not need to be reminded of the harrowing chronicles of Kasaragod in Kerala and Dakshina Kannada in Karnataka. But the Government of India is firmly with the pesticides manufacturer in seeking to thwart the global ban.

The Stockholm Convention is a global treaty to protect human health and the environment from chemicals that remain intact in the environment for long periods, and in October last year, the POP Review Committee finalised a recommendation to the Conference of the Parties (CoP) that endosulfan should be considered for listing in Annex A of the Convention because “it is highly toxic to humans and many other animals and has been found in the environment, including the Arctic.” The proposal was placed before the UNEP in November 2007 and a decision by CoP is expected during its meetings which start on April 25 this year.

Since the recommendation, PMFAI has been on a public relations overdrive, holding media briefings or buying space in the pink press, which has been publishing its handouts as ‘Announcement/Corporate’. In all these instances, it is something called the International Stewardship Centre (ISC) which has been extolling the benefits of the generic endosulfan and the role of the Indian manufacturers in providing farmers with cheap pesticides solution. The spokesperson for the centre, which calls itself a non-profit for safe use of pesticides but is actually an organisation of pesticides manufacturers, is its chairperson R Hariharan.

In a report published in Business Standard on February 18, 2011, Hariharan is quoted as saying: “Indian companies account for over 70 per cent of this market which has come at the cost of the European manufacturers. The replacement value of endosulfan by patented alternative is estimated to be in excess of US $1 billion. As a result, endosulfan is today in the eye of the storm in the battle of ‘patented’ versus ‘generic’ pesticides.” Hariharan, incidentally, is vice-president, international business, with Excel Crop Care, one of the largest manufacturers of endosulfan.

The EU ploy, according to the ISC boss, is to bleed Indian farmers by getting this pesticide out of the market. Endosul fan costs Rs 270 per litre, while “alternative chemicals like imida chloropid are sold at more than Rs 1,800 per litre”. To reinforce the benefits of endosulfan, Hariharan claims “the alternatives are not a broad solution like endosulfan. So a farmer will be forced to buy several high-priced patented pesticides.”

Even if this were true, there is little resonance to this campaign. Is it because PMFAI is not really a David? IPR battles may be fought on ideological grounds but only if a strong legal case can be made out. Both are missing here. And although the endosulfan lobby has roped in retired agriculture officials to sing its praises, particularly for tea cultivation, PMFAI sidesteps one important issue. The European Union has stipulated the maximum residue limit of endosulfan in tea should be 0.01 ppm.

So whether endosulfan is banned or not, India’s tea exports to one of its large markets are doomed unless plantations switch to something less harmful. That much is patently clear.