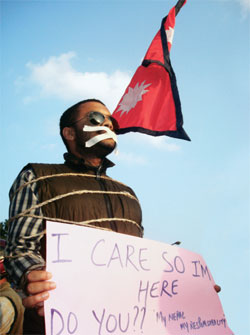 After more than six years of consultations by an elected constituent assembly, which was dissolved without achieving much, Nepal is back to drafting its new Constitution. A new constituent assembly has just been elected by the people, but it is not certain if it will finish the unfinished agenda of the last assembly. However, witnessing the process unfold is a lesson in nation building. For an Indian,Ã”Ã‡Ãªwho inherited a Constitution some six decades ago, it is an intriguing event to watch. More than the sheer complexities involved in drafting a Constitution, what surprises is the importance being given toÃ”Ã‡Ãªissues related to natural resources.

Nepal elected its first constituent assembly in April 2008. This was a part of the deal known as the Comprehensive Peace Agreement, signed in November 2006, between the Nepal Government and the Communist Party of Nepal (Maoist). The agreement mandated a new Constitution, Nepal’s seventh in history. There is an interim Constitution adopted in 2007 that provides the framework for the country’s governance. In 2012 the assembly collapsed. In November 2013, people elected a new constituent assembly.

Nepal is shifting to a federal structure of governance. This was agreed to, with the first amendment to the interim constitution in April 2007. How to redraw the internal map of the country by creating new states was the toughest challenge for the last constituent assembly. The assembly ultimately collapsed while trying to factor in the vast ethnic diversity and the natural resources of Nepal. There was no agreement on how many states will be created and which way the natural resources will be divided in a federal structure.

State-restructuring debates and identity politics played a key role in the dissolution of the constituent assembly. In fact, the 34 parties represented in the constituent assembly at the time of its dissolution remained divided over essential features of the new Constitution, such as federal restructuring, form of governmentÃ”Ã‡Ãªand affirmative action. All the political parties have now—more or less reluctantly—subscribed to federal devolution, but whether such restructuring should be based on ethnicity is still being debated.

There are two prominent debates taking place over the new look ofÃ”Ã‡ÃªNepal. First, many say that the new states should be formed according to the specific uses of natural resources. This group takes clues from the popular eight “ja”s that define Nepalese economy. They are: jal (water), jamin (land), jungle (forest), jaributi (medicinal plants), janasakti (human resource), janawar (animals), jarajuri (plants) and jalabayu (climate). There are proposals to have just three states covering three major river systems in the country: Gandaki, Koshi and Karnali provinces. This group advocates that the new states should be based on the importance of the use of above resources. It means each state will have a distinct or prominent natural resource use.

The second debate counters this argument and wants the new states to be decided on ethnic lines. They argue that Nepal’s various caste, language and ethnic groups have been discriminated against economically and socially. A clinical creation of states based on prominent resource use may further discriminate against them. Instead there should be a system that guarantees these groups the right to access natural resources.

The interim constitution has given priority to identities based on ethno-cultural lines. The 1990 Constitution emphasised one identity—that of a Nepalese. This change in how the Constitution looks at citizen groups has further precipitated demands for control of natural resources. Most of the ethnic groups depend on natural resources for sustenance. For them, their economic identity comes from such resources. It is assumed that these groups will expect their access to and control over natural resources to continue in new states. As the new constituent assembly finally convenes, it is not only going to redraw the internal map of the country but also, arguably for the first time, take stock of the ecological map.