New strategy suggested to save crocodiles

Respecting the territorial rights of crocodiles will help reduce the chances of conflict between the interests of humans and reptiles.

By Lala A K Singh 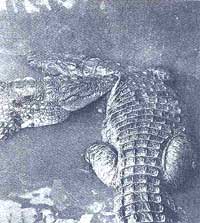 AFTER 18 years of conservation efforts, crocodiles in India are no longer a threatened species. Unless something drastic occurs in the 20,000 sq km of protected areas (including 8,300 sq km of special sanctuaries), the extinction of the crocodile is only a remote possibility. But though the track record of breeding crocodiles in captivity is excellent, their survival rate in natural habitats is low. And, unfortunately, people still have negative attitudes towards the lumbering reptiles.

Human encroachment on wetlands -- the crocodile's natural habitat -- is not only shrinking these areas but also increasing the chances of human-crocodile contact. Conflict is then most likely to result when there is an abundance of fish and the crocodile is considered a "nuisance". Although mugger (Crocodylus palustris) or marsh crocodiles are known to exist peacefully in water bodies used by humans and cattle, it is better to minimise such contact and prevent conflict of interests.

The mugger crocodile research and conservation unit in the Simlipal tiger reserve in Orissa stressed keeping the habits of muggers into mind is essential to sustain the benefits of existing crocodile management and to reduce man-crocodile contact (Indian Forester, Vol 117, No 10). The unit urges crocodile habitat managers to accept at least one of the reptile's characteristic -- site fidelity.

The unit's 29-month study in the mugger breeding enclosure in Ramatiratha showed how adult crocodiles share space and resources and how they chose basking, nesting and hunting spots. Site fidelity, as well as contact with the opposite sex, is determined largely by hierarchical order and this knowledge can help in demarcating areas exclusively for muggers.

When two or more muggers are in close proximity, they exhibit a fine sense of space partitioning between themselves. Crocodile behavior also reveals class distinctions, with the dominant alpha female often preventing lower females from mingling with alpha males. The alpha female, however, does have contact with beta males at basking sites and during mating displays.

Because of what the unit calls "reproductive overuse", there is a possibility of senescence (growing old) in beta males and so mugger breeding groups should be in the ratio of three males to six females. This ratio can be revised periodically, taking into consideration in-breeding factors.

The study shows alpha females tend to prevent other female crocodiles from using resources. As a result, gamma and delta females show an affinity to the beta female -- No. 2 in the group's hierarchy.

Identifying regular basking sites is significant in crocodile habitat management because these are also potential nesting sites. Crocodile site preferences change with the seasons and vary from individual to individual. In winter, crocodiles wallow in the sun because, unlike birds and mammals that regulate body temperature internally, reptiles need to depend on air, water and sunlight. Extensive basking helps crocodiles regain calories lost during the night and to improve calcium assimilation from food, thereby averting rubbery snouts and other skeletal problems.

During the monsoon, crocodiles abandon favoured basking and nesting sites and move into backwaters, side creeks or tributaries, where their prey is abundant. But individual animals continue to show site fidelity, either from choice if the crocodile is an alpha animal, or from compulsion, if it is lower in the social hierarchy.

The study recommends monsoon retreats and basking and nesting sites should form the "core area" of a riverine sanctuary, accompanied by properly managed human activity as is the case in other protected areas, such as tiger reserves. In long stretches of river that are designated crocodile sanctuaries, such as along the 570-km Chambal river, there will be several core areas, shown on maps as "beads of intensive-management areas".

The study urges the core areas to be made "no-entry zones" and for the seasonal retreats in the sanctuary to be enclosed, too, so as to avoid conflict between straying crocodiles and humans. This means crocodile habitat managers will not only have to identify specific mugger zones within a sanctuary, but also eliminate the shortage of resources caused by restricted crocodile movement.

Wetlands are where human and fauna interests clash the most, but the study notes crocodile sanctuaries cannot be sealed off from humans. Nevertheless, it stresses the importance of realising that while people do have alternatives -- for example, replacing fishing with pisciculture farms -- aquatic animals have no choice.

The problem of high crocodile growth rates in "closed-circuit farms", can be tackled by sustainable culling and involving industry in the maintenance of a few representative sanctuaries for each species. Surely, a greater contribution can be expected from the crocodile industry than mere trade in the guise of solving the problem of overcrowding of animals in captivity.