No charity at home

Is the individual's attempt at environmental awareness limited mostly to sermonising about big issues? 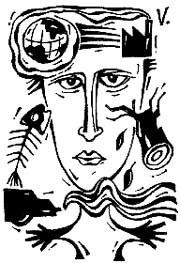 what exactly does it mean for someone to be environmentally conscious? As an experiment, list the first few causes of environmental damage that are uppermost in your mind, or ask an environmentalist to do the same. What are these typical damages likely to be: Industrial waste? Pollution by vehicles? Receding forest covers? Mining, dams and power projects? Global warming and ozone layer destruction are causes for concern, we are told. But as an individual, what can I do about it? I cannot possibly influence the decision on the Tehri or the Narmada dam, nor can I do anything to stop global warming or the depleting ozone layer. As an individual can I do something that fits comfortably within my daily routine? When these questions occurred to me some years ago, I had a heated debate with a group of friends - all of whom were studying science and were avid bird-watchers or wildlife enthusiasts.At the end of the debate we decided to get in touch with some environmentalists to find out how they moulded their lifestyles to become environment-friendly.

We wrote letters to people involved in environmental issues in various capacities - academic pundits of ecology and environmental sciences, leading persons as well as young participants in the environmental movement, forest officials and other government authorities involved in policy planning and decision making, and environmental philosophers. The response was good; many wrote back to us. But they ended up talking about big issues and advising us, whereas the real question was sidelined. Thinking they did not quite understand our questions, we prepared a detailed questionnaire about whatever specific measures these eminent people had taken to make their lifestyle environment-friendly, with respect to housing and furniture, paper, electricity, water, transport, clothes, kitchen and personal habits like consuming tea, coffee and tobacco. They were also asked to specify measures taken to ensure that their used materials went for recycling and whether they thought their lifestyle was sustainable in terms of resource use.

To ensure that everybody answered the questionnaire without inhibitions, the respondents were given the freedom of remaining anonymous. Despite this, when 85 per cent of the 200 people chose not to respond back, we were dismayed. Among the 30 responders, only two did not write their names. We pursued about 20 of the non-responders by mailing reminders, but without effect. However, the responses received were interesting. While some gave novel ideas for leading a more environment-friendly lifestyle, there was some startling information that showed little care about leading such a lifestyle. The responses were better for paper, power, transport and water. A few admitted that a curb on power and transport was more for economic than environmental motives. On the other hand, kitchen, clothes and personal habits were rarely given a thought. While a majority said they had done nothing new in the kitchen, it is worth mentioning that two families had done away with their dining tables.

Most striking, however, was the response on personal habits. Only two claimed to be occasional consumers of tea, coffee or tobacco. Most tea drinkers routinely had as many as six to eight cups a day. While most responders were sure that the used paper and plastic went for recycling, only one person claimed segregating kitchen waste from other wastes, and another regularly handed over recyclable materials to rag pickers. Seven families used kitchen waste for gardening and composting. Although the group contained ecologists and resource economists, none tried to collect data on personal and familial resource consumption. A few claimed to have a rough idea of their resource consumption and made sure that it was reasonable.
There was a tendency among respondents to talk about public awareness for environment-friendly lifestyles, while the questions clearly referred to their own lifestyles! It seemed environmentalism is all about sermonising the government, advising tribals, generating attractive slogans or - at a somewhat more serious level - collecting lots of data, doing plenty of statistics and getting your bread and butter out of it.

But there is another side to this coin. We also came across people who made it a point to use both sides of a sheet of paper, including envelopes; cycled or walked down short distances; who did not possess any wooden furniture, not even tvs or vcrs. Then there were persons who had almost totally given up tea or coffee and still felt guilty about whatever little tea and coffee they consumed once or twice a month. The majority of these people are young. We got what we wanted to know. And now I know what I can do as an individual, in my own life, for the environment.

Aadish Dani is with the Life Research Foundation, Pune.