A scientific conservation programme notwithstanding, the dugong remains in peril 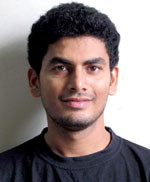 A loud “oooooph” was heard as the giant surfaced, the sound loud enough to capture the attention of people across the shoreline. They saw a mermaid-shaped body gently skimming the surface of the water. A loud splash, and the animal disappeared into the deep blue, leaving a quizzical look in the eyes of the people.

Reacting to the sighting, a few curious ones entered the water with snorkel and mask, while others watched impatiently for another glimpse. After all, this was no ordinary sound—it was from a mammal that is highly endangered in the Indian waters. It is the sole remaining species of the family dugongidae, and is found only in a few pockets of the Pacific and Indian oceans. The only known herbivorous marine mammal, dugong lives long, has low reproductive rate and grows slowly. The International Union for Conservation of Nature (IUCN)ÔÇêhas listed them as vulnerable to extinction. According to historical accounts, dugongs were present in many parts along the western and eastern coasts of India.

A few indigenous tribes of the Andaman and Nicobar Islands hunt dugongs mainly for their meat. In 2001, over 200 dugong killings were reported from the Gulf of Mannar. Strangely, no one has been charged for the crime. Dugongs’ behaviour makes it easy to trap them. If a poacher swims alongside a dugong and throws a loop around its neck, it will submit to being pulled ashore. A mother will unfailingly follow a calf looped in this manner and vice-versa.

During the past century, this placid mammal was brought to the brink of extinction in many parts of the Indian waters, including the Lakshadweep Islands. This decline went unnoticed, and the dugong was, perhaps, mourned only by the tiny remoras and pilot fish, which take free rides and some nutrition by feeding off parasites from the dugong. Today, dugongs are confined to three regions: Gulf of Kachchh, Gulf of Mannar and the Andaman and Nicobar Islands. 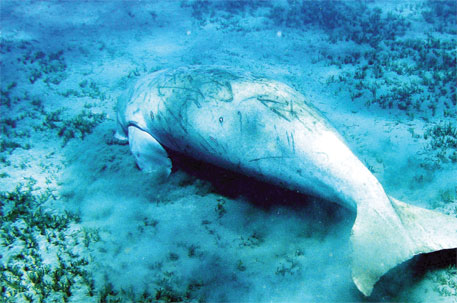 The first major conservation impetus came in 1992 when the Union Ministry of Environment and Forests (MoEF) amended the status of the dugong, giving it legal protection under Schedule I of the Wildlife (Protection) Act. MoEF also directed the Zoological Survey of India (ZSI) to study the status and distribution of dugongs in the Gulf of Mannar and Palk Bay. ZSI scientists chalked out a methodology for surveying dugongs, including aerial surveys. During the two-year study, the scientists could not sight a single living dugong. In spite of their initial enthusiasm, the scientists received little political and financial support for the surveys, except from certain states. The director of the Gulf of Mannar Park Authority and the chief wildlife warden of Tamil Nadu forest department have been at the forefront of dugong conservation. Subsequently, Andaman and Nicobar Islands initiated measures to protect dugongs, and most recently, Gujarat.

In 2002, the dugong was declared the state animal of the Andaman and Nicobar Islands. In 2007, Reef Watch Marine Conservation initiated ecological studies on dugongs in the Islands. Their preliminary results indicated the presence of dugongs in many parts, with Ritchie’s Archipelago having the highest number. In the same year, behavioural studies were carried out for the first time on dugongs in the wild. Later, awareness campaigns were held across the Islands to reduce hunting.

Parallelly, the United Nations Environment Programme released a report, which highlighted that industrial development, toxic runoffs, heavy marine vessel traffic, oil spills and dredging were the main causes for habitat loss of dugongs. In 2008, the government signed an MOU under the Convention of Migratory Species to conserve and manage dugong and its habitats. But stranding and killing of the mammal continued. Most of these incidents were hushed up. The ones reported were seemingly unworthy of any attention of the media and authorities. 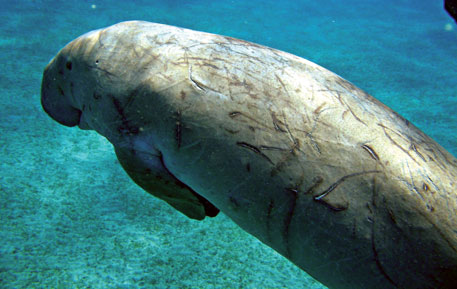 The tide turned when an adult female dugong was found dead on a beach at Neil Island in 2009. The carcass had stab marks all over the body. Pieces of flesh had been sliced off from the posterior and around the eyes. The mammal had been poached. The same dugong had been sighted idling in the waters a few days before. Worse still, a calf was spotted by snorkellers off the same beach a week before. If the killed dugong was this calf’s mother, the survival chances for the calf were bleak.

During investigation, many facts were revealed. The killing of dugongs had been going on for years and continues despite legislation. Although most islanders were aware that dugong poaching was a legal offence, they still coveted its meat as a delicacy. The media was strident in denouncing the inefficiency of the forest department. For once, the voices of those involved in grassroots-level conservation were heard. Non-profits and individuals came together and the matter was discussed in forums at the state and national levels. Letters were sent to political leaders, including the prime minister and president of India.

Impetus from the Wildlife Institute of India and non-profits on the National Board of Wildlife (NBWL) led to the formation of an NBWL sub-committee to recommend strategies and actions for conservation of marine species in India. Their mandate was to review the existing Marine Protected Areas and suggest new ones, identify flagship marine species that need immediate conservation, and to suggest guidelines for the preparation of an action plan for their conservation.

For the first time, a sub-committee of appropriately qualified members was working on conservation of marine species and systems. Crucially, the committee transformed information from researchers and scientists into action. Since its two meetings on July 22 and November 6, 2008, it has taken many decisions—noteworthy being the selection of seven species for preparation of recovery plans. The dugong was placed as top priority in the Species Recovery Programme. MoEF has also constituted a task force to chalk out steps for dugong conservation. The task force’s first meeting was held on December 15, 2010.

Though workshops and meetings are crucial, will they really make a difference to dugong numbers? What is evident is that money will be sanctioned to authorities for dugong conservation. But it remains to be seen whether they will be able to utilise it effectively to get relevant information and transform this information into action. Nevertheless, it is significant that India is pushing a science-based conservation for the marine system. If it succeeds, dugong can be a model for conservation of marine species and it won’t take long for the dugong to re-establish its population.

Vardhan Patankar is a marine biologist with Nature Conservation Foundation