No room for recycling

Give waste pickers their due

A swarm of flies buzz on top of a trash mountain, dogs bark at the crows hovering above, while 11-year-old Salman gathers waste at Sector-18 Rohini in Delhi. Every day at 5 am, he rummages through the rubbish heap for plastic, metal, glass and other recyclable items. In nearby slums, women and children segregate waste with bare hands, without masks, gloves and boots. They earn Rs 100 to Rs 130 per day after selling the waste at recyclers’ market.

Their lives have been captured by the lens and some of the images showcased at the recently concluded photo exhibition by Aman Trust at the Jawaharlal Nehru University. There is an old saying that one man’s trash is another man’s treasure. For Delhi’s 350,000-odd waste pickers, trash is livelihood.

Under the Jawaharlal Nehru National Urban Rural Mission, a large chunk of Delhi’s waste has been privatised. With the Municipal Corporation of Delhi (MCD) subcontracting big private players to collect waste, livelihood of waste pickers like Salman is increasingly jeopardised. For the past few years, MCD has also been trying to convert the city’s trash to electricity. Despite evidence of technology failure and bitter opposition from residents and environment groups, four waste-to-energy incinerators have cropped up in the capital. Supported by UNFCCC’s Clean Development Mechanism, these projects often receive climate subsidies and carbon credits according to the amount of methane captured from landfills (as a result of breakdown of organic waste) or the amount of waste they incinerate.

Such a regime favours waste disposal, not recycling. Technical solutions to the issue of waste, that often figure in official plans, favour bringing various processes of waste handling under a uniform system. This waste management regime calls for increased role of private sector, which further leads to displacement of the informal recycling sector. 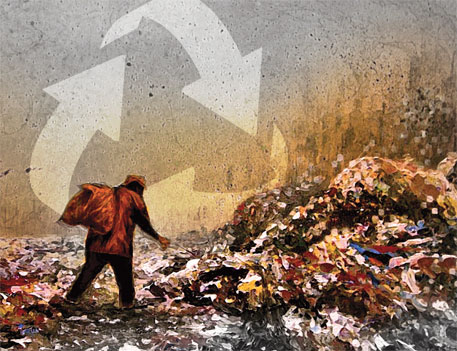 Every day, Delhi produces 8,500 tonnes of waste. Informal labour carries this waste from buildings and households to disposal sites. Pickers (kachrawalla) and itinerant waste collectors (kabadiwalla) constitute the lowest rung in the occupational ladder, for they collect waste directly from its origin. They are often the most marginalised and do not have alternative livelihood options. They are paid only for the waste they collect, and not for the benefits they create as the first in a chain of recyclers. Because they are self-employed and not recognised or recorded in formal sector, labour legislation or other policies do not apply to them.

Sociologist Kaveri Gill, in her book Of Poverty and Plastics: Scavenging and Scrap Trading Entrepreneurs in India’s Urban Informal Economy, points out that waste pickers are mostly Dalits, Muslim minorities, Christian converts and Bangladeshi migrants who usually belong to castes that have historically been engaged in “unclean” and “polluting” livelihood. In socially segmented Delhi, their occupational mobility and access to waste is further mediated by negotiations, compromises and interaction with indifferent residents, suspicious gatekeepers of colonies, policemen and superior municipal sweepers.

As the world-class city marches towards its twin targets of cleanliness and power generation through so-called scientific waste management, invisible waste picker battles for his livelihood.

Jayanthi A Pushkaran is at the Centre for Studies in Science Policy, Jawaharlal Nehru University, Delhi. The views expressed by the author are personal