Environmental concerns and the end of the Cold War are spurring radical changes at the UN. But the revamp is turning out to be another thorny issue. 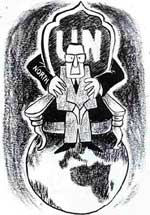 THE END of the East-West conflict and growing Western interest in environment is, at the root, interestingly, of the changes taking place in the UN. The stimulus for change comes from the organisation's major contributors, mainly the US, who had used the world body in the past to score successes in the Cold War. Now, the developed world sees the UN as a more effective global governor, which effectively means, governor of the Third World.

The North's urge for a more effective UN is matched by the South's aspirations. But, developing countries want the UN to be mainly an economic force because this gives each of them a vote, regardless of their financial contributions.

Boutros Boutros-Ghali, who has just completed his first year as UN secretary-general, is trying to meet these divergent objectives by streamlining the secretariat and simplifying decision-making.

A major drive in economic and social policy forms a large chunk at present of the UN's work, excluding its peacekeeping operations. Developing countries are pushing to bring major economic institutions such as the World Bank (WB), International Monetary Fund (IMF) and General Agreement on Trade and Tariff (GATT) within the scope of the UN system. But as this may not be possible legally, the push is being done indirectly.
The Economic and Social Council (ECOSOC), the UN's policy-making body with a rotating membership of 54 countries, is the target of major modifications, with Boutros-Ghali seeking to separate its organisational, coordination and policy-making functions. A separate, "high-level segment" is being created in ECOSOC specifically to debate major economic and social policy issues and its next session is scheduled to take up the problems of humanitarian assistance and of malaria control. It is expected to be attended by ministers of member-countries and will include a one-day policy debate with the heads of WB, IMF and GATT.

If the session succeeds, it would bring the WB, IMF and GATT to some extent within the UN ambit. Says Arjan Hamburger, economic minister at the Netherlands Mission to the UN in New York, "These sessions are expected to guide the policy of WB, IMF and GATT."

Meetings of ECOSOC's second segment also are expected to be attended by senior officials, who will review the UN's coordination and operational activities in such areas as economic and social policy. The third segment, called the International Development Council, will reflect the balance of power between UN's environment and development work.

The other key recommendation made by the UN committee headed by Jan Pronk, Netherlands minister for development cooperation, and Enrique Iglesias, Inter-American Bank president, was to stabilise UN funding through a combination of negotiated pledges and contributions, both assessed and voluntary. This move has been strongly opposed by G-77 countries, who have already expressed their inability to increase their UN contributions. Ironically, G-77 members include rich nations such as Saudi Arabia and South Korea.

Western nations are also reluctant to raise their contributions and as a result, the Commission for Sustainable Development has been formed within the existing UN budget. An increase in contributions, however, is the least of Boutros-Ghali's concerns, because several countries have not paid their routine dues for years, with USA topping the list.

Countries that are major contributors in real terms and are likely to agree to increase their funding include Germany and Japan. They want greater influence in the UN, but this is resisted by the US, which wants to stamp its authority on the UN, but is unwilling to pay even though this creates a perennial funding crisis.

Boutros-Ghali has abolished several senior posts in the UN system and also closed down smaller UN agencies, such as the UN Centre for Human Settlements and the UN Centre for Transnational Corporation. Their work has been taken over by existing large agencies. United Nations Development Programme (UNDP), the biggest spender in the UN system, has had its budget trimmed by 25 per cent.