Not a matter of religion

The recent terrorist attacks have again led to fingers of accusations being pointed at Muslims. And when the spotlight is on the community, its educational backwardness inevitably becomes a matter of discussion. Some hold that the root of Muslim educational backwardness is Islam itself. Associated with this is the understanding that Muslim parents prefer to send their children to Islamic religious schools or madrasas, instead of to general schools, hence their educational "backwardness".

Islam, properly understood, is in no way opposed to 'modern' knowledge. The first word of the Quranic revelation to the Prophet Muhammad was the command to 'read', and the Islamic textual tradition is replete with exhortations to acquire knowledge.This encouragement explains, to a considerable extent, the impressive scientific advancements that characterized classical Muslim civilization while Europe was still in the throes of the medieval Dark Ages. So to claim that Indian Muslim educational 'backwardness' is a product of Islam is misleading.

The related argument--that Muslim educational 'backwardness is a result of Muslims preferring madrasa or traditional Islamic education and spurning 'modern' education--is equally fallacious. As the report of Justice Rajinder Sachar committee pointed out in 2006, hardly four per cent of Muslim children of school-going age are enrolled in full-time madrasas. The rest go to regular private or public schools, although many of them might also study about their faith in part-time mosque schools or maktabs, or else do not study at all. This argument also overlooks the fact that, increasingly, although not as fast as many Muslim reformers would insist, a lot of madrasas have started making arrangements for their students to gain at least a basic knowledge of such 'modern' subjects as English, Hindi or regional languages, mathematics and science.

It is a general phenomenon, exemplified in the case of Muslims as well as Dalits and Adivasis, that poverty and the lack of a culture or tradition of learning among the poor is the single major cause of educational marginalization. Most Indian Muslims are poor, and this effectively rules out costly, and increasingly more expensive, quality private education for their children. It has been found that in the sphere of public education, too, Muslims face particular problems. Thus, many Muslim localities are bereft of government schools, particularly separate girls' schools. Allocation of funds from various government-sponsored educational schemes and projects to Muslim-dominated areas is likewise relatively meagre. It is quite likely that if the State had provided good quality schools in Muslim localities, many Muslim parents would have sent their children there, rather than to madrasas or to sweat-shops where they earn a pittance.

There are also factors--internal to the community--that have exacerbated Muslim educational marginalization. One of the most crucial of these is the lack of an appropriate leadership, particularly in north India, where the bulk of the Indian Muslim community is concentrated. Before Partition, this region boasted a sizeable Muslim intelligentsia and middle-class, which played a leading role in promoting modern education in the community. A large section of this class--perhaps the majority--migrated to Pakistan after 1947, leaving the community, now consisting mainly of the poor, leaderless and rudderless. A liberal, modern Muslim middle-class, such as existed before Partition, could have played a key role in setting up modern educational institutions with the community's resources and could also have pressured the state to do so. 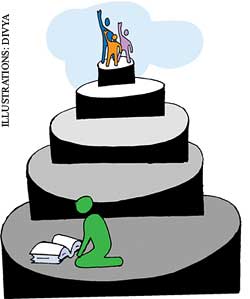 The place that the Muslim middle-class played in providing leadership to the community before 1947 was taken over largely by madrasa-trained maulvis or ulema. These leaders were inhibited by the education that they had received in madrasas, and thus did precious little for the expansion of modern education among Muslims.

To add to this, the trauma of Partition, mounting waves of communal riots, in which Muslims inevitably suffered the most, turned the community increasingly insular. This left little time or energy for social reform and institutional building within the community, including in the field of education.

Yoginder Sikand is the author of Indian Muslims Since 1947 (Routledge, 2004)