The problems associated with the accidents at the Fukushima nuclear reactors continue, weeks after an earthquake and a tsunami struck Japan. On March 27, Japanese officials announced that leaked water sampled from one unit was highly radioactive, exposure to which would cause severe radiation sickness in hours. Estimates of releases of cesium-137 and iodine-131, two radionuclides likely to cause the greatest harm to human health, by different agencies are now a significant— and increasing—fraction of the release from the 1986 Chernobyl accident.

In the quarter century since Chernobyl, the nuclear industry had persuaded many that catastrophic accidents were a thing of the past. Its claim stands exposed by the disastrous accident at Fukushima. But nuclear power advocates, especially in India, have been trying to portray the events in Fukushima as an aberration.

Officials from the nuclear establishment claim that India’s nuclear reactors are safe from catastrophic accidents because they have “defence-in-depth”—multiple protective systems all of which have to fail before a radioactive release occurs. However, while it might be improbable for these systems to fail independently, it is possible for one event to cause simultaneous or sequential failures. In Fukushima, the tsunami knocked out the primary and backup power supply and flooded the basement housing the electrical switch yard. In 1993, a fire caused a blackout at the Narora nuclear power station, disabling cooling systems. It is very hard to estimate probabilities of events like these.

Others get even the basics wrong. Ron Somers, the president of the US-India Business Council, explained, “it’s a blessing India is getting its civilian nuclear programme started now because new technology in the event of such an earthquake would automatically shut down”. Somers’ eagerness to promote the American nuclear industry seems to have left him confused. The Fukushima reactors did shut down soon after the earthquake. Unfortunately, just because a nuclear reactor is “shut down” does not mean that its operators can call it a day and go home. 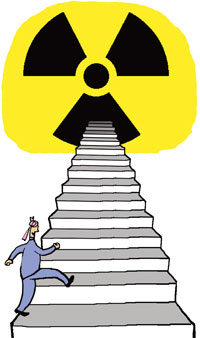 The nuclear fuel in a reactor core is highly radioactive and so, even after the reactor shuts down, it continues to produce heat. If this heat is not removed, the reactor fuel heats up and can melt. This is where the problem arose in Fukushima. The multiple cooling systems failed for one reason or the other.

Policy-makers have made misleading claims. National security adviser Shivshankar Menon suggested a Fukushima-type accident could not happen in India: “The fire (in Japan) was a hydrogen fire in the area where spent fuel is stored.... They (Atomic Energy Commission, AEC) tell us this is most unlikely.” Hydrogen fires might be unlikely but there is no reason they won’t occur at AEC’s spent fuel ponds. Should there be a loss of cooling water, as happened at Fukushima, the nuclear fuel will heat up. With rising temperature, the fuel cladding, made of zirconium, will react with water to produce hydrogen. Hydrogen is inflammable whether it originates from spent fuel in Jaitapur or in Japan.

The government refuses to acknowledge the simple but unpalatable truth that severe accidents are possible, even if rare, at all nuclear facilities. This is not simply due to its belief in the nuclear establishment’s safety claims but also because it has been trying to force-march the country into a massive nuclear expansion, especially after the Indo-US nuclear deal. In 2008, it staked its power on this issue and survived only—as shown by recent WikiLeaks revelations—with dubious means. Last year, it spent an entire parliament session pushing a nuclear liability bill that took away the rights of Indian citizens to claim adequate compensation from international nuclear vendors.

“India does not have the luxury of renouncing nuclear power,” Ashley Tellis, a key mediator of the nuclear deal said recently. Given that nuclear power is costly and hazardous, and that its pursuit is damaging India’s democracy—whether in the “cash for votes” scandal or in repression of popular protests at Jaitapur—the converse is true: India does not have the luxury of pursuing a nuclear expansion.

The authors are physicists with the Coalition for Nuclear Disarmament and Peace. Ramana’s book on nuclear energy in India is soon to be released

How vulnerable are India's nuclear power plants to disaster
19 years of reportage on nuclear energy, quakes & tsunami
Armed against the nuclear