The betel nut is an integral part of life in many north-eastern states; it has some medicinal properties, too 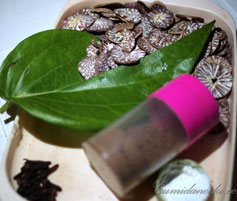 The first thing that comes to my mind when I see betel nuts is a vivid image of Aunty Mildred, the warden of the boarding house in Shillong where I stayed during school days, breaking betels in a small crusher. She would then proceed to put the betel in her toothless mouth and chew on it. She used to carry the nuts, called kwai by her tribe, the Khasis, in a sling bag tied around her waist. As soon as she would be free of her chores, she would take out the bag and settle to enjoy her kwai, without which she seemed unable to function.

For the Khasis, kwai is an integral part of their lives. Visit Meghalaya, and nearly every Khasi household will offer you betel nuts even before the customary glass of water arrives. The Khasis bond over kwai, start their meal with kwai and end it with kwai. In fact, when anybody dies, they say the person has gone to heaven to have kwai with God. There is a reason for this. In Khasi society, the betel nut is supposed to remove the disparity between the haves and have nots, because even the poor can afford to buy it and offer it to guests. The betel nut, thus, is a great social leveller.

Must in religious rituals

The betel nut occupies an equally important place in the lives of people in other parts of the Northeast. In Assam, where it is called tamul, betel nut is a part of every wedding invite and important religious functions. In fact, if you don’t invite guests with tamul, it means you don’t really want them to attend the wedding. During Bihu festival, it used as a decoration and gifted to men and women who have achieved something remarkable as a mark of honour during felicitations. Tamul is served to guests on a small platter along with fresh betel, which is pleasing to the eye.

In Manipur, the betel nut is a mandatory item on every religious occasion of the Meitei community: birth, marriage and death ceremonies. During birth ceremonies, kwa or betel nut is offered to guests. During feasts, it is served after a meal. Kwa is believed to aid in digestion. In Nagaland, people of the Ao tribe chew betel nuts after a good meal. In Mizoram, every local paan shop will have what the Mizos called kuhva hring (green betel nut), and it is commonly offered to visitors and guests. The betel nut is, however, not so popular in Arunachal Pradesh, Tripura and Sikkim.

Some people use betel nuts as a stimulant while others for its medicinal properties. Arecoline, an odorless oily liquid found in the nut is an alkaloid-type substance; it is said to have a nicotine-like effect. Arecoline is also useful in getting rid of parasitic worms. If taken in powdered form, betel nut can be used to remove tapeworms and other intestinal parasites. It is widely used to cure toothache. Many believe that it helps strengthen the gums and prevent perspiration. The betel is also believed to aid in digestion and is even used as a laxative.

Housewives vouch for the betel leaf which is used for stopping bleeding from cut wounds. It has antiseptic properties; it is crushed in the mouth and applied on the wound to hasten healing.

There are some scientific studies being done on use of betel nuts after accidents or stroke; the arecoline in it keeps the mind alert. Some people use betel nut extract to help improve speech, bladder control and muscle strength.

But clearly excess consumption of betel nuts is not good for health. Nevertheless, the next time you are offered tamul or kwai or kwa in the Northeast, do not refuse the offer and annoy your host. Chew and enjoy the unique flavour.