Of pseudo-sangams and de-linking of rivers 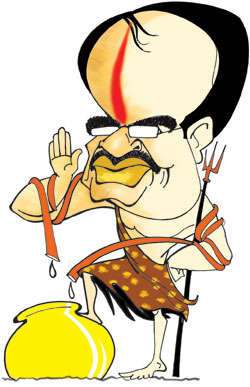 I had hardly breathed the phrase “Narmada-Kshipra” when the young driver brightened, and said, “Yes yes! I know the spot!”

“You know it?” I echoed in surprise. Normally, urban taxi drivers’ and environment journalists’ sense of geography rarely match. My past experience has always been of  the driver and I having to get off the car on the way frequently to ask for directions to locate villages no one else bothers with.

“Yes,” he reiterated brightly, “We go there on Sundays, sometimes.”

The puzzle solved itself half an hour later when the taxi pulled up in front of a huge iron gate, behind which lay an all-concrete, landscaped riverfront, reminiscent of the now famous Sabarmati riverfront  in Gujarat. For a moment, my mind goes back to the days just before the national elections last May. Exploration revealed an artificial fountain with a statue of a Hindu goddess, banners with appropriate proclamations about the sacredness of Narmada water, concretised ghaats for taking sacred dips – sex-segregated, of course – and a massive amount of chain-link fences. All picture perfect. A signboard, a man selling coconut water and some hangers on, all these signs confirmed that this was indeed the “holy sangam” of “Narmada Ji and Kshipra Ji”.

“Why don’t you tell the guard over there to turn the fountain on (it is 8.30 and the whole place is deserted),” suggests the coconut-seller helpfully. “That way you will get good pictures.”

Ok, so is this it? The project that is supposed to rejuvenate the Kshipra river and provide drinking water to two municipalities and 70 villages?

It is only after 15 minutes of hectic inquiry that I learn that the “real sangam” is near a village two km away, where the real river Kshipra is (this one is a pseudo-sangam, with no river to back it up). And the village is not even called Ujjaini, a rather sacred-sounding name connected to the city of Ujjain—as the Narmada Valley Development Authority (NVDA) claims it is, but just plain, ordinary Mudla. So I can go back to my usual routine of asking for directions and taking wrong turns on kacchha roads every now and then.

Whether it is the Ganga, the Sabarmati, or this lesser known Narmada-Malwa link which proposes to rejuvenate no less than five rivers in the dry Malwa region of Madhya Pradesh (MP) with water from a single river, the most prominent clause in the BJP’s water management policy appears to be to give every project a religious twist. In MP, especially, the sacred stature of the river Narmada has become a convenient handle to foist expensive private water supply schemes on people. The ruse has been tried in Khandwa, where stiff public protests have held up the Narmada Jal Yojana, and is now being tried out in some smaller towns.

But the Narmada-Kshipra link certainly takes the cake. At every turn in exploring the merits of this project, I found myself bumping into religious jargon. To begin with, the project itself is called the Simhastha Link—referring to the Simhastha Kumbha Mela, which is due in Ujjain in 2016. Once every 12 years, MP’s Water Resources Department is hard-pressed to fill the Kshipra river-front in Ujjain city with water so that Naga sadhus and other bigwigs of organised Hindutwa can have their ritual dip as if all is OK, without bothering their holy heads about why their sacred Kshipra is dry and dead. In 2016, this job will be done by this link at the flick of a few buttons. 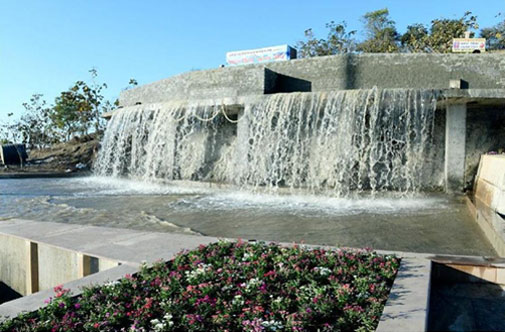 Secondly, the government appears determined to project the link as divine – actually a macho-divine endeavour on the part of the chief minister. Travelling down the 48 km pipeline of the link, I came upon legends like “Shiv ke bhagirath yatnom se Malwa ko vardan mila” (Due to the Bhagirath-like efforts of Shiv, Malwa has received a boon) and Shiv Ji Narmada ko Kshipra mein layo re (Shiv Ji has brought the Narmada into the Kshipra). So, chief minister Shivraj Singh Chouhan is projected not just as – through word-play, of course –the Hindu deity Shiva, but also the mythological hero Bhagirath, who, through centuries of meditation, finally forced the sacred river Ganga to descend on earth (personally, I would advise him to choose either Shiva or Bhagirath soon before he gets his identity all tangled up). The message couldn’t be clearer if they had added that picture of ‘Shiv Ji’ flying in a superhero costume with the Narmada spilling on to Malwa from his matted locks.

Even the NVDA, the implementing agency for this project, is not just unashamedly bandying about this “holy vocabulary”, but also pumping money into it. The NVDA’s technical maps, full of incomprehensible terms like “rising main, break-pressure tank” and a whole lot of abbreviations, nevertheless, label the point where the pipeline from Sisliya tank has been connected with the Kshipra river (now a concrete irrigation channel) in Mudla (sorry, Ujjaini)  as the “Narmada-Kshipra-Sangam”. What’s more, the funding for the “pretty”, concrete pseudo-sangam came from the cost of the project itself, informs an NVDA official. And the cherry on top is that now NVDA is spending more money on – hold your breath – de-linking the Khan river, which naturally joins the Kshipra, from it, so that Indore’s sewage might not find its way into the sacred river and spoil the fun during the grand once-in-12-years mela (fair). What, you may ask, has all this got to do with providing drinking water to 70 villages? Critics who say that the mela is the real reason behind the Rs 432 crore-project and all those drinking water schemes are pure bunkum could not have got it very wrong.

“Why do they keep going ‘sangam-sangam’?” Asked a friend of mine who has researched the project and uncovered all the holes in government’s bombastic claims. “It is a pipeline after all, not a confluence. Even Indore city has a water supply project from the Narmada – should that be called the Narmada-Indore sangam?”

The why of it is obvious – it scores. And it covers up a lot of things. “The people are so awed by the prospect of Narmada water in their own villages that they forget to ask a lot of vital questions,” Shashikant Awasthi of village Piwdai tells me. Awasthi had been working for years under the Kshipra Punarprawah Abhiyan to revive the river in sustainable ways, but now he says no one cares. “There is easy water availability, and it is also sacred Narmada water, so everyone is happy.”

Everyone, that is, except for those who actually live near the sacred river. At the Sisliya tank, I meet a group of young men from a nearby village who tell me that no village in this area has received water from the Omkareshwar dam that had been promised to them for decades. “Shiv Ji sabko Narmada Ji ka paani pilayenge, bas jo unke paas rahte hain unhe chodkar” (Lord Shiva will give Narmada water to everyone except those who live near the river), one of them tells me.