The decision to import deer into mangroves lacks scientific understanding

The conservation broth has got eager hands to stir it. Some throw in extra spices to experiment with the taste. But that sometimes spoils the broth. For instance, the forest department’s prescription to tackle the dearth of prey base for tigers in the Sunderbans: release deer in the mangroves. The deer, in question, are not native to the Sunderbans nor accustomed to its saline conditions. They were bought from zoos and deer parks and dumped in the Sunderbans.

On January 13 this year, 65 deer were released in the Sunderbans and in August another 25. Newspaper reports say Kolkata’s Alipore Zoo will soon do away with another 60 deer. Brings back memories of an incident at Nandan Kanan zoo in Orissa some years ago. A cage with a majestic male tiger was attracting tourists. It was mealtime and the animal was roaring, anticipating delicious deer meat. I doubt if such sights will become common in the Sunderbans a decade from now.

I was at the Sunderbans for a tiger census in March. During the four-day stay, I did not see more than six deer. So either the tiger number attributed by the census is a myth or there is serious prey shortage.

A few months ago I was collaborating with a non-profit, which works with communities in the Sunderbans. One day a person informed us about a fair in which notorious poachers celebrate by selling deer meat. He did not want to protest but wanted us to convey his concerns to the authorities in Kolkata.

I know the forest department at the Sunderbans is doing good work by involving people in the region through eco-development and forest protection committees. The situation on the Indian side of the Sunderbans is better than in the Bangladeshi side, where a big cat strolling into a village is likely to be hacked to death.

But there is scope for urgent improvement. The beat officer, who was my team leader during the census, complained about the dearth of ground level patrolling staff. That’s one reason for rampant poaching in the Sunderbans.

According to recent studies, the landscape of the Sunderbans is going through physiological changes. Some scholars suggest increasing salinity could be affecting the behaviour of tigers. Many tiger experts suggest the animal is moving northward. Does this indicate the Sunderbans’ ecosystem is becoming unsuitable for the deer? We do not have answers. But if the answer is yes, then releasing deer into the forest will not be helpful.

The Deer Centre at Dobanki is supposed to acclimatise deer brought in from outside the mangrove ecosystem before their introduction into the forest. The Sunderbans face two high tides and two low tides in a day. During high tide nearly a third of the forest area is inundated. If the deer is not conditioned accordingly, it is likely to perish in the tides. The centre at Dobanki has not yet made any effort to condition the deer to tides.

We should understand the scientific implications of our decisions rather than providing short-term solutions and then finding out that the problem lies somewhere else.

Tiasa Adhya is a wildlife conservationist and freelance journalist in Kolkata 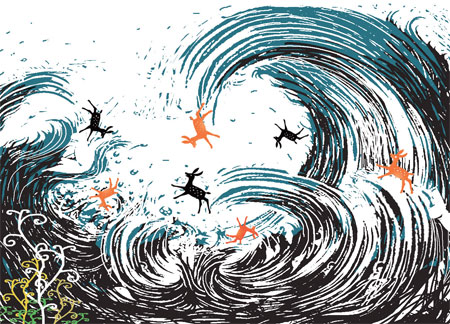