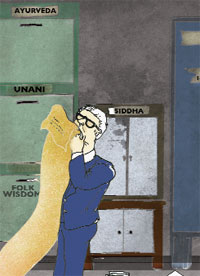 Jaundice in the family has turned my thoughts to traditional knowledge. Modern or Western medicine has no remedy for jaundice, which is caused by an excess of the pigment called bilirubin in blood and is most commonly a symptom of viral hepatitis. The best treatment I know of is the use of a herb, keezhanelli, that my grandmother used to administer to those suffering from this debilitating condition. Liver malfunction can be lethal, but drinking the juice of these leaves would set the patient right in a fortnight to a month, depending on the severity of jaundice, my feisty grandmother would declare as she administered this extremely bitter extract to neighbourhood patients in whichever part of India she was visiting at the time. Sometimes it was difficult for her to find keezhanelli but she managed by dint of searching; she knew her herbs pretty well, coming as she did from a family of vaidyars in Kerala that had nurtured such plants for making Ayurvedic medicines.

Keezhanelli, Phyllanthus niruri to give its Latin name, is one of the hundreds of wonder plants used by traditional healers across the country and has its origin in the Siddha system of south India. Knowledge of such medications is becoming pretty rare these days, but much research has been done on the properties of such plants, specially by the Siddha Central Research Institute in Chennai. This traditional knowledge (TK) has been commercialised to a certain extent because keezhanelli powder and tablets are available in the market.

TK, however, is not just about medicines and methods of healing, although this is the area most vulnerable to misappropriation since the pipeline of new chemical entities with pharma giants is drying up. So there is a rush by companies, institutes and individuals to take out patents on formulations based on centuries- old wisdom the world over. India’s solution to this challenge has been the Traditional Knowledge Digital Library (TKDL), a project initiated in 2001 by the Council for Scientific and Industrial Research (CSIR) and the Union health ministry’s Department of Ayush. It is now the repository of some 223,000 medicinal formulations (Ayurvedic, Unani and Siddha systems) that it has culled from ancient Indian texts at a huge cost. This database has been made freely available to the European, the US and Japanese patent offices in an attempt to curb theft of TK.

How does this work? Patent offices are supposed to refer to TKDL database before granting any patents. In some cases, applicants are asked to amend their patent claims, in other cases, based on the evidence of TKDL, they are thrown out or asked to withdraw. While the Europeans appear to be using it more than the others, the ministry and CSIR still have to challenge most of the claims.

A recent example is the case of using cow’s milk as a laxative. In 2009, Nestec S A, a subsidiary of Swiss multinational Nestlé S A, filed an application at the European Patent Office (EPO) claiming a patent on the use of cow’s milk for the treatment of constipation and as a laxative. To get a patent, applicants have to prove that the product or process is novel, nonobvious and has industrial application. EPO rejected Nestec’s application impressively titled “Lactoferrin and gut neuronal health in adults and/or elderly” after the authorities here gave them the references in several ancient Indian texts. As a result, the company “withdrew” its application filed in 2009, in January this year.

The TKDL initiative is admittedly not enough and it has come a bit late in the day, but it seems to be the best way to challenge erroneous patents. CSIR has had landmark successes in fighting wrongly awarded patents (neem and turmeric, for example) but it also has many setbacks as TKDL website—a fascinating window to the wisdom of the ancients— admits ruefully. What it also reveals is that misappropriation is not confined to foreign companies; Indian firms and research institutions have also tried to pull the same trick. Its listing reveals that the Bengaluru-based Avesthagen has been forced to withdraw three patent applications, while one by Lupin of Mumbai has been declared “dead”.

While TK encompasses cultural products and practices along with folklore, the big bone of contention will be plant resources as developments at the World Intellectual Property Office (WIPO) indicate. A meeting in February agreed to work on a single text for a future instrument but it remains a divisive issue. Developed countries want the term “intellectual property rights” used in the document to be replaced by “patents”, which others have a problem with.

And the demand of developing countries for the mandatory disclosure of the origin of genetic resources and associated TK in patent applications is vehemently opposed by rich nations. They complain it would place a huge burden on inventors and patent offices since there is not enough evidence on this. But developing countries argue that it would help prevent theft. Can anyone deny that misappropriation has to stop?