On the trail of a man-eater

It was a cold, misty January morning as I drove through Moradabad district in Uttar Pradesh. The villages I crossed abutted lush green sugarcane fields. The harvest season was coming to an end; men, women and children were either busy cutting the standing crop or loading them on to trucks that would transport the produce to the sugar mills nearby.

The densely populated district is situated on the banks of the Ramganga river—a tributary of the Ganga. Moradabad city is popularly known as peetal nagari (city of brass) because of its brass handicrafts. But that was not what had drawn me to the district with the same name.

I reached Mitthanpur Mauja, a village on the border of Moradabad and Sambhal districts. The first person I asked for directions to the house of Raggu Singh volunteered to take me there. We walked through the narrow kaccha lanes made wet by rains the previous night.

The door to Raggu’s house was half open. I knocked. “Who is there,” called out a woman. I told my name and said I had come from Delhi to meet Raggu. She came to the door. We greeted each other. She pointed towards a frail looking old man. Raggu was in a brown outfit with a white shawl wrapped around his shoulders. He was staring blankly at a wall. There was an eerie silence. I moved closer to Raggu. Since I knew about his bereavement, it was difficult to start the conversation. I mustered courage and asked him, “how are you?” “What do I say?” replied Raggu. “I lost my son,” he said and broke down. I cursed myself for troubling him. 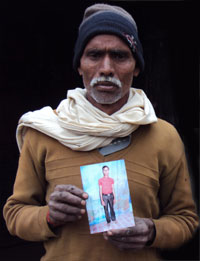 The room outside which he was sitting was dark, and had three cots and a drum to store grains. “After working hard each day, Vijay, I and my wife used to sleep in this room,” said Raggu, eyes welling. Twenty-one-year-old Vijay was a daily wager like Raggu.

Vijay was killed by a tigress in the wee hours of December 29, just a day before he was to get engaged to marry. This was a first-of-its-kind incident in Moradabad. Vijay was just the first prey of a tigress that was later declared “man-eater”.

As the children of his elder son flocked around Raggu, I asked for details of the incident. Raggu started narrating. “According to his daily routine, Vijay woke up much before us and left for the nearby fields to empty his bowels,” said Raggu. “Most of us wake up around 4.30 am when the village gets electricity, to plug in our mobile phones on charge because power supply is erratic,” Raggu went on.

“Not finding Vijay in the room, I called on his mobile to say that he should also put his phone on charge. But Vijay’s phone kept ringing. I waited for some time and dialled again. There was no response. I got worried and woke up my elder son. Both of us left in search of Vijay. It was still dark. We kept calling on Vijay’s mobile and heard it ringing close to the village pond. Near the phone, we found Vijay’s slippers. As I focused the torchlight on the ground, I saw blood stains leading to a nearby sugarcane field. As we entered a few metres inside the field, I could not believe what I saw.”

Vijay’s body was lying in the pool of blood. His torso was reduced to bones, said Raggu as he broke down again. He suddenly got up, wiped his tears and went inside his room. He brought out Vijay’s photograph from a polythene bag. “Vijay got it clicked in a studio in Moradabad city a few months back. We sent it to the family of the prospective bride,” said Raggu. “They immediately liked my handsome son.” 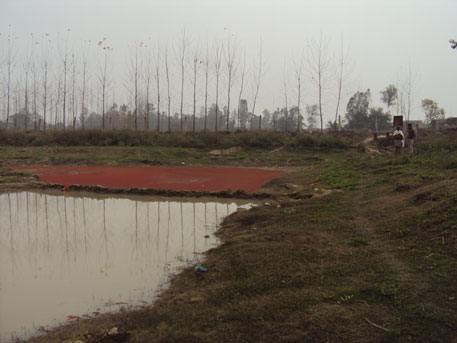 Unable to comprehend if I should further probe Raggu, I asked Vijay’s brother, who was till now silently listening to his father, if he could show me the spot where Vijay was killed. He agreed. Moving back through the same narrow lanes, we reached the nearby pond and then the sugarcane field where Vijay’s body was found. The field had been cleared.

As we stood discussing the incident, some other people from the village joined. One of them was Ramkumar who got injured by the big cat. On being asked how he got injured, Ramkumar said it happened the day Vijay’s body was found. “People from entire Mitthanpur Mauja and nearby villages had gathered near the body. The forest officials who reached the spot identified the pug marks leading to the nearby sugarcane field as that of a tigress. They said that the tigress was perhaps resting or hiding in that field. As we were very angry, we surrounded the field, pelted stones and hurled bamboo sticks. When no movement was noticed, I tried to move inside to see if the tigress is there. A few steps in and I was attacked by the tigress that clawed my face and chest. I saved myself as I had a bamboo stick. I ran out.” “We wanted to kill her,” said another resident of the village.

I looked at my watch. It was 3 pm. In half an hour I had to meet B C Brahma, district forest officer of Moradabad. He had told me that he had little time to spare as he was busy in the tigress-search operation. I took leave from Raggu and the residents of Mitthanpur Mauja. The tigress which escaped from the village reportedly killed five more people, three in Moradabad and two in Bijnor district north of Moradabad, between December and January. Most of the killings happened near sugarcane fields. “Like everybody, we too are surprised as we had never heard of a tiger in Moradabad, let alone tigers attacking humans,” said Brahma who had one hand in a sling. “People should not have agitated the tigress. We asked them to keep calm but they were in a very violent mood,” said Brahma. Other than Vijay, the tigress did not eat anybody else, perhaps because in each case people drove her away. “Mob behavior disturbs tigers, which makes them see humans as threat and may provoke the animal to kill humans in self-defence,” said Brahma. He said the tigress perhaps strayed from the Corbett Tiger Reserve along the Ramganga river or Uttar Pradesh’s Amangarh forest which lies in the buffer of Corbett.

The wandering tigress has still not been captured. The state administration, after declaring it a man-eater, gave orders to shoot it at sight. But after Maneka Gandhi, BJP politician and animal rights activist, intervened the priority now is to tranquilise and capture the tigress. In a recent development, it has now emerged that one of the two killings in Bijnor was the handiwork of a male tiger. That makes it two tigers on the prowl in Uttar Pradesh.
Scientists say that tigers are known to avoid humans and most killings are accidental in nature. Acts of tigers preying on humans are very rare and could be influenced by distinct factors which need to be studied.

What then made the tigress leave its habitat? Scientists point to some probabilities. It could be a case of overpopulation of tigers in Corbett, where the number of tigers has risen from 164 in 2006 to 214 in 2010, according to the last tiger census of 2010. It could have travelled along the Ramganga river and sugarcane fields must have provided it a conducive place to hide along the way. “Tigers are territorial by nature. As a result, fights for space are increasing. This is pushing some tigers, especially the old ones, out of the boundaries of protected areas,” said Ullas Karanth, director of Wildlife Conservation Society, a non-profit based in Bengaluru.

A group of scientists say that it is behavioural aberration for tigers to overcome the fear of humans and kill them and that this needs to be studied. “Blaming the human killings just on the increasing number of big cats would not be right. There could be some stress factors inside the park which may be pushing tigers out. That, we can only ascertain after proper long-term, area specific studies,” said Tito Joseph, programme manager, Wildlife Protection Society of India, a non-profit based in Delhi.

It is not only in Uttar Pradesh where the incidents are happening. Tigers have killed 17 people in last two months across the country (see ‘Tigers on the prowl’).

Influence of connectivity, wild prey and disturbance on occupancy of tigers in the human-dominated Western Terai Arc landscape