Many claim that proprietary software is going out of mainstream. Open source software, which allows anyone to make a new software version (not necessarily an application programme), port it to new operating systems and share it with others, is fast becoming a potent alternative. In India, Kerala has taken to open source software with gusto. But the state's association with open source has not always been without hiccups.

To understand the intricacies of this association, some history of Kerala's computerization programme would not be out of place. Initiatives in university examination sector, planning board and financial corporation were in unix even in 1985.In the treasury department, computerization was launched in 1996 under the National Informatics Centre(nic) and options were changed from Oracle on unix to db2 on Windows nt on price considerations. Other computerization drives in Kerala--in commercial tax and transport departments--adopted a combination of open source and proprietary systems (backend server system on unix/linux and clients on Windows).

When the Kerala government began decentralized planning in 1996, computerization was seen as essential for delivery of public services. That Microsoft products were cheap compared to other software operating systems such as sco unix was reason for the government to consider an mou with Microsoft. Microsoft's relational database system ms sql was also low priced compared to its competitor Oracle dbms. But deploying around 15 applications--that too with a Malayalam font interface--across 1,223 locations with minimal human resources meant training staff was the biggest hurdle.

At that time, free and open source software (foss) was making its presence felt and Kerala's computerization programme, Information Kerala Mission (ikm), had gone some way in developing applications and training personnel. So it could utilize open software for web based server applications for support and monitoring at various sites. But it's only now that websites are about to fully migrate to foss without disturbing routines. When applications are made fully browser based, ikm is hoping to have both Windows and Linux for local bodies. But re-training personnel will be a bigger issue even if total migration to a different platform and database is effected.

Programmes to popularize linux and foss began in 1999. But there were snags. Amongst them was synchronization with the central government's it programme and departmental co-ordination. Applications nic developed for treasuries were in Microsoft's Windows nt and the database management system was db2 from ibm. Other applications had Microsoft Windows on client side, and unix or linux on the server side in mixture or combination. Even now, Kerala's Urban Development Project's double entry accounting package has ms sql and Windows.

Government computerization is sensitive business and linux installations need guaranteed technical support from software firms such as SUN, IBM, HP if enterprise versions are used and turns are as expensive--perhaps even more--compared to equivalent Windows. Also installations procedures for linux are not as easy as default installation procedures for Windows. So there has been reluctance to shift to this system. Non-availability of driver software for devices such as printer/ plotter--easily available for Windows--jeopardizes the popularization of linux. 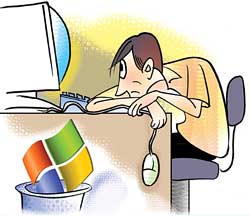 For its IT@School project, the Kerala government started with both Windows and linux and almost all machines had dual boot. But the examination software development was faster in Windows and certified versions were available only for it. So in the first year, the examinations were conducted using Windows only. nic could not get the linux version certified in time, but the next year linux version was also used.

Thousands of desktops in schools were using the unauthorized Windows 98, and the state thought it improper to avail Microsoft's offer for an almost free update to Windows XP at all schools. So the option was to consolidate on Linux. But there is no justification in denying children opportunities to learn Windows. A few machines can be procured with Microsoft products and we ought to have bargained for "real price reductions" for these products availing academic alliance arrangements as done by technical educational institutions.