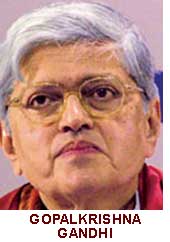 A country of young people lives in denial about scarcity, violence and global warming

What are our times like? Read Chris Patten's What Next? and you will know we have a variety of wise people in our midst. Infosys ceo Nandan Nilekani's book Imagining India is sub-titled Ideas For The New Century. Nilekani reminds us India has the world's largest population of young people. Demographically speaking, therefore, India is the youngest country in an aging world. That gives us reason to think for, work for and hope for survival.

Is our season the spring of hope? No we deny hope a chance. Ours should be called the age of denial. Nine thousand jobs have been vanishing on an average each day, this year. Lay-offs may have crossed the 300,000 mark by now. From electronics and telecom to pharma, job cuts are the order of the day. Not a single person from the postgraduate programme of iim Kolkata has got an overseas placement this year. The Federation of Indian Export Organisations has stated that over 10 million jobs have been lost due to the downswing in exports this year. Sheer greed is responsible, corporate greed based on human credulousness and individual greed.

But we have made little or no change in lifestyles--not in the way we use petrol, electricity. The Mac burger is a good symbol used by Chris Patten. It continues to swell and our collective mouth opens wider and wider for it.

Ours has to be the age of denial. When Mohandas K Gandhi was assassinated many memorable statements were made by world leaders. One went almost unnoticed. It was by a woman. No surprise there. Women are generally unnoticed. The woman was Mary Bethune, founder of the National Council for Negro Women (as it was then called) in the US. She said "As we mothers of the world stand in awesome fear of the roar of jet planes, the crash of the atom bomb and the unknown horrors of germ warfare, we must turn our eyes to the teachings of..." and she invoked the slain man. That was January 1948.

Nuclear States, including ourselves, own 27,000 bombs in their arsenals and nuclear devices can be stolen and inducted by terror organizations. Mary Bethune's grim prognosis is near realization in hands even she would not have imagined. To complete the picture, I must add that mass weapons are in fact the lesser of the dangers of violence facing us. There is the phenomenon of small arms. Small can be deadly.

Can you guess how many AK-47s there are in the world? Google tells me there are 75 million AK-47s in the world today. The Colombian musician and pacifist Cesar Lopez picked up an AK-47 and literally modified it to turn it into a guitar which he named escopetarra, combining escopeta which means gun and guitarra. What a beautiful answer to violence.

The television told me four days ago that there is a euphemism used by terror outfits for an AK-47. You can guess. Lopez would be shocked. Kitney guitar hain tere paas? one don was heard asking a potential mercenary.

General Mikhail Kalashnikov, who designed the AK-47 after retiring, took to manufacturing vodka. If only he had chosen the spirit earlier...

Ours has to be the age of denial. 2009 has been found to be among the five warmest years on record. And the forecast for the next five years is worrisome. Permafrost melts, the Antarctica is getting warmer.

The Intergovernmental Panel on Climate Change has said we can do nothing now to prevent the climate of our planet from rising to at least 1.4oC above the pre-industrial level. If we are able to contain warming at something like 2oC or below, we would still "face some pretty major changes" and if we do not do even that, there will be more droughts in the tropics and mid-latitudes, there will be more Katrinas (not the star, alas, but the hurricane), migrations, conflicts and disease. And yet, what are we doing?

The author is governor of West Bengal