Out of mind and sight

'The temples of modern India', its mega dams, have thrown the lives of many out of gear 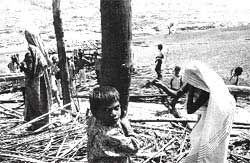 the Hirakud dam in Orissa is yet another "temple of modern India" (as Jawaharlal Nehru called dams), that has left behind unfinished business. "More than 6,000 families have not received any compensation so far, after having been displaced by a dam built during 1948-1957," points out Gopinath Majhi of the Hirakud Bhudianchal Sangharsh Samiti, an activist organisation. The dam oustees had planned a demonstraton in September, to demand compensation.

From 1951-1990, multipurpose dams have displaced almost 16.4 million people in India, says Walter Fernandes, the head of the programme for tribal studies at the Indian Social Institute in New Delhi.

According to the government's national rehabilitation policy, drafted in 1994, eleven million people have been displaced by dams during the period 1951-1990. Only 2.75 million have been rehabilitated, which leaves 8.25 million unsettled. The policy draft, yet to be passed as law, also noted that "they (those affected) have devised their own mechanism for coping."

How exactly have these people handled the situation themselves? In the case of the Hirakud dam, many live on government lands that are still not legally their's. Families who have been living on the periphery of the dam's reservoir are now being harassed by forest officials as their land now falls under the purview of the Forest Conservation Act (1980). According to Majhi, several villages near Hirakud housing the people displaced have been denied both water and electricity, which have been diverted to more prosperous regions of Orissa. At least 100 families dislodged by Hirakud, have attained the rare status of being 'thrice displaced' -- first uprooted by the dam, and later by projects set up by Eastern India Collieries and National Thermal Power Corporation.

Elsewhere in India, people who have borne the brunt of 'development' have not fared any better. Involuntary resettlement has always been a messy affair. The condition of families in their new settlements usually ends up being miserable, with lower standards of living. Very few have actually succeeded in doing well after the shift. Their poor position could be attributed to three reasons. Firstly, 'land in return for land' is a comparatively new policy. Cash compensation was the established norm till recently. Secondly, even in the case of the Sardar Sarovar Project, with arguably the best land-to-land resettlement and rehabilitation (r & r) package, the process is far from complete. Thirdly and more importantly, resettlement has broken family ties and disrupted their livelihoods.

According to Fernandes, tribal communities have borne the brunt as they constitute 40 per cent of those dislocated. "We cease to be tribals," said Christopher Lakra, a Jesuit priest of tribal origin and head of the Xavier Institute of Social Sciences in Ranchi, Bihar, where mines, dams and industries have displaced thousands of tribals. "We have our ancestral spirits and gods in our land," the Jesuit emphasized. Two years back, Lakra's fellow tribals launched a struggle against a threat to their cultural identity. They were objecting to the 710-megawatt Koel-Karo twin dam, perhaps the first in India to be opposed mainly on cultural grounds. Roads and jungle paths were blockaded, preventing the erstwhile Prime Minister P V Narasimha Rao from laying the foundation stone. The Oraon and Munda tribals, did not feel the need to sacrifice their sacred groves for somebody else's god, to make way for another temple of modern India.

I was particularly touched by a visit to Manibeli village in the Narmada valley in Maharashtra. Being a modern consumer with pretensions of being sensitive to the needs of society, it is difficult for me to lobby for the conservation of the spirits and pristine forests of the people of Manibeli. Nevertheless, a few jottings in my notepad continue to disturb me. Manibeli never had a government school, a hospital or electricity. The first road to the village was, ironically, built for bulldozers and police jeeps meant to forcibly evict the villagers before it got flooded. The sarpanch (head of the village) told me that the police hit him with rifle butts for refusing to move. Bulldozers mowed down his crops. Manibeli was flooded to accommodate yet another modern temple. The scene reminds me of the crusades, of the barbarism that accompanies the destruction of others' places of worship to build one's own temple.