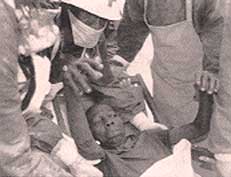 NOWADAYS, there is increased fear that the African environment, especially the tropical forests, contains all sorts of strange and lethal viruses which are sidelining more known tropical diseases like malaria. Nothing exemplifies this better than the "predicted" emergence of the Ebola, which is a haemorrhagic fever virus which causes uncontrolled bleeding and painful death by making tiny holes in the Walls of blood vessels of humans.

The disease emerged in the central African nation of Zaire, famous for its dense tropical forests. However, there are at least two issues that still worry many African biomedical experts and other observers.

As part of the Third World, African nations have always sought help from the West in combating diseases, especially epidemics. But, most African medical experts insist, the emergence and manner in which the killer virus Ebola was handled raises some uncomfortable questions.

A few months after the publication of a highly sensational bestseller, The Hot Zone, by Richard Preston, based on pseudo-science and the tendency to easily associate any lethal microbe with Africa, the "predicted" killer virus emerged from Zaire on April 10, 1995. Too good to be true, and simply the stuff designed to intoxicate US moviegoers!

However, Africans had to deal with a reality which included painful death and unlimited fear. It coincided with the movie, Outbreak, based on Preston's book. While non-Africans thronged theatre halls and were experiencing the thrill of this movie, 300-600 people were dying from lethal infections caused by the highly contagious Ebola. The epidemic, although brought under control, was not without its grim implications.

African epidemiologists and experts did not rule out underhand deals or mishandling of certain lethal viruses by Western scientists in Africa. They already openly say that evidence shows that even the AIDS virus was introduced in the continent, where Western researchers seem to have had a free hand. Biomedical experts from developed nations still evade or fail to truthfully answer questions related to their secret global missions during the late '60s and '70s to collect viruses and what is being done with such stocks.

In Kenya, local and foreign medics were never able to isolate the lethal Ebola virus which allegedly killed a French national, in January 1980, who had visited Kitum cave in Western Kenya. Tests on bats, rats and rodents that lived in and around the cave revealed nothing even with the help of biomedical experts from the Atlanta-based Centre for Disease Control.

Although never involved in controversies, several African experts, including virologist F Tukej from Uganda and K Tsepo from Ghana in West Africa, have said that the source of Ebola still remains evasive. Many experts, however, whisper that there is an urgent need for transparency when it comes to the isolation and storage of lethal microbes because these germs are capable of wreaking more havoc on the human population than can possibly be imagined.

Biomedical institutions in the developed world, no doubt, have helped a great deal to curb epidemics in Africa. But it is also necessary on their part to urgently enlist lethal microbes kept in various laboratories. And microbes can be the easiest thing to smuggle in and out of laboratories and across national borders for several unethical purposes.

The US has never denied repeated claims that it has sent teams of experts to collect all sorts of viruses from across the world for conducting studies and biomedical research aimed at increasing the humankind's ability to combat new and bizarre diseases. And as most African biomedical experts heavily rely on Western institutional support, few are willing to burn their fingers in controversies that may prove to be unprofitable.

Notwithstanding this, many experts also suspect that the din about new lethal viruses are immensely profit generating. Such was the case of AIDS, with Luc Montagnier from France clashing with US' Roberto Gallo in 1995, over the real discoverer of the virus and related patents right which earned their institutions or governments a hefty US $20 million.