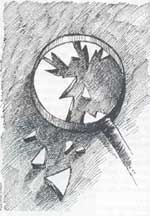 THE setting up ofthe Inspection Panel in September 1993 as a permanent body which will monitor World Bank-funded projects is a significant, far-reaching development. Unfortunately, the World Bank (WB) governing board of executive directors' mode of selection of sensitive areas was highly disappointing. There have been serious objections to the board's arbitrary one-sided decision that has left out the investigation of some fundamental controversies like environmental assessment, indigenous people's X rights and resettlement strategy, regarding the Arun in project.

Economic analyses of the Arun III project, timely disclosure of basic project documents and information by the WB, as well as public participation is of utmost importance. There is a lack of sufficient explanation as to why these issues of controversy were unilaterally removed from the investigation, even though they were specifically highlighted by the panel.

On the one hand, it seems that the WB management - the defendant - has used all available means and tactics to directly influence the board's decisionmaking, since it has the accessibility to do so. On the other hand, the claimants have neither the privilege of such accessibility nor were they ever consulted by the board before it took such decision against calls for investigating alternatives to the Arun in project. Most people strongly feel that this is a serious denial of justice to the claimants and the undermining of a fair adjudication process.

The board's deliberate misinterpretation of the panel's recommendations and the disclosure of information has seriously undermined the credibility of the panel as a new watchdog mechanism to focus on policy violations by the WB. Now there are deep-rooted doubts about the panel's independence &M credibility as an agent to monitor the WB'S compliance with International Development Association (IDA) policies aDd procedures, and its accountability.

Ile board must be aware of the gravity of the debate over the Arun w project, and rising protests against the WB'S indiftect pressure and intervention in Nepal's sovereignty and deciuournaking authority. There is no reason for the board to demand that the panel should "commence field work only after the bank receives a decision from the Government of Nepal, requesting the bank's financing of the project". This conditional decision of the board is pushing Nepal into a "No-option trap". The question here is who will be responsible if the panel's investigations of policy violations are found to be serious enough to jeopardise Arun m's financing. Thus, it is strongly urged that the board reconsider its decision and firmly establish that the WB shall only request the government of Nepal to affirm or negate the project after the completion of a through investigation of all aspects of the claims and a guarantee by the WB that it would fully comply with the IDA's policies and procedure.

The water resource minister, Han Priasad Pandey, has been iterating that is the Arun in project is not a least-cost" or even a "cheap" project. Acording to him, it is an expensive project and the electricity it will Onerate can never be sold at a competitive price. The government also has serious reservations over the lending' conditionalities that are against the long-term interests of Nepal.

It is very important to showcase the credibility ofthe panel by consid ering its conclusions and recommen dations in line with the complete investigation of the project. The board's failure to do so will undou btedly discourage the victims of such projects worldwide, and disempower them from using the inspection process.

The panel backtracked on the central issues of alternatives when it finally recommended to the board that it carry out an investigation on 3 of the 5 alleged policy violations. By not including the issue of alternatives in the authorisation of investigation, the executive directors have hung a question mark on the credibility of the investigation's outcome.

If alternative models cannot be considered in the inspection process in the light of new information and aspirations of the people id the country today, the investigations will run the risk of being an incomplete exercise of limited academic interest.