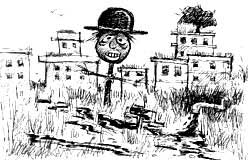 attitudes towards urban farming in Zimbabwe have been changing of late. Its potential to alleviate economic and environmental problems is being realised. Urban farming is the production of crops and the keeping of livestock on land that is administratively and legally zoned for urban uses. Although it has a relatively long history and is widely-practised, urban farming has been undervalued and resisted by generations of public officials. A misconception prevailing among them is that such agriculture competes with and is less efficient than rural farming. Urban farming has often been dismissed as kitchen gardening or marginalised as a remnant of the rural way of life. Myths about the practice, which are a product of cultural and policy biases, abound.

It is seldom realised that urban farming which produces for both subsistence and the market, is kind on the environment and creates employment. There are industries that benefit through the use of raw materials provided by urban farms. The recycling of waste and generation of compost is also promoted.

By law, a resident intending to use a piece of land for cultivation in Harare, the capital city, should get permission from the city council. But the fact remains that many urban cultivators are legally not entitled to these permits because they are of Malawian, Zambian and Mozambican origin. They are descendants of labourers who came to Zimbabwe during the colonial period. The law of the land prevents these people from owning land in rural areas. So many of them reside in cities and practise farming for a livelihood.

As a result, local authorities have been viewing urban farming as being illegal and urban farmers as invaders. They have not been provided clearly demarcated land, their crops have been destroyed and they have been harassed. The farmers know that the lands they are using can be snatched anytime.

Despite such repression urban farming is an increasingly popular practice. The expansion owes much to the country's model of development, which ignores the importance of appropriate landuse management and concentrates its attention on the cities. The continuing displacement of the poor from rural areas, population expansion and cuts in social spending combine to maintain the trend.

Municipal authorities have been indifferent to the needs of the urban poor. City cultivation covers almost all areas, especially open spaces in residential and industrial areas. These cultivated spaces were lands that were reserved for future development. They could also be patches of undeveloped land (dambos) on the fringes of developed pockets.

"Our stance on urban agriculture has been false and unprogressive," says Beacon Mbiba, a lecturer in the department of rural and urban planning at the University of Zimbabwe. "The situation in Harare is so inhuman, environmentally unsustainable, economically inefficient, and politically vulnerable, that it is inconceivable that city planners have for a long time continued as they have," says Mbiba.

Not all have been scornful of urban agriculture. Some politicians maintain that proper steps should be taken to acquire such land, while others are of the opinion that the people who fought during Zimbabwe's war of liberation -- and won independance for the country in 1980 -- have the right to farm anywhere. Finding their own use for these urban farms, the Harare municipality has begun pumping sewage effluent into farmland that would utilise the water and thereby "clean" before it empties into water bodies.

The Harare city council has for some time been trying to work out a common understanding on urban agriculture. The municipality is slowly changing its attitude. There are official programmes to maintain a dialogue with potential cultivators.

Zimbabwe's second largest city Bulawayo, is also working on a comprehensive programme to promote urban farming without damaging the environment. A delegation from the city attended a workshop on sustainable development in the uk in 1994, at which local authorities were asked to consider urban agriculture as a means to uplift communities. Farming in Bulawayo is carried out by seasonal cultivators on designated or zoned areas. Farmers in the city are now better organised as there are now well-demarcated fields, used by specific households each year. According to Mbiba, giving communities a chance and "listening to people" may provide solutions, more so if the people themselves are given the chance to lead.