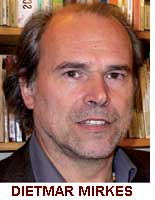 EU's emphasis on carbon credits is a zero-sum game; it will not reduce emissions

On January 28 the European Commission came out with proposals to mitigate climate change. The proposals defined European interests and framed the starting position for the negotiations in Copenhagen. EU's main call is for the global export of its model of emissions trading. Countries that buy emission rights continue to produce emissions. It's a zero-sum game in which huge amounts of money will be moved around, but in the global balance ultimately emissions will not be reduced.

The proposal does have some positive aspects. Encouraging, for example, is the thought that developing countries can only partially pay for their climate protection measures internally, but also depend on external financial support from industrialized nations. It also takes into account, criticism of the clean development mechanism (cdm).

The Commission stresses that measures to reduce deforestation of tropical forests should be included in the national reduction balances of developing countries. Once this happens countries will not want to reduce their balance by trading. But EU's position in this respect is not clear. Tropical forests remain a source of low cost emission rights. They help to deflect attention from the failure of the industrialized countries to meet their Kyoto protocol targets. Behind the emphasis on tropical forests is the widespread misconception that the 20 per cent of current greenhouse gas emissions due to tropical rainforest destruction is also responsible for 20 per cent of climate change as a whole. This is wrong: what is causing climate change is the import of fossil carbon into the biosphere today--although the storage of carbon in trees is of course preferable to its release by burning. EU's claim that there is a great need for investment in the forestry sector in developing countries legitimizes a new field for emissions trading. However, we Europeans can contribute considerably to solving this problem by reducing or ending our demand for timber, soybeans, oil, aluminium and other products from the rainforest.

The proposals do state EU's target for 2020 to reduce emissions by 20 per cent of 1990 levels. But there is no clarity on the question of how much of it is to be achieved in Europe itself. A graph suggests approximately one third of total reductions would be achieved through acquisition of credits and two thirds through domestic actions. But, in fact, already the EU commission's proposal of 23.1.09 enables two thirds of emissions reductions to be met through the acquisition of emission rights. 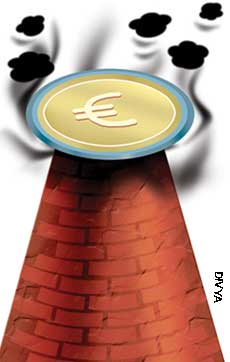 In addition, the Commission proposes "the creation of a robust carbon market in the Organization for Economic Cooperation and Development by 2015". This would enable European energy firms to obtain cheap emission rights on the global market. This will also advantage European private and public banks, such as the European Investment Bank and the European Bank of for Reconstruction and Development vis-a-vis other competitors, such as the World Bank. EU's proposals for a "World Climate Financing Mechanism" or a "Climate Finance Forum" will lead to higher amounts of money in the climate field flowing past UN bodies, towards banking and emission trading sectors.

The Commission invokes the "latest scientific knowledge" according to which "developing countries, as a group, will need to limit the rise in their ghg emissions through nationally appropriate actions to 15-30 per cent below baseline levels by 2020." This demand (without any quantitative expectation of the US) will be seen as a provocation by developing countries. Statements from the Commission such as, "During...this year [2009], these and other economically more advanced developing economies should update their strategies indicating the overall level of ambition up to 2020," are not evidence of diplomatic skill.

The cdm carbon trading market only helps the biggest polluters to cut costs because each tonne of CO2 saved can still be emitted by the purchaser of the certificate. The EU proposal is documenting the clout of European energy corporations and banks.