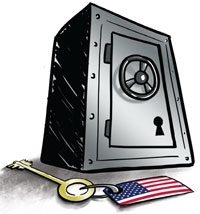 This is  the rather hair-raising story of how intellectual property rights (IPRs) have taken precedence over human lives in complete disregard of the catastrophic effects of a global public health emergency. As the deadly Ebola virus was making its way across West Africa and to other parts of the world, a battle over patent rights on a promising vaccine and its licensing terms was playing out behind the scenes while the World Health Organization (WHO) watched helplessly from the sidelines.

Involved in this story are the Public Health Agency of Canada (PHAC), a government body which initially developed the vaccine and still holds the patents on the vaccine; NewLink Genetics of Ames, Iowa, an American biopharmaceutical company which bought the licence to develop it in 2010,  and sundry other research centres in Europe that are twiddling their thumbs waiting for vaccine samples that will come laden with stiff terms before they can work on it.

So, although the vaccine is reported to have shown promise in both pre- and post-exposure vaccination on monkeys exposed to lethal doses of the Ebola virus, the global effort is stymied by NewLink’s “exclusive licensing arrangement” with PHAC. The vaccine contains a gene for the Ebola surface protein stitched into a livestock pathogen known as vesicular stomatitis virus and the Canadian government is believed to own 1,500 doses. Around a third of the stock belongs to NewLink but a huge number has been donated to WHO.

Scientists, however, have been fretting over the delay in getting an Ebola vaccine out of the laboratory and into the trenches of clinical trials to fight what WHO has described as “the most severe acute public health emergency seen in modern times”.  For months now, virologists at the University of Marburg in Germany, one of the partner organisations, have been waiting for samples of the PHAC vaccine to begin clinical trials as part of a global consortium. Science magazine quoted one of the researchers saying that he was unable to start tests on 20 German volunteers because negotiations between the Canadian agency and NewLink “have needlessly delayed the start of the trial”.

But oddly, the US Department of Defense is once again playing a huge role in getting out the vaccine. Its Defence Threat Reduction Agency and the Walter Reed Army Institute of Research are both involved in the phase I clinical trials of the vaccine which was approved by the Food and Drug Administration in September.

This is the second instance of the Department of Defense investing heavily in fighting the Ebola virus. In an earlier column (see ‘The curious case of Ebola patents’, Down To Earth, August 15, 2014) we had written about its $140 million funding to the Vancouver-based Tekmira Pharmaceuticals Corporation for developing a vaccine. Those trials appear to have hit a regulatory hump.

Vaccines normally take years to develop because of administrative and legal tangles over safety concerns. But NewLink says its “programme has moved forward at an unprecedented pace” and has broken a record. This is probably true. But in view of the extraordinary crisis that the world faces some of the complaints about the slow pace of clinical development are hard to ignore. One such is about NewLink’s reluctance to release information about how the vaccine was manufactured. Regulators need to know because it is key to taking the work forward. As to that, NewLink admits it wants to be in charge of the entire safety trials which it claims is not unreasonable.

All of this highlights how WHO has been unable to put together a framework for fighting health emergencies or for designing a drug development system that can sidestep IPR constraints in a crisis.