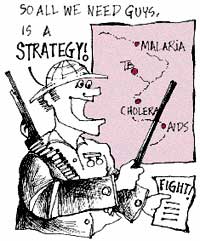 disturbing signals are emanating from the continuing battle for ascendancy between microbes and humankind. Thirty new diseases have appeared on our planet in the past 20 years. Infectious diseases, some of which are staging a comeback for increasing in virulence, continue to be the leading cause of deaths. In the present scenario, a new paradigm of infectious diseases is in evidence due to a multiplicity of factors. Recognition of the paradigm and the factors contributing to it is essential for developing effective control programmes.

Among the factors that influence the new paradigms of infectious diseases are poor living conditions; effects on ecology resulting from human activities under the overall rubric of 'development'; changes in climatic conditions due to atmospheric pollution, deforestation and ozone depletion; wars and conflicts and natural disasters, leading to mass movement of peoples; changes in human lifestyles and behaviour and ineffectiveness of health services. I am taking four examples to convey the challenges presented by these new paradigms.

Incidence of dengue fever in India is assuming alarming proportions. The latest, more virulent manifestation of the disease was first evidenced in Manila, the Philippines, in 1953. In the 1980s and '90s, there has been a westward shift of this new paradigm into India, Pakistan, Sri Lanka and the Maldives. The emergence of the dengue paradigm in the Americas (due to the discontinuation of the yellow fever control programme from the '70s) teaches us that even a year's slackening of vector control measures can bring back the outbreaks.

The Indian government has set up a national advisory committee for disease control through surveillance and response. A two-pronged attack on mosquito vectors - insecticide spraying by official agencies and elimination of mosquito breeding by family and community action - could help. Aerial space spray is often used, as in Delhi, but results are slow. The approach must be complemented by larvicidal application in and around homes where containers cannot be emptied or covered. Also, improved case management through early recognition of manifestations and prompt and efficient replacement of lost plasma can be helpful. The modern treatment regimen for dengue haemorrhagic fever and dengue shock syndrome was evolved by the Thais, who have been able to reduce mortality rate to 2.0 per cent; I have no doubt that our physicians can achieve the same.

In malaria control, all our efforts have come to naught. The problem is essentially due to human-made environmental alterations which help the mosquito vector to breed. The new paradigm of malaria consists of eco-types such as irrigation, urban, development project, migration and border malarias, besides the already existing rural malaria. The revised malaria strategy consists of early diagnosis and prompt treatment and focuses on local transmission dynamics and control based on selective and sustainable technologies. But malaria still endangers 40 per cent of the world's population. Malarial research has not attracted much private initiative. It is a matter of great disappointment that the vaccine developed by the Colombian physician Manuel Patarroyo is now losing ground; recent studies in the Gambia and Thailand confirm this.

A new strain of cholera had emerged in India in 1992 in Chennai. Christened Vibro cholera 0139 Bengal, it spread throughout India and went to Bangladesh in 1993 and then onto Southeast Asia. What happened to the Vibro in between the outbreaks had remained a mystery which led the first director general of the icmr, the late G C Pandit to postulate that the disease was hiding in between the outbreaks in hilsa fish in the currents of Hooghly! No confirmatory evidence had been forthcoming for this hypothesis, but today, algal blooms have been found to be responsible for the spread of El tor cholera to Latin America. In the paradigms that we are discussing today, marine eco-systems influencing human health should find an important place.

With the rising cases of aids, tuberculosis (tb) incidence is becoming worse. Clearly, a better vaccine is needed. The fact that India is not deriving maximum benefits from its own discoveries at the Tuberculosis Research Centre in Chennai is well-known. However, the government is finally unleashing short course multi-drug therapy against TB throughout the country. Case management with such a therapy, case finding with high quality bacteriological examination, improved programme management and directly-observed treatment can lead to a virtual cessation in transmission.

In animal models of several infectious diseases, dna vaccines seem to be broadly applicable for conferring protective immunity to a number of infectious pathogens, for instance, as in the case of tb. To sum it all, for humankind to remain one step ahead of microbial pathogens, foresight is important, because to foresee is to govern.