Government hospitals and doctors, who serve the largest segment of our population, need to be brought under the purview of consumer protection laws 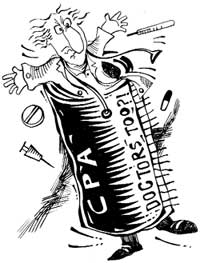 the Supreme Court ruling which held that medical services fall within the ambit of the definition of 'services' of the Consumer Protection Act (cpa) 1986, came after five long years of court battles between medical professionals and consumer protection groups. The medicos had been contending that these courts were incapable of understanding the complexities of their profession. However, consumer activists insisted that protection was a must, particularly when they are totally dependent on the doctors. But though the order cleared many past ambiguities and broadened the scope of application of the cpa, protection remains by and large confined to private hospitals and doctors only.

Government hospitals and doctors continue to enjoy immunity from the purview of the cpa. Why this dichotomy? Consumer activists feel that given the falling standards, government health services need chastising. In fact, a working group set up last year to suggest amendments in the cpa has strongly recommended the bringing of government health services within the purview of the act. The argument is valid if you consider the following figures.

Nearly 74 per cent of India's population is rural-based and of this, 55 per cent reside in distant villages. About 49 per cent live in small villages with populations of 500 or below. The states of Bihar, Uttar Pradesh, Madhya Pradesh and Orissa account for 50 per cent of this population. A study, Rural Markets -- A Perspective , conducted by a chamber of commerce shows that most of the villages lack basic amenities.

This substantial chunk of the population does not enjoy the attention of private doctors or hospitals, which makes the government health care mechanism their only choice. Even in the sprawling cities, the bulk of the population which is economically handicapped, depends on government hospitals. And these are the people who are easy prey to stalking diseases.

Therefore, it is the the state which is providing health care where it is most needed. And people have a right to expect efficient, timely and readily available health care and it is the duty of the government to ensure this. But the prevailing situation is an entirely different tale. Apathy towards patients pervades the whole system, in government hospitals are characterised by unhygienic conditions, where absenteeism is rampant and compared to private hospitals, equipment and facilities are abysmal. In some cases, doctors refuse to treat patients outright.

This is not all. The nexus between government doctors and private laboratories, clinics and drug stores is also well-known. Taking undue advantage of their status in their relationship with the patients, doctors refer them to chosen labs for tests which are often unnecessary.

It is well-known that household medical budgets have been increasing steeply. With the mushrooming of nursing homes and high-priced drugs, health care has become a highly profitable industry. On the contrary, the over-all health standards are continuously declining.

According to some estimates, 80 per cent of the drugs available in India are useless or even harmful. The use of drugs as energisers and tonics is rampant. Doctors have found prescribing medicine more convenient than getting into a dialogue regarding over-all health care.

It is high time corrective measures were initiated. The Voluntary Health Association of India has set up an indepdendent commission which is working on an alternate national health policy. But people must be given adequate channels for seeking justice. With cpa fast catching the public imagination, it will be a great idea to include government health services within the purview of the act.

Patients will be able to comprehend the complexities of medical profession to a large extent if they have a right to the accurate, impartial, relevant, complete and clear information about the ailment and its treatment. And if it brings about a change in the attitude of both the doctor and patient, the health care system will become vibrant.

Let us remember that cpa was formulated as a social welfare legislation, and if it is showing its usefulness, it should be welcomed. Change is always painful. But when it is a positive one, it brings a cheer to one and all in the end.