At a recent conference, women farm workers got a chance to discuss their problems with agricultural experts. 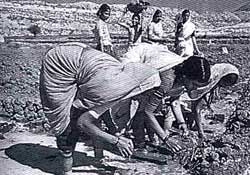 SALINE and degraded soils, inadequate water, poor quality seeds and the lack of means to own land -- these are the main problems that Indian peasant women face. And this conclusion was arrived at not by agrarian economists or bureaucrats, but by peasant women from the villages of north India.

A recent conference of peasant women on agriculture and rural development in northern states, held in Delhi late last year and sponsored by the Centre for Women's Development Studies (CWDS) and the International Federation for Women in Agriculture, was unusual in that it brought women farm workers face-to-face with agricultural scientists. Said Vina Mazumdar of the CWDS, "We hope this will start a process of bringing scientific institutions closer to the problems of peasant women. We are trying to promote the bottom-top approach because this is the only way the voices of the completely marginalised can be heard."

Women representing 15 groups from Gujarat, Rajasthan, Uttar Pradesh, Madhya Pradesh, Haryana and Delhi, overcame inhibitions about expressing opinions in the presence of officials and spoke frankly about the circumstances of their lives. Most of the women who participated were landless. The few who owned small holdings spoke of the difficulties entailed in making small patches of stony soil bear crops. Shanti of Raipur zila narrated why women prefer to work for less money in fields owned by big landlords. "This way," she explained, "at least we are assured of more work for a longer period."

When the women try and organise themselves for better wages or working conditions, invariably, there would be stiff opposition from their own men. One participant revealed, "My husband asks me: Where is your izzat (honour)? How can you speak to other men?" Another described how her husband prevented her from going to a mahila mandal meeting by telling her, her place was in the kitchen. Asked whether women as leaders in the village helped matters, they were cynical. "Women are good when we elect them, but after a while, they become just like the others."
The search for work sometimes has grave social ramifications. For instance, in Dungarpur in Rajasthan, local employment is restricted to one or two seasons in the year. For the rest of the year, families migrate in search of work. Observed one social activist from the area, "We found families get separated in the course of migration and that the people have no access to medical care." This, in turn, led to questions about how communities can do productive work in the villages during the off-season periods without having to migrate.

By exchanging information with an agricultural scientist from the Indian Agricultural Research Institute (IARI), the women unanimously agreed that soil conservation cannot be tackled individually and has to be undertaken on a community basis.

The scientific community seemed divided over the outcome of the conference. D P Sinha, head of IARI's agricultural extension division, felt it was a useful exercise because it provided a common forum to the rural women and made the researcher sensitive to their problems. "The interaction will work only if it is a two-way process. Scientists have the attitude of approving only validated knowledge. Yet, these women have a very rich store of experience from which scientists can learn," he observed.

However, Rahani Raman of IARI's genetic division was more critical. "These women are very intelligent, but they are poor and suppressed. The organisers should have called the block development officers and pradhans of the village to the meet because they are the decision-makers," he said.