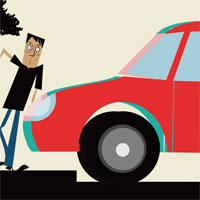 Have you ever noticed the footpath? Does it even exist? And if it does what is its height from the road? What should be the ideal height that allows for pedestrians to walk without fear of being run over or breaking a leg clambering onto it, while not allowing cars to park and take over this public space?

Why am I asking these rather pedestrian questions? Because, quite frankly, these are the questions we need to answer. The only way our cities can crawl out of the quagmire of vehicles and pollution is to promote public transport systems at a scale and pace nobody has done or seen. I say this not out of arrogance; I am stating the imperative. The fact is our cities, with bumper-to-bumper traffic and dangerous levels of air toxins, have (believe it or not) only just begun to motorise. People do not move in cars in our cities, even if choked roads give that impression. In Delhi, statistics tell you that roughly 20 per cent of the city owns private cars. But only some 15 per cent drive to work, school or shop. These car users take up 90 per cent or more of the road space, and over 26 per cent of the city’s urban land is already under metal.

The situation is the same across the country. Therefore, the only option for our cities is to reinvent mobility so that we do not have to drive—we can ride a bus or a train. The aim should be to use road space efficiently; move people, not vehicles. This is not possible unless we plan for what is called in transport lingo “last mile connectivity”. Simply put, we will not or cannot take a metro train or ride a bus if we cannot get to the station or to our destination with ease. Delhi, for instance, has over 150 km of world-class metro facilities. But how does the commuter get to the station? Buses are not easily available or convenient and footpaths do not exist. I cannot walk or cross the street. I cannot think that public transport will change the face of my city.

That is why we need to think of where we walk.

And the cruel fact is that we don’t. Let me reiterate that this is not idle talk. A number of people in our cities walk but they are invisible to planners and a nuisance to car drivers. According to government’s own estimates, roughly 30 per cent of city dwellers across the country commute daily by walking. In Delhi, a comprehensive 2010 study sponsored by the government shows 34 per cent of the daily “person trips” are “walk” only. In addition, 27 per cent walk to take a bus and almost all metro users walk before they can ride.

We are blind to those who walk. That is why pavement is the first casualty of street widening to accommodate cars. That is why signal-free roads are the buzz-road even if it means that there is no light to stop vehicles so that people can cross the road. That is why we make bus stops and then put railing on road dividers; people cannot cross safely. Just stop. Just check how the pedestrian crossing is situated on the road. You will see what I mean.

This is not the only problem. It seems we do not even know the right way to build pedestrian-friendly streets. The international practice is to build footpaths at a short height from the road—most cities mandate 150 mm—which is easy to use. The width is 2 metres at the minimum, allowing two people to walk easily.

Our cities do not have specific codes for designing pedestrian-friendly roads. Instead, road engineers use the Indian Road Congress (IRC) codes for construction. But this association is known for its work in highway design, so till its last revision in 2012 it did not specify the height of the footpath. Road engineers had a field day doing whatever it took to make walking unenjoyable. In Delhi, drains have been covered along the roads to double up as sidewalks. The height is 400-500 mm, so one has to jump or climb.

The 2012 IRC code specifies a minimum width of 1.8 m and a height of 150-250 mm. But now new challenges emerge. As cities lower the height, cars climb over the pedestrian walkway. The footpath becomes free parking. In this way, the vocal minority of car users takes the space reserved for the commuter on two legs. Equity in road space is easy to talk about but hard to enforce.

This is now the design dilemma: what should be the height of the footpath? Should we follow international design standards? Or should Indian planners acquiesce to Indian habits and build practically. The problem is compounded by the fact that the penalty for illegal parking is so little that it does not matter. Cities cannot revise parking fines because these are mandated under the Central Indian Motor Vehicles Act. The Bill to increase the deterrence for wrongful or unauthorised parking has been with Parliament for the past four years.

So what do we do? The answer is to build convenient sidewalks, with barriers to cars. This will require new designs for congested cities, where road space is limited and contested. But how? When? Pedestrian questions are not pedestrian after all. Think and look so that we can walk, not drive.

Walkability and pedestrian facilities in Asian cities: state and issues

The pedestrian and the road