In 2006, a group of scientists wrote an article in the journal, Current Science, highlighting problems wildlife researchers faced in obtaining research permits for work in forests. The article articulated the barriers to conducting wildlife research in India, especially in protected areas. Six years later, many of the issues they raised continue to plague research. While wildlife and conservation biologists across the world develop sophisticated long-term research projects in ecology, Indian biologists are left running from pillar to post in search of the permits.

Certainly, it is necessary to have a system for regulating activities within protected areas. Some degree of control is essential to prevent abuse of facilities by researchers using parks; over harvesting of flora and fauna for specimen collection; and for making researchers accountable to their responsibilities when working in a protected area. The trouble, however, begins when the process of granting permits becomes unnecessarily complicated—an opaque and whimsical process shut out from scrutiny, question or redress.

At present, applying for permits to the forest department has become more of a hurdle that a researcher needs to overcome, rather than a necessary and justified formality. Permits can make or break a study, depending on whether they are issued, renewed, or revoked—or through more subtle insertions of “clauses” or “terms and conditions”. Sometimes, research gets suspended ad infinitum as a result of denial of permits, or arbitrary curtailment of aspects of the research. At other times, researchers are asked to shift their research sites or change research questions. Being told that the research is not “useful” without any other relevant or coherent reason is also not unusual.

Wildlife research often hinges on timing. One needs to consider seasonality, animal behaviour, time of the day or the year, and specific ecological conditions that need to be met for specific research questions. Undue delay, denial, or curtailment of research activities can lead to aborting the project, with deleterious consequences for the scientist’s career. Often, permits just get conveniently lost in the maze of departmental files after many months of hibernation, and the entire process needs to be restarted, causing loss of time and opportunity—a situation especially detrimental to a young researcher with shorter projects and tighter deadlines. Often overlooked, or perhaps ignored, is the quantum of time and effort that goes into thinking and designing a research study – all of which is brought to naught with one stroke, or lack thereof, of a bureaucratic pen.

A major factor contributing to the ambiguity in issuing permits is the law that deals with it. Sections 12, 17B, 28, and 38 of the Wildlife Protection Act (WPA), 1972, deal with research in forest areas. WPA explicitly provides powers to the Chief Wildlife Warden for granting research permits. Currently, research permits are appended under a broader heading of permits for hunting or specimen collection. This unfortunately does not provide a coherent framework in which to evaluate other research activities that do not involve specimen collection. Additionally, the articulation of section 28, dealing with entry into a protected area is open-ended, allowing the imposition of arbitrary conditions. This vagueness has created the possibility of capricious denials of permit, or untenable obligations to be fulfilled by the researcher.

There is no clear-cut system outlined regarding the steps the department needs to follow once application for permits is submitted. There are no timelines to respond to an application. Since the law does not require giving a reason for denial of permits, rejections do not have to be justified. If researchers feel that permits are denied unfairly, or seek an explanation for it, they have nowhere to go. For, there is no appellate authority to address any complaints. Primarily, there is no provision in the WPA that can be used as a legal basis for seeking redressals related to research permits.

Many of the ambiguities in the application and issuance of permits can be addressed with an appropriate amendment of the law. The process for doing so was initiated in 2009, and many wildlife scientists had provided their inputs for the amendment. Following the drafting of the bill, additional feedback was given by a host of students and senior professionals. The suggestions include providing a separate sub-section to deal with the legalities of research and, thus, separate it from hunting related matters. The definition of scientific research was improved in scope and clarity. Most importantly, they articulated clear time frames for issuance of permits, and necessitated an explanation from the forest department for denial. 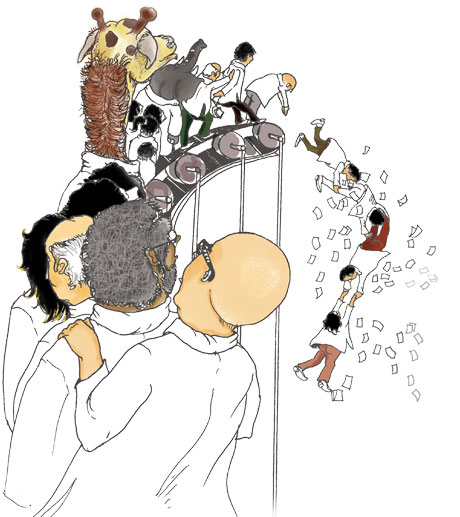 Notwithstanding the suggestions, the final amendment that is proposed to be tabled in Parliament is a rather watered-down version. Further, with none to push for the amendments in Parliament, the bill seems to have gone into cold storage. The first pass would be for the Union Ministry of Environment and Forests to table it in Parliament the amendments related to scientific research. And make sure that it is passed. If the current phrasing of amendments is retained, it will be necessary to make rules that clarify interpretations and lay down clear frameworks for issuing permits. These rules should ideally be made in open consultation with the stakeholders, i.e. wildlife scientists. This process should include non-government scientists also.

A reasonable time frame that does not cause a damaging delay to the research concerned should be established. Next, provisions should be made to prevent arbitrary denial of permits, and to prevent harassment of non-government scientists during the application. The concerned authorities should be asked to provide concrete justification for denial of permits. Like with Right to Information, non-compliance with the stipulated norms should invite penalty. Further, it is necessary to provide for appeals in case of grievances from applicants, either through the court or through an independent appellate authority that has the power to override permit decisions.

Today, the notion among forest managers and bureaucrats is to allow only that science which helps management. This is often used as a basis for denying permits. But, designing sophisticated studies for management interventions or conservation planning needs an understanding of basic ecology—a point regrettably glossed over by many. What is needed is for the government to facilitate all ecological research to create a reliable body of scientific knowledge for species and ecosystems. The only determinant should be quality of science. It would help to set up an autonomous body in each state comprising scientific experts, both governmental and independent, who can review a project for scientific merit, and not merely management use. This body can also oversee the process of granting permits within a defined, and reasonable time frame based on the proposed duration and type of the project.

India has many lessons to learn from Africa. Most famous protected areas in Africa, with high animal densities, are hotbeds of research. The process of obtaining permits has been eased to actively support research, even from other nations. South America is a similar case in point. Long-term studies, unhindered by the red tape, have provided key insights into ecological dynamics.

Science has to be respected for its own worth, not only for its potential use. Compared to the West, India has a poor track record in encouraging research. And wildlife science has always been the forgotten orphan. Although competent, many of our ecologists are unable to match the quality and quantity of western science. A major contributing factor is the difficulty in doing science in protected areas. Research, however, is the cornerstone of development. This is especially pertinent in a discipline like conservation where knowledge of the basic ecology of species and ecosystems is crucial to develop conservation policy. If India wants to successfully conserve wildlife and natural systems, it will have to provide a working space for ecological sciences, both basic and applied. And a start will be to make the law more amenable.

Meghna Krishnadas is a wildlife researcher