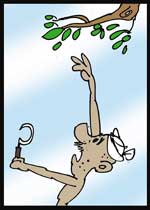 the issue of rights over and the management of forestland, never less than contentious, has triggered off another round of unseemly bickering this time between the Supreme Court and the Central Empowered Committee appointment by it, on the one hand, and the Union ministry of environment and forests (moef) on the other. The battle, on the face of it, looks suspiciously like a turf war. moef wants to constitute the Forest Advisory Committee (fac) on its own terms, while the apex court, its committee and the amicus curiae for the package of forest cases lying before the court are all pressing their powers of oversight unremittingly.

The turf war does not obscure some fundamental issues. One has only to look at fac's remit.Its recommendations are crucial to decisions on the diversion of forestland for development and industrial projects. The court tends to be stringent about such diversion, while moef has a much more latitudinarian attitude. Behind these two positions lie two divergent ways of looking at forests. The first frame sees forest as an abstract, pristine and inviolable terrain that must be protected from all forms of intrusion at any cost. The second shares this view to an extent, but it also privileges the needs of development and is willing to make allowances from that perspective.

What the proponents of both the positions share, however, is a deep distrust and antipathy for the rights of people who live in and around forests and for whom the resources of forests are vital for survival. But their rights over forests have for long been under attack and have, indeed, been severely attenuated over the years. Light emerged at the end of a long, dark tunnel when the Forest Dwellers (Recognition of Forest Rights) Bill was tabled to protect the rights of people who have for a long, long time used the resources of the forests. The light has dimmed with its dilution before being passed by the Lok Sabha. In effect, this is another victory for the doctrinaire ideology of conservation.

That should not occasion any surprise, especially because both parties fighting for the guardianship of the forest represent institutions that are not representative of the people the judiciary and bureaucracy. The tragedy, however, is that even elected representatives are unwilling to stand up and be counted.