Europe is debating a ban on PVC due to environmental and health concerns. Industry is fighting back with a high-profile campaign 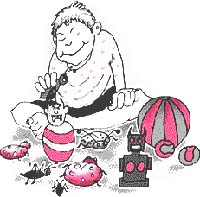 colourful plastic toys may be fun, but could pose a health hazard, too. A scientific committee of the European Union ( eu ), which has assessed analyses from several countries, has shown that when these toys are sucked or chewed by infants, there is a risk that hazardous softeners added to the plastic are released. However, producers claim that this risk is not significant.

Many toys, like hundreds of other products, are made out of polyvinylchloride ( pvc ). There are indications that softeners like phthalates or chlorine paraffins leach from the soft- pvc which can damage the liver, kidneys, reproductive organs or the lymphatic system. Gradually, they concentrate in the fatty tissue, muscles or organs. They can be found in mother's milk, in the atmosphere or in the groundwater. A study commissioned by an environmental organisation has shown that many toys release much higher doses of softeners than is allowed.

While there is hardly any doubt now that soft- pvc is harmful, the controversy is about the magnitude. The industry argues that a child would have to put a toy for ten hours a day in its mouth to receive a dose that may be harmful. Environmental groups, on the other hand, have been leading a campaign demanding a ban on toxic softeners. In northern Germany, for example, protesters cleared the shelves in a shop of the chain 'Toys'R'Us' during Christmas sales two years ago. Several department stores took soft- pvc products off their shelves.

Soft- pvc toys have been banned in seven European countries including Denmark and Austria.Germany will follow suit by the end of 1999. But there is no common stand on the issue in Europe. The European Commission ( ec ) rejected such a ban in 1998. Those opposing pvc suspect that this was due to pressure from Exxon Chemicals, us -toy producer Mattel and the us -Government. Now, with a new ec in office, there is a fresh initiative for an eu -wide ban on soft- pvc teething toys.

However, toys are only the tip of the iceberg, although they affect the most vulnerable. pvc itself is considered environmentally unsound. High content of chloride and additives like cadmium and lead create major problems for waste disposal because incineration of such wastes produces dioxins, which are carcinogenic, and hydrochloric acid. pvc has in the last two decades become one of the most commonly used plastics. Therefore, the main resistance against phasing out of soft- pvc does not come from the toy industry anymore but from the chemical and oil industry, eu insiders inform.

In Germany itself, the production of pvc has been increasing rapidly. Every second window frame, for example, is made of pvc . And then there are vinyl floorings, food packaging materials, furniture, cable wiring, computer and car parts. Most of these products have a life cycle of more than ten years, so the problems with the waste disposal will crop up in a few years. The Commission on Chemicals in Sweden recommended that pvc should be phased out by the year 2007. Substitutes that do not burden the environment have long been available. And there is traditional material like wood or metal for window frames. In Germany, some 100 municipalities have already banned pvc from public building projects.

But other European governments are reluctant. The Netherlands, for example, rejected a strict regulation of production, use and disposal of pvc in 1998. Like the German government, it leaves the safe disposal and/or recycling of pvc -products to the voluntary initiative of the industry.

Meanwhile, industry has built up its own campaign to defend pvc . In Germany, the Arbeitsgemeinschaft pvc and the Environment ( a g pu ), which started at the end of the 1980s and is mainly financed by the pvc -industry, runs a high-profile campaign in magazines and newspapers. Studies, commissioned by a g pu , try to prove that the ecological balance sheet of pvc -products is not worse than that of substitutes. At the same time, it supports research and trials on how to recycle pvc -products. But disposal and recycling still seems the weak point of pvc . Those opposed to pvc say that the recycling rate is still very low (1-10 per cent) and technologies are complicated, expensive and not yet economically viable.

The author is a journalist based in Bonn, Germany