How plastic pollution affects camels in the Thar 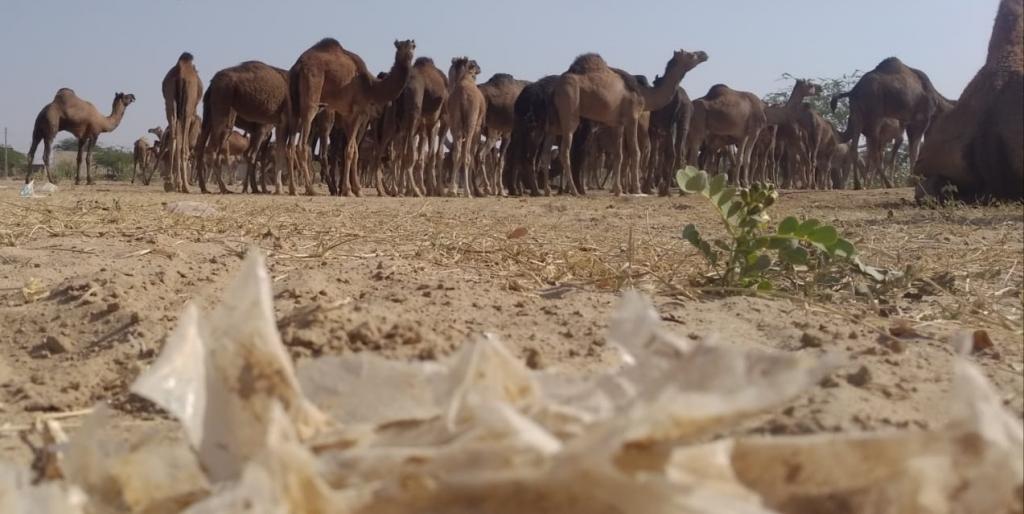 The ingestion of anthropogenic waste, primarily plastic bags and rope by dromedary camels in the United Arab Emirates, has led to a regional mortality rate of one per cent, according to a recent paper titled, The plight of camels eating plastic waste published in the Journal of Arid Environments.

The research defines ingested waste as a ‘polybezoar’, a collection of tightly packed indigestible materials that can include plastics, ropes, other litter and salt deposits trapped in the stomach or digestive tract forming a large stone-like mass.

Since 2008, more than 30,000 camels were evaluated from the region and in the post-mortem of 300 camels, it was observed that they had polybezoars in their stomach.

Polybeozars lead to gastrointestinal blockages, sepsis from increased gut bacteria, dehydration and malnutrition in the ruminants. Out of 24 hours, the camels spend 37 per cent of their time grazing. The browsing nature of grazing makes them more vulnerable to ingesting polybeozars.

Globally, there are estimated to be over 35 million camels, both wild and domesticated.

In India, the camels are used in cultural events and at tourism spots. At these places, the animals would be more susceptible to ingesting single-use plastics and bags.

According to the last Livestock Census, the population of camels hovers around a mere 0.25 million. The opportunity cost of reckless management of solid waste in the desert could result in the deaths of the camels.

On October 2, 2019, Prime Minister Narendra Modi announced that India would phase out single-use plastics by 2022. However, there was no blanket ban imposed and institutions have been given the independence to phase out at their own pace.

The major contention remains that there is no central definition of what comprises single-use plastics and at times, people confuse it with polythene bags. The ambiguity around the definition and the measures to effectively phase out plastic could adversely affect any sort of ban.

Ram Singh, a camel herder from Jodhpur district, Rajasthan says, “I cannot keep a check on what my camels are consuming while grazing. I have a large herd of 40 camels. The animals cannot understand what is toxic for them but at least the locals could be mindful of their waste disposal and management.”

He added, “A few of my relatives have taken their camels to the Sam sand dunes, a popular tourist spot in Jaisalmer district. The waste disposal in the region is horribly managed. Only God knows what the poor animals must be ingesting.”

The Rajasthan Solid Waste Management Policy and Strategy, 2019 is cognisant of the health and environmental concerns associated with inappropriate disposal of waste. However, it fails to separately address the risks to ruminants.

Sumer Singh, who runs a camel milk dairy in Jaisalmer and is a staunch advocate for the rights of livestock and herders in the region, says, “The waste in the Thar desert needs to be managed properly. It jeopardises the well-being of our livestock. We cannot lose our animals due to our reckless waste disposal.”

Due to high winds and the open desert environment, the plastic waste escapes open waste bins and landfills and travels long distances. Improved waste management and alternative systems to package and deliver goods in the region could help in managing our terrestrial solid waste effectively.

Otherwise, the day we see the camels being abandoned by the herders is not too far.