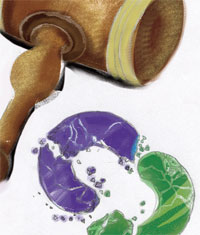 The Prometheus in the headline does not refer to one of the greatest figures of Greek mythology—the Titan who defied Zeus, the ruler of the Olympian gods, to steal fire and give it to humans. For his defiance, this champion of mankind, known for his wily intelligence, was bound to a stake and his ever-generating liver eaten daily by a giant eagle. The most famous treatment of this story is Prometheus Bound, a play by 5th century BC Greek dramatist Aeschylus. Here, we are talking about Prometheus Laboratories, a manufacturer of treatments for cancer and gastrointestinal illnesses.

This San Diego, California-based company has been bound by the US Supreme Court, which has just ruled that it cannot patent a medical test that relies on correlations between drug dosages and treatment, thus ending a crucial legal battle that started in 2004. Prometheus was last year bought by Nestle, the world’s largest food company, presumably to give a fillip to its focus on personalised nutrition.

What the Prometheus process does is monitor a patient’s blood to determine the best dosage for a drug to treat gastrointestinal disorders and autoimmune illnesses. Doctors are told to measure the drug level in the patient’s body and adjust the dosage of the synthetic thiopurine compounds used to treat these diseases. Prometheus’s diagnostic kits, covered by two patents, ensure the best outcome with the least side effects, according to the company.

The court did not buy the argument. In what could possibly set the benchmark on gene patentability cases, the court ruled on March 20 that the diagnostic procedure “adds nothing to the laws of nature that is not already present when the steps are considered separately”. Patent claims that merely describe natural phenomena are not eligible for patents, it said. The genesis of the dispute started in 2004, when Mayo Clinic, a Prometheus customer based in Rochester, Minnesota, came up with its own version of these kits and announced that it would be using its own test. Prometheus promptly sued for patent infringement. In the following legal marathon, Mayo won the first lap when the California district court held that the claimed inventions were not patentable subject matter. However, the Court of Appeals for the Federal Circuit twice upheld the patent and ruled that the Prometheus process was a “transformation” that could be patented.

At the heart of this issue was the question whether the patent claims satisfy the machine-or-transformation test that is applied to decide whether particular methods qualify as patentable subject matter under Section 101 of the US patent law. Could the Prometheus process qualify as “sufficient transformation of the body” to satisfy the machine-or-transformation test? Yes, said the Court of Appeal. However, in his decisive ruling, Justice Stephen Breyer of the Supreme Court said just the reverse. “We conclude that the patent claims effectively claim the underlying laws of nature themselves. The claims are consequently invalid,” he said. More importantly, “the court has repeatedly emphasised ... that patent law not inhibit further discovery by improperly tying up the future use of laws of nature,” Breyer wrote.

The medical fraternity was outraged by the case which came out in a body to oppose the patents. Five top associations of physicians, geneticists and pathologists filed an amici curae (friends of the court) brief in support of the petitioner. “If patent licenses are required for physicians merely to consider newly discovered implications of well-established diagnostic tests and laboratories become indirect infringers merely by educating doctors about those implications, it is hard to imagine how medical diagnostics will continue to serve the goal of quality patient care,” the brief said. But since much is at stake for the biotech industry—there are said to be several thousand such biomedical patents—its lobby groups supported Prometheus in the litigation. The outcome, of course, is a huge disappointment for them.

It’s a case that evokes strong parallels with the Myriad Genetics case on which this column has commented several times. Myriad has patented isolated human genes—BRCA1 and BRCA2—that are linked to inherited forms of breast cancer. Opposing the patents are not just the medical fraternity but also the American Civil Liberties Union (ACLU) challenging the patentability of human genes because it argues that such patents prevent researchers from improving their testing methods and conducting further research. Last summer, a three-judge panel of the Federal Circuit Court of Appeals issued a fractured decision upholding Myriad’s right to the patents. ACLU has filed a petition asking the Supreme Court to review the Federal Circuit’s decision. It sees the decision on Prometheus as pertinent to the Myriad case and as a positive signal for its own case. Such optimism could be premature since there is no telling what the next judge or bench decides.