Put to the horn

Keep out the buffaloes and the cranes will also stay out of wetlands. There is more to controlled grazing and conservation of wetlands than the Indian forest officials and scientists are willing to accept. Here are some lessons from Bharatpur and other parts of the world 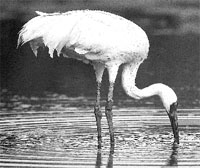 finally , the mystery of the disappearing Siberian cranes in the Keoladeo Ghana National Park, Bharatpur, Rajasthan, has been partly solved. And for those willing to learn in India's wildlife management community, there are several valuable lessons. The birds have either stayed out or arrived in significantly reduced numbers over the last several winters, the reason being -- and you'd better believe this -- the no-entry sign for domesticated buffaloes put up by the park management. No buffaloes led to a proliferation of the weed Paspalum distichmm . More weed in the wetland led to less food. Less food meant no cranes. Krishan Kumar, secretary general of the Keoladeo Ghana Natural History Society, has now recommended the reintroduction of buffaloes to control the weeds.

The ban on buffaloes in Bharatpur was a particularly bloody chapter in the history of human-wildlife conflicts in India. On the strong recommendation of scientists of the Bombay Natural History Society, which included eminent ornithologist Salim Ali, people living around the park were forbidden from grazing their buffaloes in the marshes of Bharatpur in 1982. The ensuing protest by the villagers led to a shoot-out where many were injured.

However, it now turns out that not only were the scientists wrong but that they were out of touch with research in other parts of the world. Wetland specialists from across the world have long acknowledged the role of buffaloes in controlling the spread of weeds in wetlands. Reproduced below is an edited version of the a discussion between wetland specialists and researchers that sparked off by a query from Jordan to the secretariat of the Convention on Wetlands of International Importance especially as Waterfowl Habitat (better known as the Ramsar Convention) in Geneva. This query was put on the e-mail list of the convention, reaching all people who regularly keep in touch with the convention's activities.

Des Callaghan, wetland management advisor with the Royal Society for the Conservation of Nature, Amman, Jordan, wrote to the Ramsar secretariat, looking for information on the possible impact Water Buffalo ( Bubalus bubalus ) on wetland communities in the Azraq Wetland Reserve in Jordan. The enquiry led to an enthusiastic discussion on 'wise use' of wetlands to ensure that they continue to be of value to communities, a basic tenet of the Ramsar Convention.

India is a signatory to the convention and Bharatpur is one of India's six Ramsar sites, though it is currently on a list of sites needing special protection -- a kind of a black list called the Montreaux Record -- as Siberian cranes have stopped coming. The principles of wise use were obviously never applied in Bharatpur, nor were any lessons learnt from other countries who were party to the convention. As Hans Meltofte of the Danish Polar Centre writes, "It was an awful mistake to ban grazing by buffaloes in the Bharatpur sanctuary" and that in European countries, it is a high priority in nature management to organise well regulated grazing in semi-natural habitats.

Why did Indian wildlife scientists not rectify this 'awful mistake' earlier? Why has it taken them so long to admit that the buffalo ban did more harm than good? Why has there been no introspection on their part after Krishna Kumar made a press statement? Is it because they suffer from a pristine park hangover and automatically assume that all human intervention is bad? Or because they have failed to keep abreast of research elsewhere in the world and thus waste time trying to reinvent the wheel every time? As fodder for thought, here is the query from Jordan and the discussion that followed.