CO2 emitted by grey hydrogen is same as that emitted by petrol & 1,000 times more than natural gas burnt directly 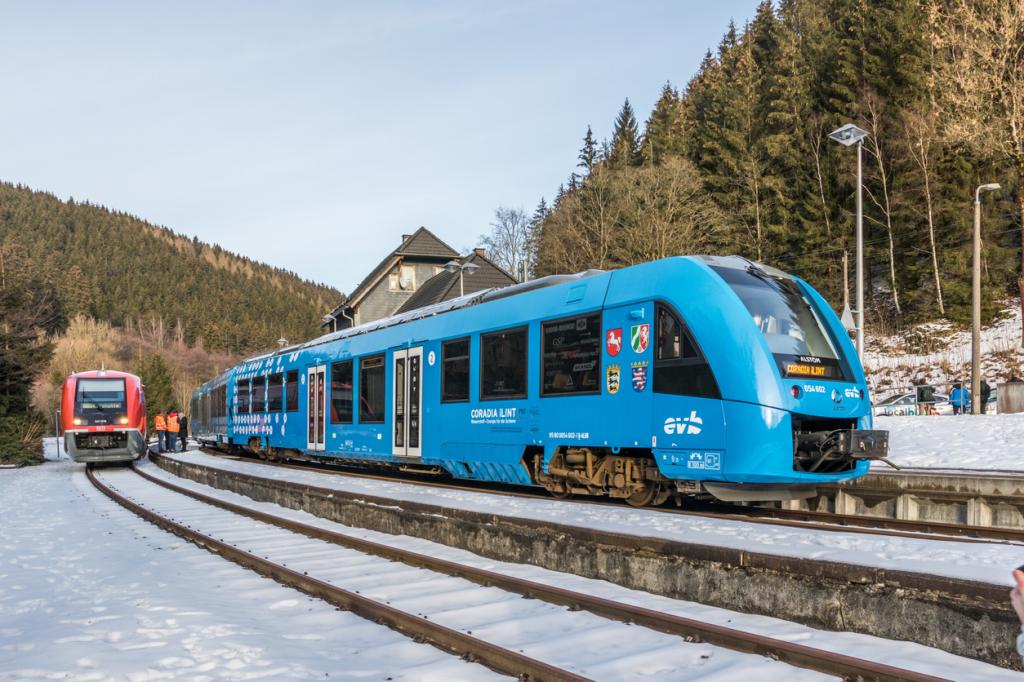 Germany recently launched the world’s first fleet of fully hydrogen-powered trains at a cost of 93 million Euros (Rs 742 crore). These claimed ‘emissions-free’ trains can reach speeds of 140 kilometres per hour and can run about 1,000 km before the tank runs dry.

The vehicles can be refuelled in 15 minutes at customised hydrogen-fuelling stations.

They are powered by what are called ‘fuel cells’ — a special kind of battery that produces electricity when hydrogen (stored in tanks above the coaches) and oxygen (taken from the air) combine. These are then used to power electric motors at the bottom of the train coach.

Manufactured by Alstom, a French multinational that also has operations in India (it supplied coaches for Delhi Metro), these trains were introduced in Germany in a pilot run in 2018. After running successfully for 18 months, Germany decided to expand from two test trains to replacing the entire fleet of 15 diesel trains running on their southern lines.

These trains are designed specifically for the use on non-electrified lines — railway tracks that do not have electric lines running over them or which are too costly to electrify. They were chosen because the existing battery technology doesn’t have the long ranges required for these lines.

Across the European Union, almost half (44 per cent) of the railway lines are not electrified. This leaves lines that require diesel or other long-range alternatives like hydrogen as the only option.

Replacing one diesel train with a hydrogen train reduces the yearly CO2 emission by 4,400 tonnes every year.

The trains themselves are free of emissions but the hydrogen that fuels them may not be as ‘green’ as they are made out to be.

Due to the way it is produced, CO2 emitted by grey hydrogen is the same as that emitted by petrol and 1,000 times more than natural gas burnt directly.

Another alternative that many hydrogen councils across the world are pushing for is ‘blue’ hydrogen, which is grey hydrogen coupled with additional installations for carbon capture and storage incorporated into the production facility.

This way, up to 90 per cent of the CO2 emitted during the hydrogen production can be captured for re-use or storage and prevented from escaping into the atmosphere.

The problem is that this ‘blue’ hydrogen costs 1.5-3 times than grey or even the cheaper brown hydrogen. Currently, only about 0.7 per cent of global hydrogen production is blue.

So if in total, only 0.73 per cent of the world’s hydrogen is actually clean and not contributing to climate change, does running trains that use hydrogen actually make sense? Can these newly launched trains honestly be called ‘green’?

One can argue that this view is too myopic. Perhaps, the world’s forward-looking nations (such as Germany) are using hydrogen as a transition fuel — helping us use existing natural gas / oil infrastructure which will slowly give way to green hydrogen in the future. After all, some industry analysts have been projecting that.

But is that really what’s happening?

In January 2022, Germany’s economy minister Robert Habeck announced a revised plan for renewables and an increase in domestic production capacity of green hydrogen to 10 gigawatts by 2030 from the present 0.07 GW. But where will the hydrogen come from till then?

Germany plans to source its hydrogen from oil and natural gas-producing nations such as Norway, Qatar, UAE, Saudi Arabia, Oman, Chile, Namibia and Australia in the coming years, according to a BBC report.

In fact, the first deliveries from UAE are expected to arrive in the country starting later this year.

So, even in the next decade, it seems like the powerful Organization of the Petroleum Exporting Countries lobbies will continue to dictate energy consumption patterns in Germany – with only the product being changed from diesel to hydrogen.

Although Germany’s Hydrogen Strategy acknowledges that “only hydrogen produced on the basis of renewable energies ('green' hydrogen) is sustainable in the long term”, the fact that they first are sourcing it from traditional oil producing nations is telling.

Until green hydrogen becomes a cheaper alternative, it may just be the oil and gas sector’s convenient way of hoodwinking the masses into thinking it is an easy and green way into the future.

India currently has around 13,500 trains running every day. Around 5,000 (37 per cent) of these are diesel locomotives and the rest fully electrified. This means there is a potential for India to save more than 24 million tonnes of CO2 emissions every year and 2,400 million litres of diesel fuel (and associated costs) if these trains are switched to hydrogen.

However, the hydrogen has to come from abundant renewable energy sources, and not the currently mainstream grey or brown hydrogen so that the country’s path to Net Zero emissions is truly green.