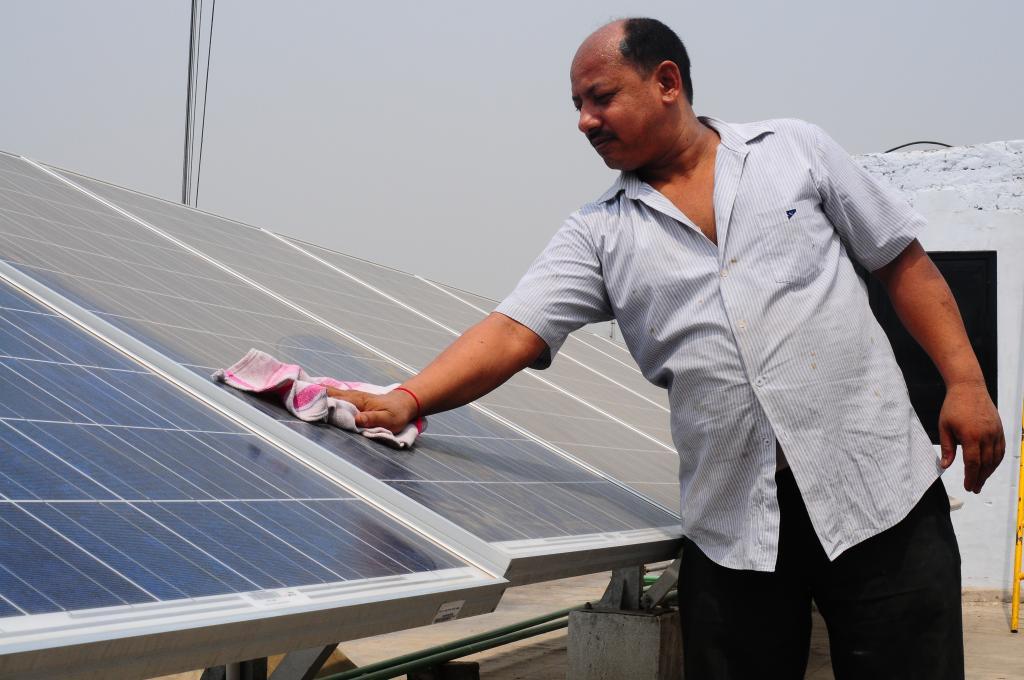 Green bonds will be used to finance projects that reduce the economy‘s carbon intensity. Clean development institutions will be set up to mobilise finance.

Renewable energy (RE), at least on first impression, received less attention than expected. On closer scrutiny, however, there may be indirect impacts on RE from capital goods lists of customs exemptions, among others.

The government will allocate another Rs 19,500 crore for production-linked incentives (PLI) to boost manufacturing of high-efficiency modules, prioritising fully integrating manufacturing units into solar photovoltaic (PV) modules under the government's flagship PLI scheme. This is also expected to provide jobs for youth.

Options to leverage India’s comparative labour advantage to produce solar power equipment and batteries could have been explored by setting a national target of manufacturing capacity by 2030; the Centre could also enable micro, small and medium enterprises (MSME) to produce other non-cell components like glass, ribbons, ethylene-vinyl acetate sheet and others. These account for around 30 per cent of the total cost of a PV module to challenge China’s leadership in the solar PV value chain.

It is yet to be seen whether the PLI volume cap will be changed or it will go to the next set of players. If caps are removed, the PLI scheme could allow companies to reach global scale or be among the top five producers.

In order to reach the solar power production target, it is imperative that the manufacturer, the buyer as well as the service provider come together to provide supportive infrastructure and economic incentives. It can be done with an introduction of new domestic procurement programmes such as the Central Public Sector Undertaking Scheme.

The Budget 2022-23 pointed out the government’s intent to launch a policy that enables the setting up of electric vehicle charging stations at scale. Private companies will be encouraged to model the swapping and land will be made available, Sitharaman said.

Youth and women can be lifted out of poverty and into employment through this intervention. It is important to explore the challenges faced in scaling distributed renewable energy (DRE) and mini-grid projects in remote areas, along with innovative financing options and community involvement in order to achieve sustainability.

Across much of the global South, including sub-Saharan Africa, DRE has electrified remote areas at affordable costs with significant development co-benefits. A similar push may work in India as well.

"In the transition to a greener economy, DRE will be a crucial catalyst in the empowerment of MSMEs, job creation and agricultural reforms. New initiatives to encourage productive use of clean energy in rural areas driven by DRE can be of great value to the rural as well as the national economy,” Jaideep Mukherji, chief executive at Smart Power India.

Budgetary allocations for Saksham Anganwadis development with clean energy facilities is also a positive announcement. This is an impressive step by the government towards its commitment for Net Zero by 2070, Manish Dabkara, founder and CEO, EKI Energy Services Ltd, a developer and supplier of carbon credits, told Down To Earth.  Clean energy will reduce pollution levels even as villages become self-sustainable with its use of clean energy.

In a positive move for both circularity and efficiency, Budget 2022-23 provides financial support to enable coal-fired power plants to co-fire biomass pellets at a rate of 5-7 per cent. It is an attempt to boost farmers' income and mitigate air pollution and curb stubble burning, which reduces greenhouse gas emissions by 38 million tonnes a year.

However, unless states set up infrastructure to turn stubble into pellets, the availability of pellets can be a barrier. Four pilot projects on coal-gasification and coal-to-chemical technologies do not appear to be attractive from a climate change perspective.

To push green infrastructure in the public sector, Budget 2022-23 provides for the issuance of sovereign green bonds, as well as an infrastructure status for energy storage systems, including grid-scale battery systems. The purpose of this is to facilitate the funding of clean energy projects.

The announcement regarding battery swapping indicates we will access electricity from the grid. This makes sense only if the grid is powered by renewable energy. If not, then we are simply moving from one polluting source to another.

The battery swapping strategy will not work unless there is an equal focus on RE. But that requires more flexible electricity infrastructure, which seems difficult at this point in the country.

Apart from solar and electric vehicles, other renewable energy sources, such as small hydro and off-shore wind, are also under-emphasised. The country has various geographies that can see a boom in different energy forms if implemented properly.