The Karnataka government recently signalled its intention to renew granite quarrying licences in the Malai Madeshwara hills in Chamarajnagar district. Quarrying was banned in 1992, when the area was under the sway of Veerappan. But with the sandalwood smuggler out of its way, the state government believes that resumption of quarrying will generate employment for the area's people and also bring revenues to its coffers. It's a familiar argument. Unfortunately it's also a very unsound one. Going by past experience, granite quarrying means bad news not just for livelihoods of the local residents but also for the biodiverse Malai Madeshwara hills.

Spread over 435 sq km, the hills have a mixture of scrub, dry deciduous, moist deciduous and evergreen forests, which are home to a variety to mammals including the tiger, leopard, elephant, sambar and the barking deer. Around 3,200 families--a large number of them tribals--live in and around these forests earning their living through agriculture, often supplemented with minor forest produce collection. The new livelihood sources promised by the Karnataka might seem alluring but they fail the sustainability test.
Most quarries are on hilltops and these will be completely denuded after granite extraction. Soil erosion will increase and there could be irreparable damage to vegetation and wildlife habitat. Areas that used to be quarried 15 years ago in the Malai Madeshwara hills haven't recovered from the toll taken by the activity. And, local people's livelihood options haven't exactly improved.

When quarrying started, the licence holders purchased land from poor farmers at very low rates ranging from Rs 20,000 to Rs 30,000 per acre. Sixty per cent of the wage employment in the quarries went to workers from Tamil Nadu and Andhra Pradesh who had special skills. Of course people in the area were also lured, and many gave up on agriculture. The farmers didn't return to agriculture even after quarrying was banned in the hills: they left to work quarries in neighbouring Andhra Pradesh and Tamil Nadu. As a result more than 50 per cent land in the area has gone fallow, and agricultural diversity has suffered.

Resumption of quarrying is sure to aggravate matters. But the government can mend matters. Farmers should be encouraged to grow seedlings of native fruit trees along bunds to control soil and water erosion and use organic manure. Decentralized seed banks and nurseries can be established with community participation. These interventions will help increase agricultural incomes and positively impact the biodiversity of the area. 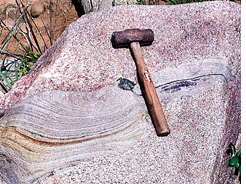 Besides, there are other avenues to create livelihood opportunities. The Lantana camara infestation in the area could, for example, be turned into an economic opportunity. The forest department which spends considerable resources in dealing with this invasive would do well to allow local people to weed it out. Lantana can then be used in crafts such as furniture making. In fact, the Ashoka Trust for Research in Ecology and the Environment is facilitating the training of artisans from the Soliga community in making furniture from Lantana.

Non-timber forest produce (ntfp) extraction could be another livelihood source. Currently people living around the Male Madeshwara hill don't earn much from ntfp collection since the business is dominated by contractors and other middlemen. Harvesters must be involved in monitoring the resource and trained to use better techniques to conserve the species.
Nearly 4,000 people visit the ancient temple of Sri Male Madeshwara in the area. The monthly collection from the devotees goes up to around Rs 30 lakh. But there is hardly any effort to keep the area clean. The more than 60 hectares of temple land can be restored with indigenous trees, and local people can be employed in the conservation.

Ecotourism can be planned in the area and tribal villages situated close to temple can be involved. Addressing these issues can attract more visitors and the revenue can be reinvested in the development of local people. Employment generated this way will be far more sustainable than quarrying.

Siddappa Setty is with the Ashoka Trust for Research in Ecology and the Environment, Bangalore