It is becoming possible to utilise the capacities that exist outside the state -- such as non-governmental organisations -- to influence state policies and, in the coming years, India is going to witness dissatisfaction being increasingly expressed through people's movements. 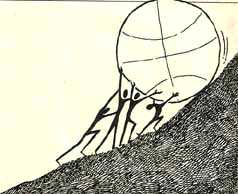 1992 has been a watershed year. Trends that were visible over the last few years came to a head, both globally and locally. At the global level, the events that preceded the Rio summit and took place at the meet were fascinating proofs that micro movements at the community, state, or even country levels, had few links with the debates, planning and policy formulation that are going on at the macro level.

The Rio summit proved graphically that even in Northern countries such as USA and Canada and the European countries, national and regional level movements on issues such as environment, sustainable development and toxic wastes did not find a voice either in the process leading up to UNCED or in UNCED itself.

In India, people's movements against dams, deforestation, struggles for access to water, etc, seemed marginal as compared to the macro-economic policies that were formulated. It was as if there was one part of the country that was involved in policy-making for economic restructuring at a macro-level, opening up the economy and access to resources, and another that was concerned with people's movements and struggles.

In a way, it was also a year of transition. In my view, people's movements, to be successful, must come to grips with the question of macro-policies and macro-programming, both at the national and global level. How they can do this is the challenge posed by 1992. After all, macro-policy formulation processes cannot succeed if they ignore the questions raised by people's movements because that would result in the alienation of the people from these policies.

I think India is going to witness more and more dissatisfaction being expressed through people's movements. We cannot make policies such as cultivating prawns in Chilika lake, exporting rice or other agricultural products without causing a reaction from people whose lives would be affected by such policies.

We have reached the stage where it is possible to utilise the capacities that exist in a sector outside the state -- such as non-governmental organisations -- to influence state policies. If you take some of the recent statements of our minister for environment and forests, you hear him speak a language which, in my view, has been influenced by some of these institutions that have been interacting with the government on forest and environment policies.

However, even people's movements are getting polarised. On the one hand, narrow, short-term aspirations get voiced through political formations, while on the other, activists fighting for long-standing and serious issues are veering around to the view that it is all a question of alternate economics, alternate politics and sustainable lifestyles. You can't have sustainable development with the high consumption lifestyle currently prevailing in the North. The recognition of this fact is making activists more helpless because, as limited movements, they are unable to influence people, which is why people's movements need a more coherent articulation of alternative perceptions.

But I still believe the centrality of people's movements in bringing about significant changes in policies and socio-political issues will continue. The impact of such movements is not always known immediately. It is only on hindsight that we discover that they have left significant impressions on the way people think and live.

So, I believe in the necessity of people's movements as an integral part of any significant socio-economic or political transformation. What we need in this country more than ever is a continued enthusiasm because it is very easy to feel hopeless, marginalised or ineffective.

Rajesh Tandon is the coordinator of the Society for Participatory Research in Asia (PRIA),Delhi.