Reworking of times past

In the race to make a fast buck from Jurassic Park, Spielberg lost a cinematic shot at recreating the complex ecosystem where dinosaurs ruled Earth 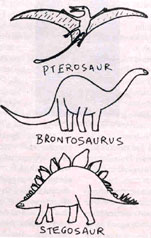 WE TEND to forget that Steven Spielberg's celluloid extravaganza Jurassic Park was inspired by a book of the same name by Michael Crichton. In the novel, when Dodgson of the Biosyn Corp learnt that the rival bioengineering concern, InGen Inc, were secretly developing a park packed with dinosaurs, brought into being by cloning reconstructed DNA of the extinct reptiles, he tried to foresee the commercial advantages his rivals were going to reap. In a meeting of the board of directors of the Biosyn Corp, he said, "And then there is merchandising. The picture books, T-shirts, video games, cups, stuffed toys, comic books and pets."

This prophecy about "merchandising" by the imaginary Dodgson has been realised almost verbatim after the film broke all records at the box office. All dino items mentioned in the prophetic statement -- except the pets -- are selling like hot cakes worldwide. Some Calcutta artists, moulding clay Durga idols in 1994, chose dinosaurs to keep the goddess company. The movie certainly proved very effective in educating people on a world that is lost in the mists of time.

The celluloid storyline has been masterfullly carved out from the contents of the novel, but some modifications would have enhanced the value of the sci-fi masterpiece. While Sauropods, Tyrannosaurus and Triceratops have been ably reconstructed, some picturesque forms like Pterosaurs and Stegosaurs have been left out. Pterosaurs -- the flying reptiles -- were not exactly dinosaurs, but in reptilian classification they are close to dinosaur groups like Saurischia and Ornithischia.

Although the dinos in the movie are lifelike, the physical proportions of the Brontosaurus have not been correctly depicted. The forelegs have been shown almost as long as hind legs. As Romer has pointed out in his Vertebrate Palaeontology, the forelegs were always shorter among the Sauropods, to which group Brontosaurus belong. The right proportions may be seen in the reconstruction of Brontosaurus in the book by Lull and Newman -- Guide to Fossil Amphibians and Reptiles -- in the British Museum by Swinton and also in the huge mural painted on a wall of the Dinosaur Hall of the Piebody Museum of Yale done under guidance of a leading dinosaur paleontologist, Othniel Marsh.

Also, as Crichton pointed out in his novel, the developers, to avoid the food problem in the small island, chose not to breed the larger Sauropods. As the film is based on the novel, it seems that Spielberg did not intend to include the larger Brachiosaurus and that the proportions have been mistakenly ascribed to a medium sized Sauropod, Brontosaurus, due to an oversight.

In the movie, the role and views of Malcolm, the mathematician in black clothes who specialised in Chaos Theory, has been grossly underplayed. Successful recreation and maintenance of extinct life through genetic engineering is a complex system. Besides the complexity of genetic reconstruction from fragments of DNA, there is the complexity of past ecology, a maze of multiple abiotic and biotic factors. Malcolm foretold the failure of the project when he considered the problem of developing the Jurassic Park in light of the Chaos Theory, which he persistently hammered throughout the novel.

The role of Malcolm underlined the significance of a holistic or integrative approach to recreate the Jurassic forests. Merely studying the life of a tree or studying a few species fails to provide an adequate understanding of the forest, which can only be achieved through a critical study of the forest ecosystem as a whole. The reductionist approach -- studying the role of one or few factors at a time in a complex system -- is typical of human mental dynamics. But now we are realising the need to take a holistic approach to adequately understand any complex system.

What the developers of the film were trying to do was to recreate dinosaurs but what they could have also done was to recreate the ecosystem which was their playground. The haste to make the buck as fast of possible by the commercial developers led to a much lamented dilution.

---Rashmi Saxena is associated with the School of Studies in Zoology, Virkam University at Ujjain, Madhya Pradesh, and K K Verma is a freelance writer based in Durg, Madhya Pradesh.