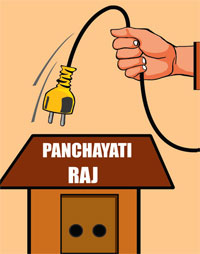 Prime Minister Narendra Modi has delivered on his promise of "cooperative federalism"— getting the states involved in the country’s decision-making and overall development—through the Union budget. Just a few days before the budget, he accepted the 14th Finance Commission's recommendation to increase the share of the states in the central tax pool from 32 per cent to 42 per cent. The budget also kept another promise—to give the states untied funds and letting them design their development programmes according to their priorities instead of the Centre imposing centrally-sponsored schemes. On the face of it, both the decisions are impressive and long overdue.

But Modi’s cooperative federalism, aimed towards a smoother Centre-state relationship, has almost smothered to death India’s third tier of elected governments- the panchayats. A year ago, while campaigning, Modi wanted the panchayat to be to the village what Parliament is to the country. But that commitment has not been reflected in his push for federalism.

The budget has left the fate of ongoing development programmes in the hands of the state governments. These programmes include the Backward Regions Grant Funds, which is being implemented in 272 backward districts to fund their development deficit through the involvement of local governments, and the Rajiv Gandhi Panchayat Sashaktikaran Abhiyaan that aims to strengthen the capacity of Panchayati Raj institutions. Both the schemes, which come under the Union Ministry of Panchayati Raj, have not been allocated any fund. It has been left to the states to decide whether to continue with these schemes.

Quite unbelievably, the budget of the Panchayati Raj ministry has been reduced to Rs 95 crore from last year’s Rs 7,000 crore. It is a death sentence for the ministry on its 10th anniversary. Technically speaking, the cut in the ministry’s budget does not mean panchayats will not get money. They are now supposed to get their funds from state governments. The 14th Finance Commission has allocated Rs 2,00,292 crore to panchayats for the next five years, starting April 2015, and the states will decide on how to transfer this fund to panchayats.

The states have been demanding such an arrangement for a long time. Constitutionally, they are within their rights to make such a demand. But the fact is that they have never been proactive in helping panchayats. In India’s devolution index, the states have performed spectacularly low in devolving funds to panchayats.

It is the most prominent stumbling block in making the world’s largest decentralisation experiment effective. Now that the states have been empowered to allocate funds, what would happen if they continue with their step-motherly treatment of panchayats?

When the Union Panchayati Raj ministry had control over the budget, it could impose conditions on the states to devolve funds. But now the central government cannot do much if the states don’t hold elections to panchayats within the stipulated time period of six months after the local body completes its term. State governments, with all the funds and the control they now have, may further cripple the local bodies.

Almost all the states have the power to terminate a duly-electedpanchayat. But the fear of being denied funds discouraged them from exercising this power. The new mechanism denies this security to panchayats. It is a distinct possibility that the states will now design and develop programmes where panchayats will just be implementing authorities. This kills the spirit of local governance to make people participants in their own development.